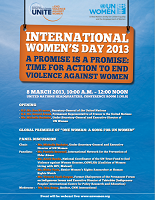 The 2013 theme for International Women’s Day, celebrated annually on 8 March, is:
“A promise is a promise: Time for action to end violence against women”

The first-ever song from the UN system, “One Woman” was launched on 8 March. The song is now available, along with behind-the-scenes videos chronicling the song’s year-long production at http://song.unwomen.org. This musical celebration of women worldwide features 25 artists from across the globe. It is the first theme song for a UN organization.

Join the conversation and follow @UN_Women and the hashtag #1woman on Twitter. You can also donate a tweet through our Thunderclap, which will be released on 8 March.