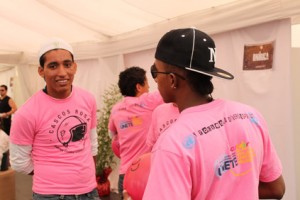 Members of the Pink Helmets network during an awareness campaign for Equality and against Gender Violence (Photo credit: UN Women)

Freddy Calderón and Damián Valencia could have chosen an easier route. At 18 years of age, they could have followed the conventional path for young men their age in Ecuador: going to school, studying and going out with friends.

However, Freddy and Damián understood that things could be done differently and that their chosen path was completely compatible with other more traditional pursuits.

“We are men who are different, they make clear as soon as the interview begins. The initiative to create the Pink Helmets, a network of young men united against machismo, emerged from the final stages of an awareness-raising program against violence of the NGO, Citizens' Action for Democracy and Development. As of today there are 34 young men in Ecuador participating in this movement, a number that keeps growing.

The Pink Helmets published a manual on a new approach to manhood that gathers together more than 30 actions designed to put an end to violence in society, relationships, within family and among friends. Taking their cue from this manual, these young men give talks in schools, streets and participate in music festivals such as the Quitofest (in collaboration with UN Women). These are awareness-raising activities supported by UN Women and the SAY NO UNiTE to End violence against Women initiative, and Citizens' Action for Democracy and Development.

“The question that led to us to found the Pink Helmets was `do we really have to mistreat women to be men? and the answer was emphatically `not at all', explains Freddy. Nevertheless, chauvinist and violent behaviors are widespread phenomenon in Ecuador, where four out of every ten individuals under 15 years of age say that they have witnessed acts of aggression at home, according to a study by the Training Center for Population and Social Development (CEPAR).

Rocío Rosero, president of Citizens' Action for Democracy and Development, points out that some of the young men involved in the network are quite familiar with violence. For the Pink Helmets, their homes are the most difficult battlefield in which to convey their message successfully. “To my mother I say that she should not be stuck in the kitchen but my family regard me as a crazy person and try to convince me that I am too young to understand life, recounts Freddy. Young people appear to be more receptive to this message of change. “We do all we can to explain to our friends that they should respect girls and not treat them as sex objects. The task of driving our message home to young people has been easier and they have changed a lot, in fact they have changed a very great deal.

As we asked them how they see themselves over the next few years. Freddy and Damián replied with one voice: “great leaders, changing the world. Freddy added later on : “a robotics engineer, while Damián said, “a basketball player.

This is a short video (in Spanish) about a network of young men The Pink Helmets and UN Women in their joint fight for Equality and against Gender Violence in Ecuador.

Related News
07/10/2021
From where I stand: “I want to leave a significant imprint in the society”
09/08/2021
I am Generation Equality: Immaculate Akello, climate change activist and lawyer standing up for rural women
13/07/2021
Press release: UN Women presents ‘A Force for Change’, an art exhibition and auction featuring work by 26 Black women artists, benefitting Black women
28/06/2021
Winners of the comic and cartoon competition, “Generation Equality: Picture It!”
13/10/2020
Indigenous women in Colombia-Ecuador border are leading community efforts to end violence against women
END_OF_DOCUMENT_TOKEN_TO_BE_REPLACED