For Chaluay Kawaonag, and her community in the province of Pathum Thani in Thailand, the flood waters that inundated their homes in October were not unexpected. About 46 kilometres from Thailand's bustling capital of Bangkok, they live in the low-lying areas by the Chao Phraya river, along canals that feed the paddy fields. However, no one anticipated the extent of damage that the floods would cause. 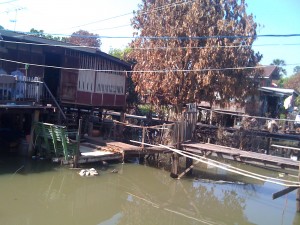 Patum Thani, an industrial province, bordering the capital city of Bangkok, was severely impacted with flood damage from October and November 2011 affecting property, livestock and income. According to the World Bank, overall damage from the floods in Thailand amounts to THB 1.44 trillion, leaving many farms, factories and workers affected, including in Patum Thani province.

With food supplies limited, water levels above 2 metres, pregnant women and babies needing urgent attention, and elderly populations refusing to leave their homes and go to the evacuation centres, community members like Chaluay Kawaonag, as the Chairperson of the local committee, took the lead in coping with the disaster. She worked with a core group of leaders — many of them women — from 28 neighboring communities to mobilize, draw up the daily plan to cook and feed the 3050 households in the area, along with the thousands of outsiders stranded due to the floods. With women and elderly facing different needs ranging from limited mobility to lack of privacy and safety concerns, they gathered boats to bring people to safe quarters like the local temple, to relay messages to the municipality that much more than relief kits were needed, such as medicines and milk powder for the infants, to resolve burglaries and conflicts in the evacuation camps — and through it all to also undertake a mapping study of the population and their needs, in order to be prepared better for the future.

UN Women, is working with the NGOs Chumchon Thai Foundation, the Friends of Women Foundation, and government partners, to support women's leadership in such community-based disaster management response and recovery efforts, in the aftermath of the Thailand floods.

“This impact of the floods was wide-spread and devastating, but it also offered a unique opportunity to mobilize women's participation and leadership in participatory relief and recovery planning, starting with capacity building, community mapping and community moblization, said Ryratana Rangsitpol, UN Women National Programme Officer managing the Thailand Programme. “Government partners plan to share the knowledge and model on gender and community based disaster management gained from projects like the one in Pathum Thani, on International Women's Day, 8 March 2012.

Knowing that floods may come again, Chaluay Kawaonag and her committee of community leaders are now working to educate the populations on undertaking urgent renovations, such as raising the floors of their houses through government loans. They are also working with local authorities to ensure that boats will be available and can transport pregnant women and the disabled to safety first, and to create a designated community centre nearby, for the many who will not evacuate their homes. Through community participation, they are working on their new motto: accepting nature, but coping better.

Related News
Editorial spotlight: Climate action with women
Preparing for disasters, rebuilding in the aftermath
Editorial spotlight: What does gender have to do with reducing and addressing disaster risk?
Placing Pacific women at the forefront of disaster planning and response
Rural Women in Viet Nam Train for a Rainy Day
END_OF_DOCUMENT_TOKEN_TO_BE_REPLACED