Forging a new path: Women at the peace tables in Myanmar

This week, on the 12th anniversary of Security Council resolution 1325 on Women, Peace and Security, UN Women, in partnership with the non-profit organizations Swisspeace and Shalom Foundation, is holding a peacebuilding and negotiation training course for women in Yangon, Myanmar. The course is aimed at building women's skills and confidence, empowering them to play a greater part in peace negotiations.

Mi Kun Chan Non, a representative of the Mon Women's Organization, and one of the only two female observers of the Mon peace talks expressed her hope that the workshop will lead to “a stronger voice of women at the peace table through the sharing of collective experiences and network-building of women negotiators. 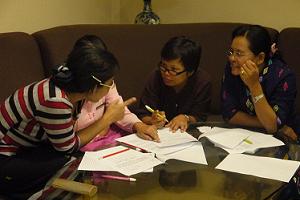 During the four-day training, participants engaged in a role-playing exercise to simulate the experience of being a peace negotiator.
Photo credit: UN Women/Simon Tordjman

Currently there are more than 15 peace processes running simultaneously in Myanmar. Rapid progress has been made in reaching preliminary ceasefire agreements with most ethnic armed groups.

Most of these processes are led by male negotiators and the inclusion of women is still minimal. On the government side, there are only two women in the 52-member Working Committee under the Union Peace Committee. As for the ethnic groups, the Karen is the only one with a female head negotiator and several women involved in the negotiations as experts or observers. The Mon have one woman on their negotiation team and two female observers. The other ethnic groups do not have any women on their team.

For the first time, the four-day training brings together 20 women from seven different ethnic groups, including the Bamar, Chin, Kachin, Karen, Kayah, Mon and Shan, to discuss women's role in peacebuilding in Myanmar and to hone their skills to engage in peace processes. While most of them are from civil society, some are from the government, including a member of parliament.

“Listening to the experience of Karen women who are part of the peace talks, it has given me courage that women can be negotiators said the representative of the Karenni National Progressive Party.

The training was preceded by a one day peer-to-peer discussions, where a smaller group of women leaders shared the current status of conflict in their communities and their personal experiences and challenges in claiming their space in the peace process.

UN Women's 2012 paper, “Women's Participation in Peace Negotiations: Connections between Presence and Influence, indicates that the exclusion of women and of gender expertise can lead to irreversible losses for women's rights. Crucial conflict-related issues of concern to women, such as violence against women, go unmentioned and therefore unaddressed in the arrangements for implementing peace accords.

Security Council resolution 1325 (2000), its sister resolution 1889 (2009) and General Assembly resolution A/65/L/79 (2011) assert that women's security, well-being, and public leadership are central to conflict prevention and resolution. However, a review of 31 peace talks since 1992 conducted by UN Women show that women make up only 9 per cent of the total number of negotiators that have been involved.

The UN Women workshop in Yangon this week will be followed by a 6-month process of mentoring for a group of the women leaders.