I am so happy to be here today with you. I am inspired to see so many women and men shaping your community and holding elected officials accountable.

I am also pleased that your community has taken the decision to elect a woman to lead.

I understand what it means to be a woman leader. I was the first woman in my country, Chile, to become the President, and to be Minister of Defense; I was also Minister of Health. And now I am the first Executive Director of UN Women, an organization created to support gender equality and the empowerment of women.

As I made my way in public office, I strengthened social programmes for women and children, tripling the number of free early childcare centers for low-income families. We elevated conditions for women in the military and police, and improved healthcare for children.

We introduced a number of measures to strengthen women's economic opportunities, tackled domestic violence, and amended the penal code making the murder of women a more serious crime with increased prison sentences. In addition, we undertook major pension reform, so that low-income men and women could lead dignified lives in old age.

We were able to improve benefits for children, women and the elderly by ensuring that the country had the means to afford and sustain them.

Savings from copper in a special fund enabled us to pay for social investments and weather the crushing global financial crisis in 2008 and 2009.

Of course, all of these measures were possible because we had a strong economy, we consulted widely with local people, and we had the political consensus needed to exercise responsible leadership. While not all countries may be so fortunate, all governments have a duty to ensure the well-being of women, men and children and to provide basic social services and social protection. 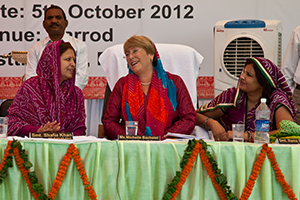 I understand that a large part of your work here is to make sure that your village benefits from the programmes and schemes your government has promised.

And I believe that women leaders do make a positive difference. That is why I am so happy to be in India and with all of you and to listen and learn from you.

Your country has led the way in showing how quotas can make a difference in raising the voices of women and getting more women in politics. I am told that in India there are almost 40 percent of elected women representative at the local level - around 1.5 million. This makes India the world's largest experiment in grassroots democracy.

Democracy is based on the principle of representation - and you cannot have representation of a population that is half women without having them take part in decision-making.

Women and men bring their own unique perspectives. One is not better or worse. The perspectives of women and men are different and complement each other. I have seen for myself how decision-making improves when men and women join forces and lead together.

Secondly, you can find ways to translate strong women's leadership into meaningful change to laws and policies that will impact the well-being of all women. For example, women and children's health remains a major challenge for India. As elected women leaders, you can use your influence to build coalitions to improve the health and well-being of women and children.

I also take this opportunity to address men who are present here. I already spoke about equality in decision-making and politics and how the best decisions are made when women and men lead together. Now I want to congratulate you for electing a woman leader. You made a wise decision.

Women are good leaders. There is enough evidence to show that when women take greater control of household income, more money is spent on children's needs including food, health and education - in short, it benefits the next generation. When women are active in politics and business, there are improvements in the public good and the economy.

And while laws, policies and programmes are absolutely essential to bring about justice and equality, it is also true that real change begins at home. Real change comes when the voices and choices of women and girls are heard, and when girls and boys have the same opportunities to reach their potential. Changes in the family reinforce changes in laws and policies towards a more equal society.

I am proud that UN Women and the Government of India with the support of Norway are working together for women's political leadership across five states in the country.

I take this opportunity to congratulate the Government of Rajasthan for making Mahila Sabhas mandatory. Based on the philosophy of Mahatma Gandhi, I acknowledge that this is an important forum for women to articulate your concerns, share solutions and bring it to the Gram Sabhas.

When women fail to attend Gram Sabha meetings, there is the risk that their interests may be sidelined. So it is important for you as women to participate actively because then the Gram Sabhas will function more effectively. I request you all to come in large numbers to the Gram Sabha meetings to share your demands and aspirations.

The Gram Sabha - such as your gathering - is the cornerstone of this great venture of equality and democracy. If you succeed, you will change India and the world for the better—and the change will be felt now and for generations to come.

On behalf of my team in India, I thank you, and I commit UN Women's support to you.