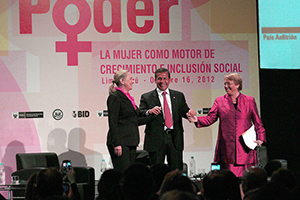 15 October 2012 — On Tuesday 16 October, the Under-Secretary-General and Executive Director of UN Women, Michelle Bachelet, will begin an official visit to Peru, which will start with her participation at the international conference entitled “Power: Women as Drivers of Growth and Social Inclusion, alongside President Ollanta Humala Tasso and the US Secretary of State, Hillary Rodham Clinton.

She will later hold meetings with the country's top authorities, including the President, government ministers, women leaders from various political parties in the Congress of the Republic, civil society, and women who have benefited from some of the projects implemented by UN Women in Peru.

The main themes she will address during her visit concern public budgets, with an emphasis on gender, women's participation in politics, decent work for female domestic workers, the eliminations of violence against women and Peru's recent adoption of the National Plan for Gender Equality.

During the visit, Ms. Bachelet will be awarded an honorary doctorate by the Cayetano Heredia University, and will also receive the keys to the City and Municipality of Lima.

Watch live streaming video from powerofwomen at livestream.com
Related News
16/10/2012
“Power: Women as Drivers of Growth and Social Inclusion”: speech by UN Women Executive Director Michelle Bachelet, in Lima
18/10/2012
The Executive Director of UN Women meets representatives of civil society before concluding her visit to Peru
12/07/2011
Tackling Gender Inequality on Multiple Fronts: An Agenda for Women and Girls for the Decade
16/06/2011
Executive Director of UN Women to Focus on Central Role of Women in Democracy on First Official Visit to Tunisia
16/04/2011
Michelle Bachelet’s Keynote Address to the Inter-Parliamentary Union General Assembly
END_OF_DOCUMENT_TOKEN_TO_BE_REPLACED