“Before she was murdered, she wasn't alive. We'll tell her story backwards from her murder to her birth… begin the Arabic rap lyrics, soon interlaced with a mournful chorus from the renowned Palestinian soloist Amal Murkus. 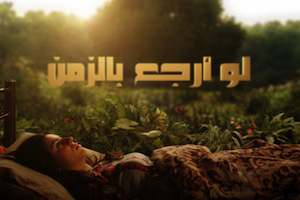 As if rewinding a video in slow motion, you see a young woman's expressionless face on a bed in the forest; her body floats back to a standing position; a bullet enters her forehead. Her brother is pulling the trigger.

This is the opening scene of the powerful new music video If I Could Go Back in Time, the title track of the up-coming album Dabke on the Moon by the critically acclaimed Palestinian hip-hop band DAM (Da Arabian MCs), launched globally this week on the UN Women website. The video is an exclusive collaboration between DAM and UN Women, which supported and funded this state-of-the-art production aimed at mobilizing youth.

Using catchy visual effects and soulful lyrics, the video aims to raise awareness among Arab youth of so-called “honour killings, the murders in the name of family honour of women at the hands of close family members, usually because she is suspected of infidelity, pre-marital relations, or defying the family's choice of marriage partner.

The video tells the story of a young Arab girl who has lived a life of pain and decides to run away from home after her parents try to force her into an arranged marriage. But her plan is thwarted when her unsuspecting mother gets a call from the airline about her flight being delayed. Her father and brother stuff her into the trunk of their car, take her to the woods and shoot her in the forehead.

“Without shame, her brother puts his gun in his pocket the song continues, with what are at times purposefully raw images and lyrics: “It's the first time in her life that she says “NO!

Across the world, the United Nations estimates that 5,000 women and girls[1] are murdered and abused every year by male relatives as punishment for a range of behaviours judged to have damaged the family reputation. Between 2007 and 2010, 29 women in the West Bank were reported murdered in the name of honour[2] and at least nine cases have already been reported since the beginning of 2012[3].

‘If I Could Go Back in Time' is the chronicle of a death foretold; the murder of a young woman for having her own aspirations in life, says Alia El-Yassir, Special Representative of the UN Women office in the Occupied Palestinian Territory.

“UN Women sees in the mobilization and engagement of youth, men and women together, a vital element to bring sustainable change, the opportunity to support a new wave of advocates to combat violence against women and intensify the efforts of women's and human rights organizations in demanding reforms of laws and systems.

Given that many countries still have laws that protect men who murder female relatives, the music video, to be widely broadcast on the Internet and television networks across the Arab States Region, aims to mobilize youth in combating all forms of violence against women and support the work of women's advocates and human rights organizations in changing the laws that support this practice.

The video was directed by the award-winning documentary-maker Jackie Salloum, and Suhel Nafar of DAM. The all-male band is among the first Palestinian hip hop groups and the first to rap in Arabic. 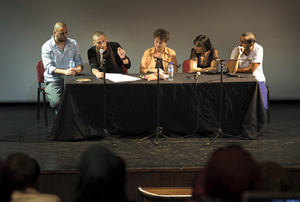 “We feel that when there is a crime against a woman, it is seen as the end of the story. No one asks the right questions; no one tries to shed the light on the human face; it is just another death. A death justified merely by the fact of being a girl, said band member Tamer Nafar at a press conference held in Ramallah this week.

“We wrote this song because we think that everyone should have this opportunity to do what he/she aspires and be allowed to dream, he said.

“No one should be denied this opportunity and right because she is born a girl!

“Congratulations, it's a girl, the video brings you back to the beginning of the woman's life, and ends with an empowering final message in Arabic script: “Freedom for my Sisters.

[3] The Al Muntada Coalition - Forum to end violence against women, as well as the Palestinian Independent Commission for Human Rights, have recorded 9 cases reported in the first 9 months of 2012. Al-Muntada Coalition estimated that the figure was 12 women in total at the end of October.

Related News
24/03/2016
What if we switched roles? new social experiment raises awareness of gender stereotypes in the Arab region
12/05/2022
Statement by Sima Bahous, UN Women Executive Director, on the killing of Shireen Abu Akleh
05/01/2021
Helping survivors of violence seek justice through forensic science in the West Bank
18/11/2019
The men who are standing tall against early marriages in the Gaza Strip
05/03/2019
Safe spaces for women, by women, bring smart infrastructure for all
END_OF_DOCUMENT_TOKEN_TO_BE_REPLACED