How women and girls are faring: Charting progress on the Millennium Development Goals 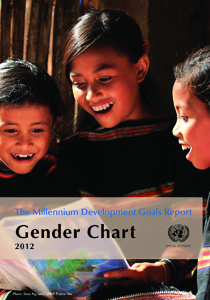 The eight Millennium Development Goals (MDGs) provide a framework of time-bound targets by which progress towards the commitments of the internationally agreed Millennium Declaration is being measured. In 2012, with three years left for the 2015 deadline for the MDGs, women continue to be poorer than men on a global scale. More girls are in primary school, but big gaps remain in secondary school, and the poor are still less likely to attend. And while women now account for nearly 20 per cent of all parliamentarians around the world, it will take more than 40 years to reach equal representation at this pace.

These are just some examples of how women are faring in global progress towards the Millennium Development Goals (MDGs), detailed in the 2012 Gender Chart.

With colourful graphs and striking statistics, this just-launched addendum to the UN Secretary General's 2012 Millennium Development Goals Report focuses specifically on Goal 3, which calls for gender equality and women's empowerment and also tracks the impact of gender equality on the achievement of each of the remaining seven MDGs.

By looking at the other goals from a gender perspective, the MDGs Chart also emphasizes the inter-linkages between the goals and the important role that gender equality and women's empowerment plays in development and the achievement of all of the MDGs.

“If you think about the first Millennium Development Goal on hunger, it's now widely recognized that food security is dependent on supporting small-scale farmers to produce enough food for themselves and their families, and the majority of small-scale farmers are women, says Laura Turquet, manager of UN Women's flagship publication, Progress of the World's Women “So I think it's clear that achieving gender equality impacts on all of the Goals.

Turquet notes that the Millennium Development Goals that are most off-track — the ones that are the least likely to be achieved — are the ones that depend on achieving gender equality. “Reducing maternal mortality is unfortunately a goal that's far away from being achieved and, of course, that fundamentally requires that women achieve their rights and are able to make choices about when they have children.

The Gender Chart 2012 shows that although there has been some progress in a number of the gender dimensions of the MDGs, such as in education and economic gains, more needs to be done — in every country and at every level. This is particularly true when it comes to achieving the pivotal third MDG and to reducing persisting levels of inequality. Women and girls from less affluent countries, communities and families are still consistently left behind.

Jointly produced by UN Women and the UN Statistics Division for the Inter-Agency and Expert Group on MDGs Indicators, this publication aims to chart progress towards the time-bound targets set by world leaders in 2000.

With the 2015 deadline for reaching the MDGs approaching, UN Member States have reiterated their commitment to the Goals but the process is already underway to revise them, post-2015.

The Millennium Development Goals Report: Gender Chart 2012
The biennial MDGs Gender Chart depicts the situation of women and girls in developing regions as reflected in a number of indicators that are used to monitor the MDGs. It shows that although there has been some progress in a number of the gender dimensions of the Goals, more needs to be done, in every country and at every level, to achieve the pivotal third MDG and to reduce persisting levels of inequality based on sex, wealth, location ethnicity and other markers of disadvantage. It is being co-produced by UN Women and the UN Statistics Division for the Inter-Agency and Expert Group on MDGs Indicators. Read more »