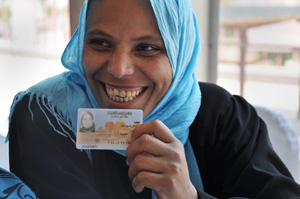 Four million women in Egypt don't have an ID card. Not having and ID card means that these women are not entitled to access financial services like credit and loans, as well as education, healthcare and other social services provided by the Government. Their political rights such as voting or joining a political party are also limited.

One year after the revolution in Egypt, the Ministry of State for Administrative Development, the Social Fund for Development and the Civil Status Organization, supported by UN Women and UNDP have launched the Women Citizenship Initiative, a three year project which aims to provide ID cards to women who do not have them and thereby ensure their basic rights as citizens during the democratic transformation in Egypt.

The Initiative plans to issue two million ID cards enabling poor and disabled women and those in rural and marginalized areas to have an impact on the political process as voters and on the economic and social structures as citizens. The main objective of the project is to increase women's political participation and enhance their economic positioning.

The first phase of the Women Citizenship Initiative, the registration process, began in April in Qalioubiah, a governorate located in the Nile Delta region, Lower Egypt. In July, 300 national IDs were issued. A total of forty thousand IDs will be issued to women in Qalioubiah as part of this first phase.

Ghada Wally works as Managing Director of the Social Fund for Development in Egypt and has been involved in the Women Citizenship Initiative. According to Ms. Wally “lacking an ID card is equal to lacking rights. It is a small piece of paper but it means a lot to Egyptian women. Watch the full interview with Ghada Wally on the importance and impact of the Women's Citizenship Initiative.

Related News
10/01/2013
Through film and life, rural women address poverty and early marriage in Egypt
24/05/2012
Egyptian women cast votes and rally for their country’s future
10/03/2021
This is what leadership looks like: Meet Caroline Fattal, one the “most powerful Arab women in business” dedicated to supporting Lebanese women entrepreneurs
06/07/2020
Despite compounding challenges, women in Iraq play vital roles in the country’s COVID-19 response
27/08/2018
Historic leap in Tunisia: Women make up 47 per cent of local government
END_OF_DOCUMENT_TOKEN_TO_BE_REPLACED