Q&A with H.E Khawar Mumtaz, Chairperson of the National Commission on the Status of Women, Pakistan 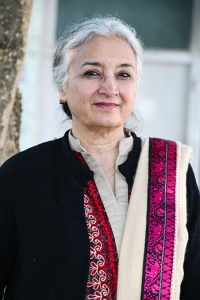 Khawar Mumtaz was recently appointed as the Chairperson of the newly enacted National Commission on the Status of Women, in Islamabad. Photo credit: UN Women/Atif Mansor Khan.

In light of Pakistan’s fourth periodic report to the CEDAW Committee in Geneva on 12 February, UN Women spoke to the recently appointed Chairperson of the National Commission on the Status of Women (NCSW). The new and autonomous Commission became part of the constitution on 8 March, 2012. The Commission will function to protect and promote the social, economic, political and legal rights of women. It will work closely with provincial Governments to ensure that provincial commissions on the status of women are also established. 12 February also marks the 30th anniversary of brutal police action against women in Pakistan who were peacefully taking a petition to the Chief Justice of the Lahore High Court against a Law of Evidence that gave a man’s testimonies twice the weight of a woman’s.

As a human rights defender and a founding member of Pakistan’s Women’s Action Forum, can you give us an overview of your personal trajectory from 12 February, 1983 to this 12 February, 2013, marking the 30th anniversary of a landmark women’s march against discriminatory laws?

I would not define myself from February 1983 to February 2013. It has been a journey for rights for a long time, starting with the rights of the underprivileged and deprived. But in 1981, when the Women’s Action Forum (WAF) was formed –and I have been associated with it since then — there was a concentrated focus on women’s rights. Since 1947, we have had progressive legislation for women, opportunities for women and representation in assemblies. There was a sense of movement forward. The 12 February 1983 police action against women who were peacefully taking a petition to the Chief Justice of the Lahore High Court against a proposed Law of Evidence, broke down the barriers of any reservation among women about coming out and demanding their rights. For me, this was the most defining moment. The earlier one was the formation of Women’s Action Forum. Over the years, WAF has taken up many landmark cases, spoken out in defense of a broad spectrum of women’s rights. The movement has produced many activists and some of them are now sitting in Parliament and promoting the passage of pro-women legislation.

Could you tell us about the top three priorities that you and the Commission members foresee for the current year and years to come for the NCSW, and tell us where CEDAW, its implementation and reporting fall within this ambit?

The challenge is to live up to expectations for the new autonomous and independent NCSW, with its expanded responsibilities and mandate. The three immediate tasks of the Commission are to firstly build a solid foundation that will support the Commission in administering and taking forward its mandate. Secondly, we need to devise mechanisms to operationalize existing laws and policies across the country, with smooth communication from the provincial to the national level, to ensure that provinces reach those who are violated and/or are prevented from accessing their rights. And thirdly, the Commission needs to focus on violence against women, to identify measures and recourse necessary to ensure that justice is actually done.

Pakistan is strongly committed to CEDAW and has taken a number of initiatives, including: the Benazir Income Support Programme that provides monetary support to women in the poorest households, establishment of the Gender Crime Cell to document cases of violence against women, and enactment of a number of pro-women laws. But this is an ongoing process. From one CEDAW report to another, the gaps have to be addressed and filled. NCSW substantively supported the preparation of the fourth periodic national CEDAW report with support from UN Women, and formed a multi-stakeholder group comprising Government and CSOs, to provide inputs into the report.

The 2007 CEDAW concluding observations highlight a number of structural issues, as well as a sense of urgency with which these should be addressed. For Example, Qisas and Diyat[1] law with reference to the cases of violence against women, along with, for example, unavailability of comprehensive, verifiable disaggregated data on violence against women. Do you feel there has been a change in the situation in the last five years? If so what kind of change and how?

The Qiyas and Diyat law is still a challenge, as it needs to be changed. Repeal and amendments of laws is done by the Parliament and requires consensus; unfortunately that has not happened yet. This is a major concern of the Commission, as well as others, who seek justice and equality of citizens. Disaggregated data on violence against women is to be collected by the Gender Crime Cell, but retrieval systems from police stations across the country need to be further strengthened. The Commission will be examining the systems and looking at ways to put more stringent retrieval and documentation systems in place, and will advocate for better training of police personnel in registering gender violence cases and collecting accurate data.

What kind of impact, if any, do you feel the series of pro-women legislation has had in addressing some of the salient CEDAW concluding observations adopted in 2007? If not, what measures do you think could be taken for more effective implementation of these pro-women legislations?

The most important impact of pro-women legislation is the recognition of a range of gender-based violations. If there is a law against anti-women practices, then there is a recognition that anti-women practices exist. While great progress has been made in the last few years on pro-women legislation, implementation remains weak. Operationalizing the law in the backdrop of customary practices and mindsets is very challenging and requires creative strategies.

The lack of general awareness of the existence of laws, even among the judiciary, police, and Government officials, is a contributing factor to lack of implementation. The Commission will work to increase awareness to ensure that there is access to laws and thereby ensure access to justice. Jirgas [2] need to be addressed frontally. Although the Supreme Court has called for the elimination of such forums, they continue to persist. The Commission is already in the Supreme Court with a petition against Jirgas but considering the traditional aspects of these forums, perhaps it needs to be looked at more creatively. While the Jirga may be effective in settling political disputes, disputes that affect women and crimes against women need to be referred to other mechanisms. Although there is no documentation on the number of cases that arise in a year, the fact that women are not represented in the Jirga, and that there is absence of due process is reason enough to remove disputes covering violations against women from the domain of the Jirgas.

What role do you think civil society organizations (CSOs) and international development partners, including donors and the UN, can further play to hold State systems accountable for compliance with international covenants/conventions, including CEDAW?

CSOs are the watchdogs on violations and many now have the expertise, information and knowledge, not only for Pakistan as a whole, but at the grassroots level. We look to CSOs to give us insights for developing stringent policies and, in many cases, to be our partners in terms of creating awareness of laws and tracking implementation. They are really the conscience of the Government. The international development partners have played a critical role in creating evidence to support advocacy, and in raising awareness on international commitments. They have also played an important and significant role as not only facilitators, but through extremely meaningful support in regional and global best practices. However, international development partners have, recently more often than not, taken presumptive decisions on which frameworks they are going to support, frameworks that may not necessarily be the highest priority for the CSOs. There needs to be a much better match between what is needed, as identified by local organisations and people, and the frameworks of the international development community, given their own accountability considerations at home.

Do you think that the Malala Yousufzai incident is a stark reminder of the theme of last year’s National Women’s Day commemoration – ‘March on, the destination has not yet been reached’[3]?

Women have to be seen as equal citizens, have to be protected, and have to be given their rights. Malala Yousufzai shows that elements exist that believe that women do not have the right to pursue their desires, their dreams, their destinies and that if women are given their rights, they will become destroyers. We also need to be more vigilant in our governance and in this regard, it is very important to restore the local Government system. This was really the trigger for women’s political participation and was the political school for women, particularly after devolution. Devolution to the provincial level has happened and must now be extended to the local level. While a lot of progress has been achieved, the destination has certainly not been reached! There is still a long way to go.

[1] Qiyas and Diyat law are part of the Shariah and allow for out-of-court settlements through retribution, compensation, or pardon.
[2] A decision-making assembly of male elders; most criminal cases are handled by a tribal Jirga rather than by laws or police.
[3] Translation: Pakistani Poet Faiz Ahmed Faiz famous line: Chale-chalo ke wo manzil abhi naheen aayi

Abolishing Sang Chatti: Pakistan works to prevent compensation marriage and other forms of violence against women

As Pakistan prepares for review by the CEDAW Committee of its fourth periodic on 12 February, we take a look at what has been done to crack down on Jirgas and implement other CEDAW recommendations related to ending violence against women.

Related News
31/03/2014
Press statement by UN Women Executive Director in Tokyo
11/02/2013
Abolishing Sang Chatti: Pakistan works to prevent compensation marriage and other forms of violence against women
15/08/2022
In focus: Women in Afghanistan one year after the Taliban takeover
25/07/2022
Press briefing: The situation of women and girls in Afghanistan
10/12/2015
Asia-Pacific makes strides in implementing CEDAW
END_OF_DOCUMENT_TOKEN_TO_BE_REPLACED