Tajikistan moves towards a law to prevent domestic violence

“I was punched by my husband several times — that made me decide to leave him,” says Humo Amonova*, a 46-year-old woman who lives in a small village in the district of Sughd Oblast, in northern Tajikistan. Married at the age of 20, she says her life became a nightmare due to physical violence from her husband.

“It was a difficult time for me,” she says. “I just wanted to run away from my husband. But I was thinking of my children. Finally I couldn’t endure the constant humiliation any more. So I decided to take my children and we left the house.”

Humo’s story is not uncommon in the Central European nation of Tajikistan. There is currently no law addressing violence against women or domestic violence in Tajikistan. Due in part to this lack of legal protection, many Tajik women do not have Humo’s courage and continue in abusive relationships.

However, a new bill passed by Tajikistan’s Lower House of the Parliament on 19 December, 2012 is bringing hope to such women with its provisions of protection for survivors. The draft law was passed after more than 10 years of struggle and advocacy work by civil society, NGOs, the women’s movement, the UN and other international organizations.

During this process, UN Women created a platform to establish partnerships between relevant State actors and women’s NGOs to strengthen lobbying for the adoption of the Domestic Violence law. This included building consensus through public hearings and meetings on the various versions of the bill. 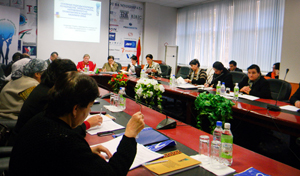 At a public hearing to lobby for adoption of the draft law on domestic violence conducted on 2 November 2012, the Coalition of NGOs “From Equality de jure to Equality de facto” took part, with the support of UN Women in Tajikistan. They participated alongside representatives from Government, law enforcement, international organizations and crisis centres. Photo credit/UN Women

“This law will help to regulate family relations and most importantly, it concretely defines the measures to prevent domestic violence,” says Nasrullo Makhmudov, a Member of Parliament who is one of the authors of the new bill. “It protects the rights of the family and defines the ways of providing legal, medical and psychological assistance to victims of domestic violence while introducing administrative measures for punishment of perpetrators.”

Under the approved bill, abused spouses will no longer be the only ones who can file legal complaints. Law enforcement officers will also be able to identify domestic violence cases based on accounts from eyewitnesses or other parties. Moreover, those who commit violence, or even threaten to do so after divorce, can be held accountable and punished.

In a critical new step, the proposed domestic violence law will also apply to families whose marriages are not officially registered. Currently, Article 1 of Tajikistan’s 1998 Family Code specifies that only marriages entered at the civil registry office are recognized by the State. Currently, an abused woman who has had a religious marriage but has no civil marriage certificate can be evicted from her home — and such cases account for a large number of those received by crisis centres and the Committee for Family and Women Affairs. [i]

For Humo, who was 38 when she divorced her husband and left with her three children, it was hard to find work with her secondary-level education. She was married as soon as she completed school and was then bound by housework and caring for her small children. But since her wedding was officially registered, she was at least partially protected by laws regulating divorce, although she had to get support to guarantee her rights.

“Without the support of my relatives — who helped me fight for my rights to get a plot of land and demand alimony to be paid by my husband — I would not have been able to cope with the problems,” she said.

The new bill will ensure entitlements such as property, alimony and inheritance to all women, regardless of how their marriages are registered. Speaking on behalf of the UN in Tajikistan, UN Resident Coordinator Alexander Zuev welcomed the Tajik Parliament’s decision to pass the law on domestic violence, as a key preventive tool. “This will allow coordination of the efforts of ministries, organizations, NGOs, international and human rights organizations and introduce a systematic approach to seeking solutions to the problem of domestic violence.”

The bill is expected to be approved by the Upper House and receive official ascent from the President in April. Today Humo has a house where she lives with her daughter while two of her sons are migrant workers in Russia. “I want girls and women to know their rights and raise their voice if they are violated in order to be protected,” says Humo. “I hope that the new law will guarantee protection for women and their rights and STOP men from treating their wives so badly. We are also human beings and deserve a better life.”

*The name of the woman in this story has been changed to protect her identity.

[i]According to the database of a Coalition of Crisis and Resource Centre NGOs, in 2010-2011, 9,870 people applied to 12 Crisis Centers (8,908 women and 962 men). Psychological abuse prevailed in the types of violence reported by women, followed by economic violence, physical violence and sexual violence. Moreover, almost one in four women cited multiple forms of violence.