Port Moresby's market vendors are, by and large, women – around 80 per cent. Many of them are extremely poor, depend on the selling of their vegetables for daily subsistence, and have experienced multiple forms of violence in public and private spaces, including sexual violence. Single mothers and widows face particular risks, as they are often stigmatized, and lack economic and social opportunities to reach their potential. 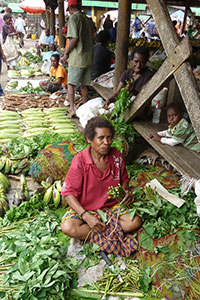 Shortly after the Port Moresby Safe City Programme* started in 2011, with the support of the Government of Spain, UN Women conducted a scoping study with local partners in the city to understand the nature and extent of violence against women and girls, including sexual harassment and other forms of sexual violence in six marketplaces. It found that 55 per cent of women experienced some form of sexual violence in market spaces in the previous year.

Too often women experienced sexual harassment and other forms of sexual violence and extortion on a regular basis. Too often women vendors were displaced from the market premises and forced to sit by busy roadside or open sewage or trash sites to sell their fruits and vegetables, increasing their risk of suffering violence. The study also indicated inadequate storage facilities and toilets, raising security and health concerns.

Two years later, a lot has changed in one of Port Moresby’s main markets, as a result of the strong participation of women vendors through vendors’ associations and innovative initiatives undertaken as part of a comprehensive approach to build safe markets with, and for, women and girls.

The Geheru market has upgraded its infrastructure, including bathrooms and showers, renovated market stalls and shaded areas and potable running water is now available. Moreover, new innovative cashless methods for collection of fees are being implemented to prevent extortion and theft, a market vendor association has been established, and a referral system for survivors of family and sexual violence in the markets is currently being piloted. 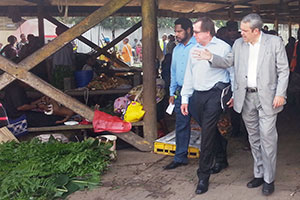 Building on these achievements, this week the New Zealand Government announced an additional contribution of up to USD 6.1 million (NZD 7 million) to Port Moresby’s Safe City Programme for a complete refurbishment of infrastructure at a second market site: Gordons Market, the city’s busiest, as well as the largest market in the Pacific. The funding will be made on a one-to-one basis in partnership with the National Capital District Commission (NCDC).

The announcement follows a recent workshop between all Safe City Programme partners and technical experts to provide recommendations for the redevelopment of Gordons market. Recommendations included an enlarged market site, new market buildings and a new drainage system to prevent flooding. To improve management, they suggested ongoing facilitation of vendors’ associations, development and resourcing of cyclical maintenance plans and establishing a mobile-phone-based vendor payment system.

“We have consulted women market vendors and other experts who have given us clear direction as to how to improve the market precinct, improve economic opportunities, improve sanitation, and above all, create a safe public market for everyone,” said UN Women Papua New Guinea Country Representative, Jeffrey Buchanan.

Welcoming the new contribution which will enable a complete refurbishment of the infrastructure at the capital’s busiest market, significantly strengthening the country’s fresh produce supply chain, Mr. Buchanan reiterated “Hard-working market vendors – over 80 per cent of which are women – deserve to have a modern, clean, safe and accessible place to earn a living.”

To provide opportunities for children of the market vendors, two libraries will also be opened in Gerehu and Gordon markets, in partnership with a local bank (Bank South Pacific), a children’s education initiative (Buk Bilong Pikinini), NCDC and UN Women. Many mothers need to take their children with  them to the market, not having the means to put them in school or to pay for child care. The libraries will provide a safe space and learning environment for the children while their mothers work or shop.

Related News
14/04/2015
Women vendors improve markets in Papua New Guinea
29/08/2014
Markets set to improve with Pacific women in the lead
24/12/2018
From where I stand: “We must believe in ourselves that we can be leaders”
07/11/2014
UN Women Executive Director to make first official trip to India
26/11/2012
Breaking the vicious circle of violence in local markets in Papua New Guinea
END_OF_DOCUMENT_TOKEN_TO_BE_REPLACED