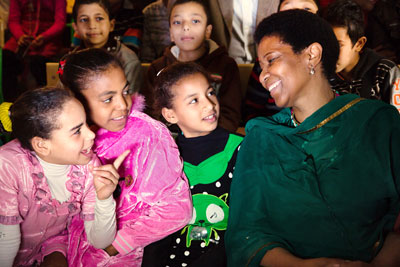 “I am precious, I am loved, my body is mine only, my body protects me” sang a group of young girls and boys trained by the SAFE programme on child abuse, which is a key component of the Cairo Safe City Programme. The visit to one of the flagship programmes in Egypt that is part of UN Women’s Global Safe Cities Initiative came as part of Ms. Mlambo-Ngcuka’s first official visit to Egypt as Head of UN Women. Interacting with the children afterwards, who called her “mama”, UN Women’s Executive Director said she was impressed by their performance, and urged them to keep up their efforts to prevent violence against women and girls.

Down narrow unpaved alleys on the outskirts of Cairo, there’s a beacon of hope for their community of Ezbet el-Haggana and for other marginalized districts. Volunteers, women, and community members increase knowledge, strengthen capacity to prevent sexual violence, gain access services and technical support to lead behavioural change, with support from CARE Egypt, the main facilitating NGO partner of the Cairo Safe City Programme.

By using music and games, these young girls and boys are learning to recognize abuse, and identify solutions in ending sexual harassment that is widespread in public spaces in their communities.

“If someone harassed me before, I would have never replied; I would be scared. But now, if I am harassed, I will turn and reply: ‘I now know my rights’,” said Ateyat. She is one of the women who receives legal support provided by the Ombudspersons Office of the National Council for Women, in close cooperation with the violence against women unit of the Ministry of the Interior. In addition to providing awareness-raising sessions for women on their rights, including their legal rights, there is a lawyer present on a regular basis who receives complaints and provides support.

The Executive Director also visited another component of the Cairo Safe City programme in Ezbet el-Haggana, where a community outreach initiative for drug addicts, led by the Freedom Programme at the Freedom from Drugs and HIV Centre, helps to spread the culture of prevention and support the rehabilitation of addicts. Awareness sessions are conducted on substance abuse, which is a key factor facilitating sexual violence against women and girls.

“Before recovering from drugs abuse, I was very violent with my family at home, especially my mother and sister. After receiving support, my perspective on many things has changed, I am now fully recovered, I have so much respect for women. I even started helping my mother and sister at home with house chores and my relationship with my sister has improved a lot. I am now also helping the programme, reaching out to more people,” said Ahmed, a recovering addict.

During the visit, Ms. Mlambo-Ngcuka watched a short interactive community theatre performance by young male and female Safe City volunteers. The skit focused on the different forms of violence women and girls experience on streets and in homes. This creative process allowed audience members to participate in the performance and come up with solutions to the problem.

The Executive Director’s visit also included a number of bilateral meetings with several public figures, governmental officials, and the Head of the National Women’s Machinery, civil society organizations, partners and religious leaders. She also visited staff at UN Women’s Regional Office for the Arab States and Country Office for Egypt.

The Executive Director’s field visit came on the heels of her participation in the Arab States high-level regional review meeting to assess progress on the landmark Beijing Platform for Action, 20 years on. During her time in Cairo, she stressed UN Women’s commitment to promote women’s leadership and political participation, economic empowerment especially in marginalized areas, national planning and budgeting, as well as the need to end violence against women.

Related News
02/12/2021
Under-Secretary-General of the United Nations and UN Women Executive Director completes her first official visit to Egypt
16/11/2020
Hand over the mic to: Aida Nour ElDin, Egypt
08/02/2018
“I learned to respect women”—Tuk Tuk drivers join efforts to make the streets of Cairo safe for women
05/02/2015
“We count on your leadership to tackle the barriers that remain for Arab women” says Executive Director at Beijing+20 regional review
11/08/2014
Games and children, a new direction to ending sexual violence
END_OF_DOCUMENT_TOKEN_TO_BE_REPLACED