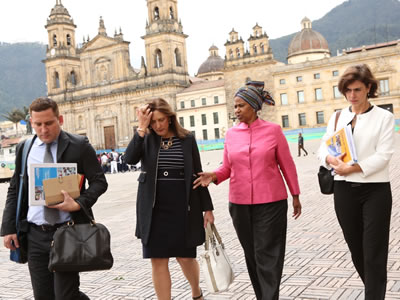 Walking through the centre of the capital, Bogotá, the Executive Director was joined by UN Women’s Regional Director, Luiza Carvalho (to the left) and UN Women’s Country Representative in Colombia, Belén Sanz (to the right) Photo: UN Women/Ryan Brown

During her first official visit to Colombia, from 8-9 May, UN Women Executive Director Phumzile Mlambo-Ngcuka, accompanied by Regional Director Luiza Carvalho and UN Women Representative in Colombia Belén Sanz, met representatives from civil society, government institutions, the business sector, and representatives of the international community. She also travelled to the Department of Antioquia (one of the country’s 32 administrative areas) to speak with representatives of women's organizations working for peace there and hear about the efforts of local institutions to promote women's rights and gender equality.

The visit allowed the Executive Director to learn first-hand about progress being made by women's organizations involved in peacebuilding, as well as their advocacy to ensure women’s voices are included in the ongoing peace process, and to reaffirm UN Women’s support for these efforts. Throughout her trip, the Executive Director sought to highlight the importance of the role of women in a possible post-conflict scenario, and the need to include women in political participation and development processes. 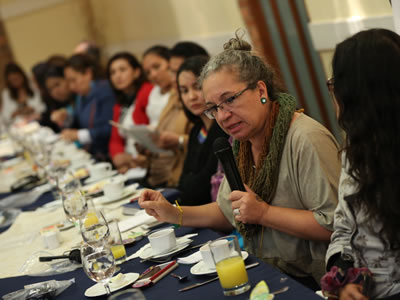 Rosa Emilia Salamanca, of the NGO CIASE, was among the women civil society representatives who met with the Executive Director on 8 May. Photo: UN Women/Ryan Brown

The visit began with an early morning breakfast with representatives of civil society organizations from different parts of the country. The organizations discussed their work with the Executive Director, emphasizing the efforts of Colombian women to influence peacebuilding and be involved in the peace process, at national and regional levels. The participants also shared their analyses of the impact of the conflict on their communities, and their concerns regarding how gender issues are addressed in the country’s institutions and development plan.

“At the negotiating table in Havana, we are stating that we women are political actors and active peace negotiators,” said Bibiana Peñaranda, a representative of the Mariposas de Alas Nuevas (Butterflies with New Wings) organization from Buenaventura, which defends the rights of women displaced by the armed conflict. 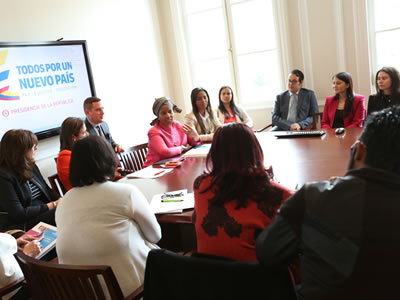 The Executive Director takes part in a meeting with the Minister of the Presidency, the Presidential Adviser for Gender Equality and other key institutional partners. Photo: UN Women/Ryan Brown

“What you have achieved is not a breakthrough for Colombian women alone: your contributions to peacebuilding are an inspiration to all women in conflict situations around the world,” said the Executive Director, adding that she was impressed by the level of organization and the great strides made by Colombian women. She also thanked them for the opportunity they had given UN Women to support their efforts. 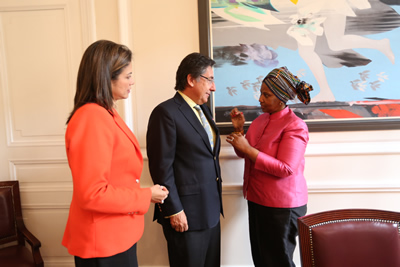 The Executive Director speaks with the Minister of the Presidency Néstor Humberto Martínez, and the Presidential Adviser on Equality for Women, Martha Ordóñez.

During her visit, Ms. Mlambo-Ngcuka met several members of the Colombian Government, such as the Minister of the Presidency, Néstor Humberto Martínez and the Presidential Adviser for Equality for Women, Martha Ordóñez. She held bilateral meetings with representatives of the Ministry of Foreign Affairs and the Ministry for Post-Conflict Issues. The Executive Director also met with various women senators, and representatives of Congress and of its Equality Commission.

At a working lunch with the private sector, convened with the Global Compact Network, the Executive Director met with major Colombian companies, including Telefónica Movistar, Caracol TV and the National Federation of Coffee Growers. The entrepreneurs discussed their programmes for women’s economic empowerment, as Ms. Mlambo-Ngcuka urged both the women and the men of the business sector to take decisive steps towards gender equality. “We need companies to commit themselves to breaking the glass ceiling that prevents women from participating in the labour market on equal terms,” said Ms. Mlambo-Ngcuka.

During the first day of the visit, the Executive Director met with members of the diplomatic corps in Colombia, Ambassadors – including from Norway, Sweden and the United Kingdom, representatives of international cooperation organizations, as well as donors and partners of UN Women programmes in Colombia. 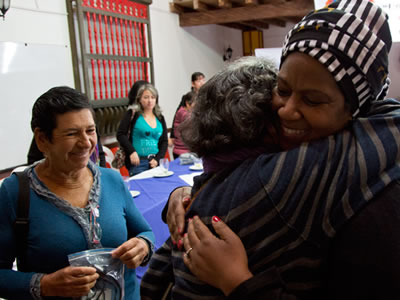 On the second day of her visit the Executive Director and the Regional Director and the Representative in Colombia went to the Department of Antioquia, where they visited Medellín, the second-largest city in Colombia, and the nearby town of Marinilla, where they met women survivors and peace leaders. The rural women shared issues with the Executive Director related to the reality they face in terms of access to land and land tenure, stressing the importance of economic empowerment for women's development. 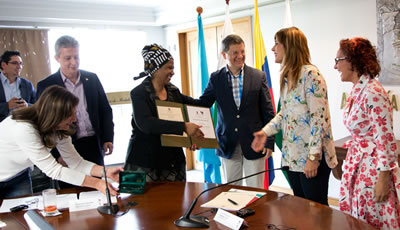 The Executive Director receives recognition as a distinguished guest of the city of Medellín. Photo: UN Women/Ryan Brown

In Medellín they were received by local officials, headed by the Acting Mayor, the Secretary for Gender Equality of the Department of Antioquia and the Secretary of Women of Medellín. The Executive Director was also presented with the keys to the city by Acting Mayor Luis Fernando Suárez.

Related News
12/05/2015
On first visit to Colombia, Executive Director meets women survivors and peacebuilders in Antioquia
17/12/2015
Joint Statement by Phumzile Mlambo-Ngcuka and Zainab Hawa Bangura on the signing on 15 December 2015 of the agreement on conflict victims between the Government of Colombia and FARC-EP
07/05/2015
UN Women Executive Director to visit Colombia
03/09/2014
Women as everyday peacebuilders critical to nation-building
21/10/2022
The reintegration of former guerrilla female fighters, a key piece in the implementation of the Peace Agreement in Colombia
END_OF_DOCUMENT_TOKEN_TO_BE_REPLACED