Op-ed: Now that would be a mother’s day really worth celebrating

Mother’s Day [was marked on 10 May] in more than 80 countries worldwide, from Anguilla to Zimbabwe. The origins of this day vary, but in the United States of America, it was established by Anna Jarvis in 1908, in honour of her mother, Ann Jarvis, a peace activist who cared for wounded soldiers on both sides of the Civil War and created Mother’s Day Work Clubs to address public health issues. Today, it is an occasion to recognize and celebrate the role of mothers in giving and sustaining each of our lives.

Beyond this one day, when mothers receive cards and flowers as tokens of appreciation from their families, this is also a moment to look at how societies and economies recognize and reward the work of mothers, and women more broadly.

As UN Women’s report, Progress of the World’s Women documents, women have become more visible in the paid economy in recent years in many countries. However, women’s other work – their unpaid work to produce and sustain families, which is no less valuable – is typically unrecognized and invisible. Globally women do two and a half times more unpaid care and domestic work as men. When paid and unpaid work is combined, in most countries, women work longer hours than men.

If women stopped doing unpaid care work, if they stopped having children, nurturing them, and rounding them into productive and creative human beings, there would be no labour force and the global economy would grind to a halt. If women and families stopped caring for older people, or those that need extra support, not only would our public services collapse under the strain, but our societies would be harsher and crueler places to live.

In the United States, unpaid childcare services (overwhelmingly provided by women) are valued at USD 3.2 trillion, which is equivalent to 20 per cent of the total value of GDP.

Given this staggering contribution to our economies and societies, one would think that women would be rewarded for their paid and unpaid work. The opposite is true. Globally, women are paid 24 per cent less than men. Women tend to be clustered into a narrow set of lowly occupations, jobs which are often under-valued precisely because they mirror the work that women do unpaid (cleaning, catering and caring, for example).

And when they become mothers, women are penalized yet further: in a range of countries, when it comes to pay, there is a ‘motherhood penalty’, which results in even wider gender inequalities. In the United States, for example, unmarried women earn 96 cents to an unmarried man’s dollar, but married women with at least one child earn 76 cents to the married father’s dollar. 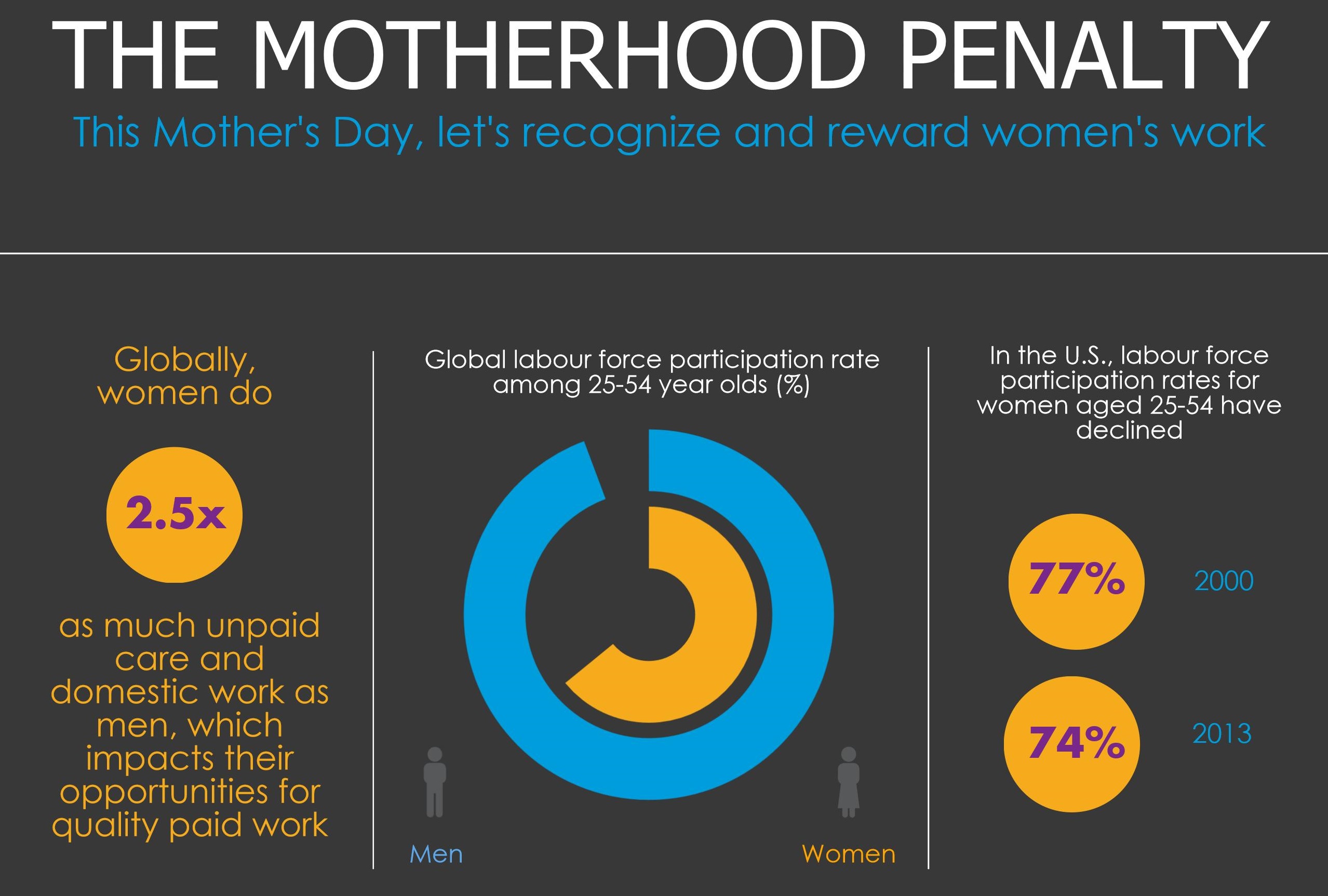 Click to see this interactive infographic on the "Motherhood penalty"

Women’s lower pay and lower employment rates translate into huge cumulative income gaps over their lifetimes. In Germany, for example, women can expect to earn 49 per cent less than men over their lifetimes. The ‘motherhood’ penalty has implications for women for the rest of their lives: lower pay and more years out of paid work to care for children, means lower pension contributions, and higher rates of poverty in older age. In the European Union, older women are 37 per cent more likely to live in poverty, than older men.

With women working longer hours and being paid less, it is any wonder that some are opting out of the labour market altogether? Latest figures for the United States show that labour force participation rates for women aged 25-54 – the time when they are most likely to have children – have declined from 77 per cent to 74 per cent since 2000. The U.S. is the only OECD country that does not provide paid maternity leave at the national level (some states make their own provisions). With prohibitively high childcare costs and little public support, trying to combine paid and unpaid work becomes impossible for many women, especially those on low incomes.

By contrast, women’s employment is increasing in countries that provide proper support for working families. The employment rates of mothers in EU countries that provide the most comprehensive support for families – paid parental leave, childcare services, flexible working policies – are 84 per cent, 21 percentage points higher than in those that provide the least support. The countries with the best policies also tend to include incentives for fathers to do their fair share of caring, challenging gender stereotypes that care work is a job for women only.

When the G20 met in Australia last year, they set a target to close the 25 percentage point gender gap in labour force participation by 2025 (25 by 25). Global leaders recognized that gaps in women’s employment are holding back economic growth and prosperity. These gaps also hold back women’s opportunities, well-being and economic independence.

Progress of the World’s Women shows that it is possible to close these gender gaps, in both rich and poor countries, with the right mix of economic and social policies. The evidence is abundant and the solutions are clear: stop penalizing women for having children, and start recognizing and supporting women’s unpaid care work.

Now that would be a Mother’s Day really worth celebrating.

Laura Turquet is the report manager for UN Women’s flagship publication Progress of the World’s Women. This op-ed has been published in several media outlets around the world.