Gender balance as a business imperative: A Q&A with Matt Winkler, Bloomberg News 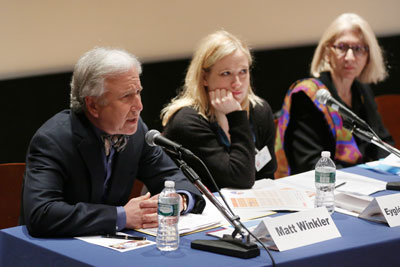 Matt Winkler was a panelist in a side-event during the 59th Commission on the Status of Women on 12 March, entitled “Advancing Critical Area of Concern J of the Beijing Declaration and Platform for Action”, co-hosted by UN Women and UNESCO. Photo: UN Women/Ryan Brown

As Editor-in-Chief of Bloomberg News, Matt Winkler oversaw a dedicated strategy to increase gender balance in both the newsroom itself and in the organization’s editorial coverage. They asked that a woman’s voice be included in every story, as a policy; allowed flexible work hours for parents; set specific targets every year for increasing women team leaders in the newsroom – doubling their numbers in just four years – and built a mentor system. It’s a strategy he says makes business sense, and has given them an advantage over competitors, including through big story ‘scoops’. Mr. Winkler recently accepted a new role as Editor-in-Chief Emeritus of Bloomberg, after almost 25 years as the Editor-in-Chief of Bloomberg News. In a wide-ranging interview, he reflects on how and why they pursued this transformative strategy, and its successes and challenges.

When did you come to see the need for greater gender balance in your newsroom?

For me, it was getting to the 20-year mark in Bloomberg News and realizing just how professionally inadequate our reporting was in its gender balance for attributive sources. The preponderance of people quoted in our stories was male and I was unsettled by this awareness.

The situation converged with discussions I was having simultaneously with my colleague Lisa Kassenaar and some other executives at Bloomberg News about gender imbalance in reporting and the relative paucity of women in senior positions at Bloomberg News. I saw the two situations as linked but they were not mutually exclusive. If we wanted to have more gender balance in our reporting, it would come more readily if the management was gender-balanced.

Thirdly, not only was the reporting in Bloomberg News sourced overwhelmingly to men, we weren’t reporting about women in all beats who were newsmakers and I thought it was a real deficiency in terms of news judgment.

You’ve talked about this strategy as a smart business model. Was the motivation more economic or ideological?

We addressed these three things with many initiatives, known as the women’s initiative, though I hesitated to define it that way because I did not want this mission to be marginalized.

We decided to present this issue as an economic, or business imperative. I wanted it to be considered as an imperative. The only thing I could think of was that we would be a better news organization if we did these things. We would be more competitive, break more news, have more exclusive reports and be in a position where we would influence other news organizations as we were growing. The biggest catalyst ––to answer those who questioned it–– would be if we achieved these goals simultaneously.

Has the women’s initiative worked?

Most of our headcount reports to a woman Laura Zelenko [Senior Executive Editor for Beat Reporting] who is in charge of most of our beats….She was really a pioneer at Bloomberg News...By the time she was appointed, she had literally been there, done that and she was equipped to deal with management, so she had got there on merit. She also got married and had children while she was at Bloomberg News, so she did all the things that men usually do on their way to the top and none of this interfered with her advancement. And the best is yet to come with Laura.

Similarly, other news executives who are women are in a whole variety of positions across the globe pretty much doing the same things [with female bureau chiefs in Frankfurt, London, Moscow, Paris, Sao Paulo and Toronto] … If you look back to 2007, nothing like this existed at Bloomberg News. There were a handful of exceptions then, but most of the management was men. The middle management is much more balanced now.

You’ve said that focusing on women newsmakers has helped Bloomberg News be more competitive. Can you give us a concrete example of how?

Covering the automobile industry coming out of the crisis of 2007/8, the big story was General Motors because it had gone through a major bankruptcy and restructuring and its complete leadership was overhauled. The event prompted us to turn our attention to the likely successor to GM’s Chief Executive. In our news judgement, the one who we thought had the most potential was Marry Barra and our reporter Tim Higgins in Detroit paid her close attention. We were the first to report that she would be the first female Chief Executive of GM and the first in the automobile industry.

We had the exclusive for a day and we had it so big that we were able to get her to pose for a picture for the cover of our magazine Bloomberg Businessweek. That’s pretty big. Bloomberg News was not even 25 years old and it was competing against the titans and we owned the story.

As a man, you oversaw this change but what were the key ingredients in this change?

Lisa Kassenaar is right at the top of the list. We could not have done this without Lisa’s infectious enthusiasm… She is an agent for all this. For me it has been a labour of love. There have been lots of people who have an important mandate.

The company is called Bloomberg and named after a guy called Bloomberg. Most of the people look and seem like him and, for men, there are role models who walk in and out every day. We wanted to, in as much as we could, find role models for the women so we found coaches… Their purpose is to promote confidence, provide inspiration, provide the best kind of counsel for idiosyncratic situations that we might not otherwise be equipped to handle, people with families, understanding what we want to do globally.

We have always been able to say with conviction and accuracy: it is not about where and when you work, it is about having the best stories. I could justify that to people in a big way. News does not happen on a nine-to-five timetable or Mondays to Fridays. To anyone who questions our news ethics, I would say news is 365 days a year and that makes it possible for families to meet their family and their professional commitments without any conflict. As we developed this, it was converging harmoniously with human resources and the trends they were following and it made it easier that we were in the news business.

What challenges did you face – or does Bloomberg still face – in implementing this strategy?

We are still struggling with a 50/50 per cent of people quoted in stories so that there is gender balance there. Still, there are more women than ever and we track that. It’s a problem faced by most news organizations. We have developed and continue to grow an internal women’s source list on the Bloomberg terminal.

What we write about is mainly financial and for overwhelmingly male customers who are overwhelmingly led by men, so we are consciously attacking the centre, where there is the biggest resistance. If we go to a beat like education it is easier, so general interest newspapers reporting on the education beat will have an easier time in terms of providing gender balance. We have a long way to go if we want to be 50/50.

Watch the webcast of a CSW59 side-event on Women and Media with Matt Winkler as a panelist (starting at 28:45 minutes):

Related News
12/02/2016
Radio airwaves amplify “On the Road” since Beijing
23/11/2015
Press release: Progress for women in news media grinds to a halt
01/05/2015
Reading between the lines: Moldovan journalists embrace balanced reporting
09/07/2021
I am Generation Equality: Mete Belovacıklı, advocate for gender equality in media
31/01/2017
From where I stand: “Today, I am living my dream, because I got a second chance”
END_OF_DOCUMENT_TOKEN_TO_BE_REPLACED