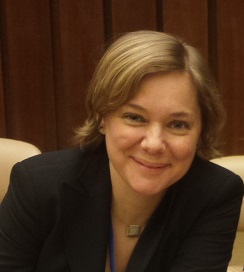 Silke Staab joined the UN Women Research and Data team as a Research Specialist in 2014, and is one of the authors of Progress of the World’s Women. Silke is a political scientist, and completed her PhD focusing on social policies and gender equality in Chile in 2013. She has worked as a researcher in both the UN Research Institute on Social Development (UNRISD) in Geneva and at the Economic Commission for Latin America (ECLAC) in Santiago.

After a lifetime of providing unpaid care for friends and family, older women often live in poverty with no one to care for them. Ageing is inevitable, but its gendered injustices are not. On this year’s International Day of Older Persons, it’s time to shine a spotlight on ending pensioner poverty, and providing decent elder care services for all.

Over the first half of the current century, the global population aged 60 years and over is projected to double, reaching 2 billion by 2050. This raises important questions. Can health and pension systems live up to the challenge of population ageing? Who will care for the growing number of frail elderly persons? These are hot political issues in many developed countries. But two thirds of the world’s elderly actually live in the developing world and by 2050, this share will have risen to nearly 80 per cent. The challenge of providing income security and care for all older persons is daunting where poverty is widespread, health systems already overburdened, and kinship, family and community support increasingly stretched.

Ageing has a female face, but policies have been slow to respond to the rights of older women. Not only do women live longer than men, making them over-represented among the elderly, but they also face greater economic hardship. Because of a lifetime of discrimination, women end up with fewer savings and assets that could help them maintain an adequate standard of living in old age. In addition, pension systems grossly fail to protect them from poverty.

Globally, only about half of people above the retirement age enjoy access to an old-age pension. In most countries, women are less likely than men to receive one and, where they do their benefit, levels are usually lower. In urban China, poverty rates among older women are three to four times higher than among older men; and in the European Union, older women are 37 per cent more likely than men to live in poverty [1].

But gender inequality in old age is as much about cash as it is about care. Prevailing gender norms and the fact that women tend to outlive the men they marry, mean that they provide the bulk of unpaid care for ageing spouses. They also play an important role in caring for grandchildren, enabling their parents to engage in paid work or taking their place as primary caregivers when children are orphaned by HIV/AIDS or left behind in the context of migration. While many older women take pride in this work, there is little social recognition and reward and the costs to their own physical and emotional well-being can be high.

It is ironic that women who often spend a lifetime caring for others end up poor, because of pension systems that fail to recognize this work, and have no one to rely on when they themselves become frail.

But old age does not have to be a double whammy for women. UN Women’s flagship report Progress of the World’s Women 2015-2016 shows that putting in place the right policies can make a big difference. Universal social pensions can be a powerful tool for providing basic income security and closing gender gaps in pension coverage: they establish the right to an old age pension for all elderly—women and men—independent of their employment histories and family status.

Providing these benefits is affordable even in low-income countries. Bolivia, Botswana and Mauritius have proven this point and studies estimate that in most sub-Saharan African countries such schemes would cost only around 1 per cent of GDP. The gains can be enormous and transcend generations. In South Africa, widely available social pensions have not only reduced poverty among older people, but also led to improvements in long-term nutrition and school attendance among the children they live with.

Affordable elderly care services are at least as important as pensions. Yet, such services are still rudimentary even in affluent countries, reflecting the fact that women’s unpaid elderly care work is still taken for granted. It is essential to assume collective responsibility for the care of our elderly by expanding public services and support mechanisms, to ensure the rights of both carers and cared-for, with options ranging from home-based care to more institutionally based daycare, residential and nursing homes.

Putting these measures in place will require political commitment as well as a significant investment of resources. But let’s be clear: relying on women’s unpaid care work while relegating them to poverty in old age cannot be the alternative.