(New York, 22 March)— At the United Nations Headquarters’ in New York, during a packed side event of the 60th session of the Commission on the Status of Women, UN Women today launched an innovative partnership with leading media houses to galvanize attention and concrete action towards the 2030 Agenda. The Step it Up for Gender Equality Media Compact brings together a broad coalition of media outlets from every region who work in print, broadcast and online news media to ensure wide reach and robust efforts towards women’s rights and gender equality. 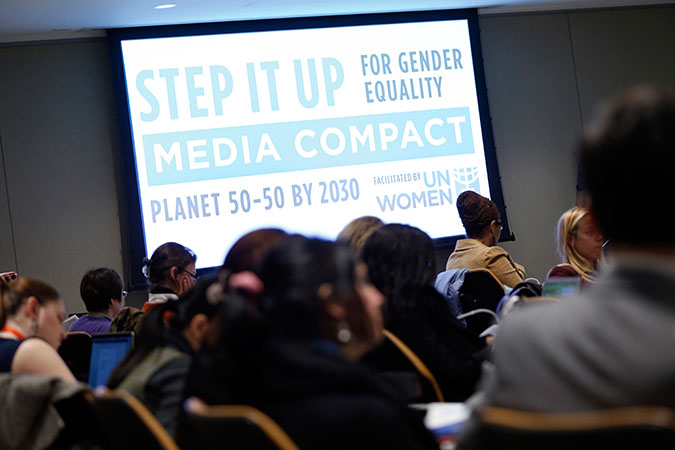 The launch of the Step it Up for Gender Equality Media Compact in New York on 22 March. Photo: UN Women/Ryan Brown

Recognizing the influential role media can play in driving women’s empowerment and gender equality, the Step it Up for Gender Equality Media Compact facilitated by UN Women will function as an alliance of media organizations who are committed to playing an active role in advancing gender issues within the framework of the Sustainable Development Goals. The outlets will implement the compact by scaling-up the focus on women’s rights and gender equality issues through high-quality coverage, complemented by gender-sensitive corporate practices. Leading up to the launch event, more than 35 leading media outlets signed up as founding members of the Media Compact. From grass-roots to national and international media players, the diverse group of initial members reach millions of readers and viewers in Africa, Arab States, Asia-Pacific, Europe and Latin American regions.

“Media have great influence over how we perceive and understand the world around us. That influence has many dimensions. Even when reporting is entirely factually accurate, if it is reported predominantly by men, about men, it is actually misrepresenting the real state of the world. At UN Women, we want to address this through partnership to change the media landscape and make media work for gender equality,” said UN Women Executive Director Phumzile Mlambo-Ngcuka. “This level of support and leadership from media houses and newsrooms alike is what is needed to ensure that we can achieve gender equality and women’s rights by 2030,” she added.

By signing up to the Media Compact, the outlets are committing to a range of concrete change actions: championing women’s rights and gender equality issues through editorial articles; ensuring inclusion of women as sources in stories produced, aiming for gender parity; adopting a gender-sensitive Code of Conduct on Reporting; ensuring women journalists are provided mentors and guidance for career advancement, and many others.

Speaking at the New York launch event, which was moderated by the Under-Secretary-General of the UN’s Department of Public Information, Cristina Gallach, media representatives from South African Broadcasting Corporation, Good Housekeeping and TV Azteca, all founding members, were unanimous in their support of the newly launched partnership, underlining that they will engage continuously through the Media Compact to push for gender equality in their news coverage and their newsrooms.

Watch the archived webcast at: https://www.unwomen.org/en/news/in-focus/csw/webcasts

Photos of the event are available at: https://www.unwomen.org/en/news/in-focus/csw/photos-and-videos