Valencia Club de Fútbol (Valencia CF) became the first sport club to become a UN Women global partner in May 2015, to advocate for gender equality and women’s empowerment. The Spanish soccer team players wear UN Women’s logo on their jerseys when they play in European competitions such as the prestigious Champions League, and host special matches and soccer clinics around the world to raise awareness. 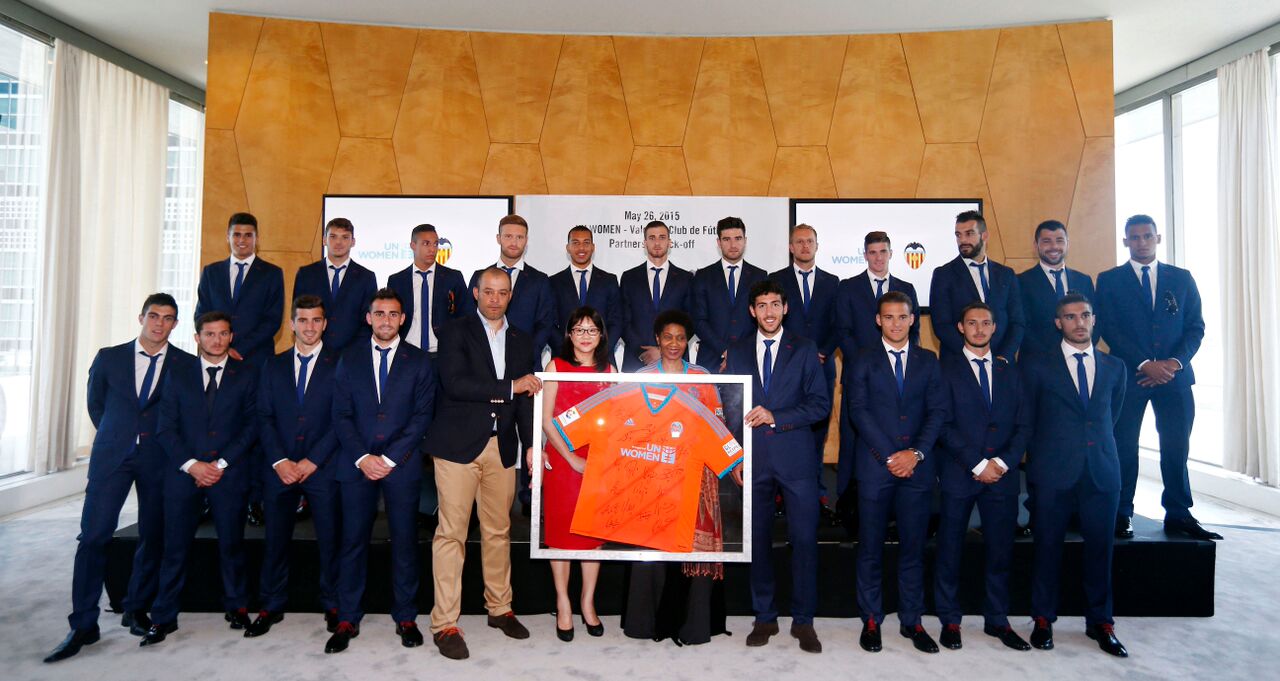 UN Women Executive Director Phumzile Mlambo-Ngcuka holds one of the new jerseys as she poses with players of the Valencia Club de Futbol soccer team at a press conference in New York on 26 May 2015. Photo: Valencia CF/Lázaro dela Peña.

“UN Women is dedicated to bringing more men and boys into the gender equality conversation,” says UN Women Executive Director Phumzile Mlambo-Ngcuka. “Valencia’s players are strong role models who will lead by example and inspire their vast fan base. We are excited to have Valencia show its support during every match played, with the cause prominently displayed to fans and viewers around the world.”

The entire first team, including superstars Dani Parejo, Shkodran Mustafi, Paco Alcacer and Alvaro Negredo travelled to New York in May 2015 to kick-off the partnership.

BBVA), gender equality is not only a woman’s issue; it’s a human rights issue that the club strongly believes in. “We are honoured to work alongside UN Women and the global community to support and bring awareness to such a remarkable cause,” she says. “This is a long-term commitment to really help make a difference to expand advocacy efforts towards gender equality.”

Creating new norms of gender equality from an early age among boys and girls is key to ending discrimination and inequality in our societies. In July 2015, Valencia CF players took the message of gender equality to girls and boys of Beijing Royal School, in Beijing, China, where UN Women was implementing a peer education and leadership programme. The students had the opportunity to train with Valencia CF’s professional athletes and the players encouraged young women’s empowerment through sport.

“We know millions of fans follow the Valencia CF and we are confident that this partnership will help us to mobilize numerous supporters for gender equality not only in China but also around the world,” says Roberta Clarke, UN Women Regional Director for Asia and the Pacific. 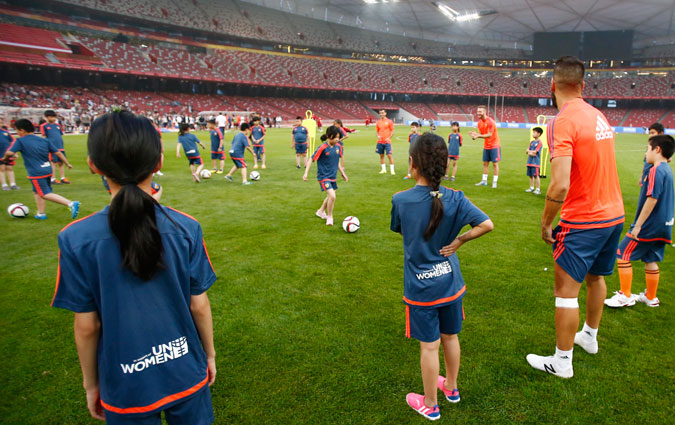 Many humanitarian and development workers already include sport programming in their activities but may not have the necessary skills to conduct high-quality training programmes. To address this gap, Valencia CF and UN Women piloted a workshop at the Valencia CF Academy in April 2016. The workshop brought together experienced gender advocates and skilled athletes who work with sport associations to learn techniques to design and conduct high-quality soccer training programmes with a strong focus on gender equality, prevention of violence against women and girls and building self-esteem and leadership through sport.

Workshop participants have committed to share their new skills and knowledge with peers in the countries where they work by designing and implementing projects based on what they’ve learned.

With additional workshops over the next three years, the project aims to reach at least 30,000 girls and boys by the end of 2019.

“We had great conversations on issues relating to gender influence on our societies and interactions between people. In one exercise, people played different characters and took steps forward or backward depending on the perceived privilege of their characters—for example a male member of parliament, or a female domestic worker. It was a way to visualize how gender, class and social dynamics all play part in shaping people’s place in their communities,” says UN Women Programme Analyst Jakob Silas Lund, who facilitated the workshop. “There’s huge potential for sport to be a lever of social change and women’s empowerment, and we want to be at the forefront of bringing those worlds together.” 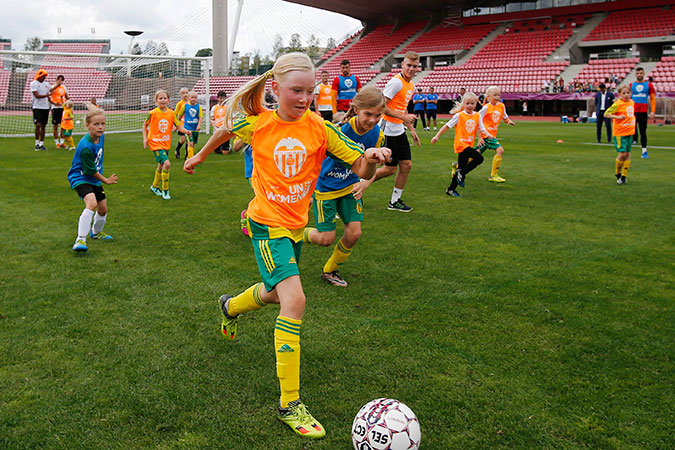 Most recently, on 31 July, Valencia CF, in partnership with UN Women, organized a football clinic for 20 girls, aged 7-9 years, from the FC Ilves Academy at the Ratina Stadium in Finland. The players delivered football training and passed on messages of gender equality and women's empowerment to the enthusiastic young participants.