UNITE campaign’s theme “Leave No One Behind” emphasizes the urgency of reaching the most marginalized first, as the 16 Days of Activism begins worldwide 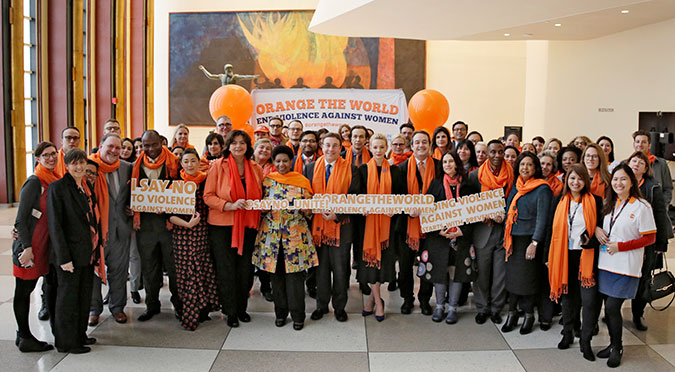 Participants in the official commemoration of the International Day for the Elimination of Violence against Women in New York. Photo: UN Women/Ryan Brown

(New York, 21 November)—Starting on the International Day for the Elimination of Violence Against Women (25 November), hundreds of events worldwide, led by UN Women and partners, will bolster efforts to end a pandemic that impacts one in three women globally. From marches, flashmobs and concerts, to football and rugby games events will be organized, and iconic buildings lit up in orange to galvanize attention during the 16 Days of Activism Against Gender-Based Violence (25 November – 10 December).

This year’s commemoration comes at a unique moment, coinciding with the unprecedented mobilization of millions behind #MeToo and other movements in an escalating global protest against sexual harassment and assault. As the annual campaign kicks off, UN Women calls for seizing the opportunity created by the global outcry over sexual harassment and moving it towards solution-based implementation of laws and policies to end violence against women once and for all. 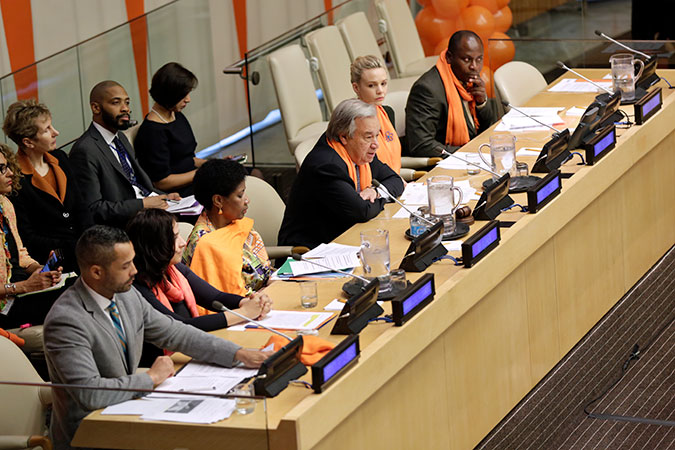 United Nations Secretary-General António Guterres speaks at the official commemoration of the International Day for the Elimination of Violence against Women in New York. Photo: UN Women/Ryan Brown

The 16 Days campaign, which mobilizes governments and public alike, is commemorated by the UN under the umbrella of the Secretary-General’s campaign UNiTE to End Violence against Women by 2030. Orange has been designated as the colour of the UNiTE campaign as it symbolizes hope and a violence-free world. The call is for everyone to “Orange the World” and play their part to end violence against women and girls, taking the outcry to action. In 2016, people in a record 105 countries participated.

This year’s theme for the campaign is “Leave No One Behind: End Violence against Women and Girls”, in line with the 2030 Agenda for Sustainable Development. It underscores that while no group of women or girls is exempt, the risks and vulnerabilities for some are greater. Identifying the most marginalized women and girls is fundamental to being able to effectively respond and reach them.

For instance, migrants, refugees and internally displaced people are at greater risk of sexual violence and may lack formal recognition by the State, which prevents them from accessing health, police, justice or social services. Indigenous women and those from ethnic or racial minorities often face the highest levels of discrimination across social, political and economic dimensions. Women living with disabilities and those living in rural areas face physical and/or communication barriers. 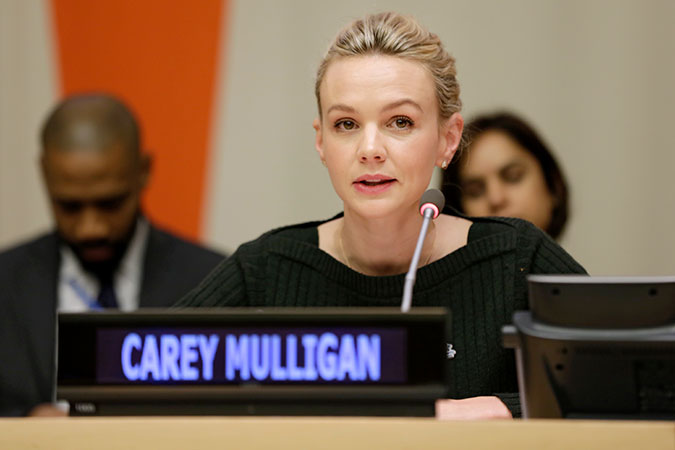 Actor and UK Global Dementia Friends and Alzheimer’s Society Ambassador, Carey Mulligan participates in the official commemoration of the International Day for the Elimination of Violence against Women in New York. Photo: UN Women/Ryan Brown

“Everyone has the right to live their life without violence or the threat of violence. This holds for all people, no matter what their gender, age, race, religion, ethnicity or caste, and irrespective of their income level, sexual orientation, HIV status, citizenship, where they live, or any other characteristic of their identity,” said UN Women Executive Director, Phumzile Mlambo-Ngcuka. “At the heart of today’s theme of ‘leaving no one behind’, is leaving no one out. This means bringing women and girls as equals into everything that concerns them,” she added.

Violence not only has negative consequences for those who suffer it, but also their families, the community and society at large, and it comes at a high economic cost for society. But it is not inevitable—violence against women and girls can be ended with a comprehensive approach that includes the passing and implementation of laws to protect women and girls and boosting efforts to prosecute offenders; prevention that starts at an early age to instill a culture of zero tolerance toward violence; and comprehensive services accessible to all survivors, including medical and psychological support, housing, legal advice, etc. The multilateral UN Trust Fund to End Violence against Women, managed by UN Women, has for 20 years awarded grants to over 460 organizations with results that show that violence against women and girls can be systematically addressed.

As part of global efforts to end all forms of violence against women and girls, the European Union and the United Nations launched earlier this year the Spotlight Initiative, with an initial investment of EUR 500 million by the EU. The Initiative will respond to all forms of violence, with a particular focus on domestic and family violence, sexual and gender-based violence and harmful practices, femicide, human trafficking and sexual and economic (labour) exploitation. 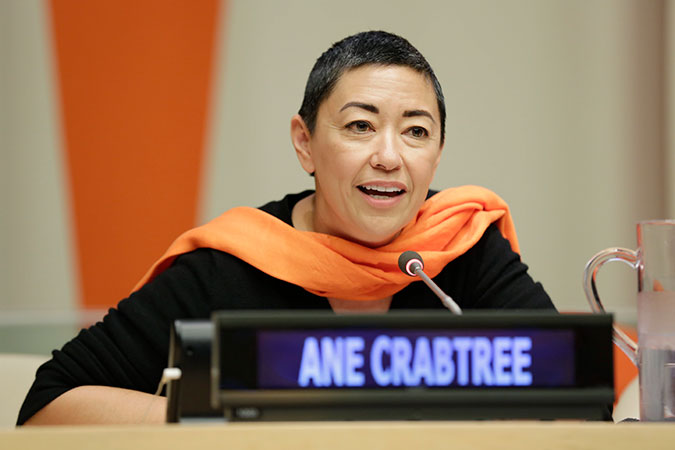 Costume designer of the Emmy-award winning series“The Handmaid’s Tale”, Ane Crabtree speaks at the official commemoration of the International Day for the Elimination of Violence against Women in New York. Photo: UN Women/Ryan Brown

At UN Headquarters in New York, an event with UN Secretary-General Antonio Guterres, and including Carey Mulligan, UK Global Dementia Friends and Alzheimer’s Society Ambassador and Oscar-nominated actor, and Phumzile Mlambo-Ngcuka, UN Women Executive Director, among others, will take place on 22 November to shine a light on the need to end violence against women. The event will also feature segments of the Emmy-award winning series, “The Handmaid’s Tale”, followed by a panel discussion with members of the cast and crew, including the producer, Bruce Miller and costume designer Ane Crabtree, as well as musical performances. Civil Society will be represented by two UN Trust Fund programme participants, Dragana Ciric Milovanovic and Morgen Chinoona.

As in previous years, iconic buildings and monuments will be ‘oranged’ to call for a violence-free future, including the parliaments in Bangladesh, Liberia, and Morocco, the Palace of Fine Arts in Mexico City, Mexico, La Scala theatre in Milan, the City Hall in Bogota, the National Theatre of Algiers, and Table Mountain in Cape Town, South Africa.

Staff at the Cape Verde TACV and Binter Airlines will be wearing orange pins; metro cars in Santiago de Chile and buses in Da Nang (Vietnam) will be painted orange, and the Morocco national football championship games will also be decorated orange. Other events foreseen during the 16 Days include a ballet performance in Kosovo, a 5 km run in Ecuador, the unveiling of mural paintings in Guatemala, public lectures at universities of Kyrgyzstan, a cricket tournament in Indonesia, the launch of the Uganda Police Force Gender Policy.

On 25 November, the UN Trust Fund to End Violence against Women will host a fundraising gala event in London, United Kingdom. The event will celebrate the life-changing results and achievements of a wide range of UN Trust Fund-supported interventions that work to end the pandemic of violence against women globally. Hosted by UN Women Executive Director Phumzile Mlambo-Ngcuka, the evening will bring together notable speakers including H.R.H. Princess Eugenie of York, Frances Corner, Head of London College of Fashion and Pro Vice-Chancellor Digital of University of the Arts London, women’s rights activists, UN officials and the private sector, highlighting the successes of beneficiaries and their life-changing work across the world. Emcee Zeinab Badawi, the International Broadcaster, will interview two UN Trust Fund grantee representatives live at the event—Marija Andjelkovic from ASTRA in Serbia on ending trafficking in human beings in the Balkan region, and Chinyere Eyoh, from SOAR in Nigeria working on protecting girls from sexual violence. Actors Gabriella Wright and Joanne Froggatt will narrate two inspirational stories of beneficiaries, one from Nepal and one from the Gambia.

Throughout the 16 Days, the UNiTE Campaign’s Spotlight Days will focus on the far-reaching consequences of violence within some of the most marginalized and underserved groups of women and girls. For instance, 27 November will spotlight violence against Indigenous Women and Girls, and 29 November will Spotlight on Women Human Rights Defenders.

Orange your profile picture to show your support and spread the word on all social media platforms using the hashtags #orangetheworld and #16days.Orange graphics, infographics and sample messages are available here.