In the words of Taffan Ako: “I believe you have to be in the system in order to change the system” 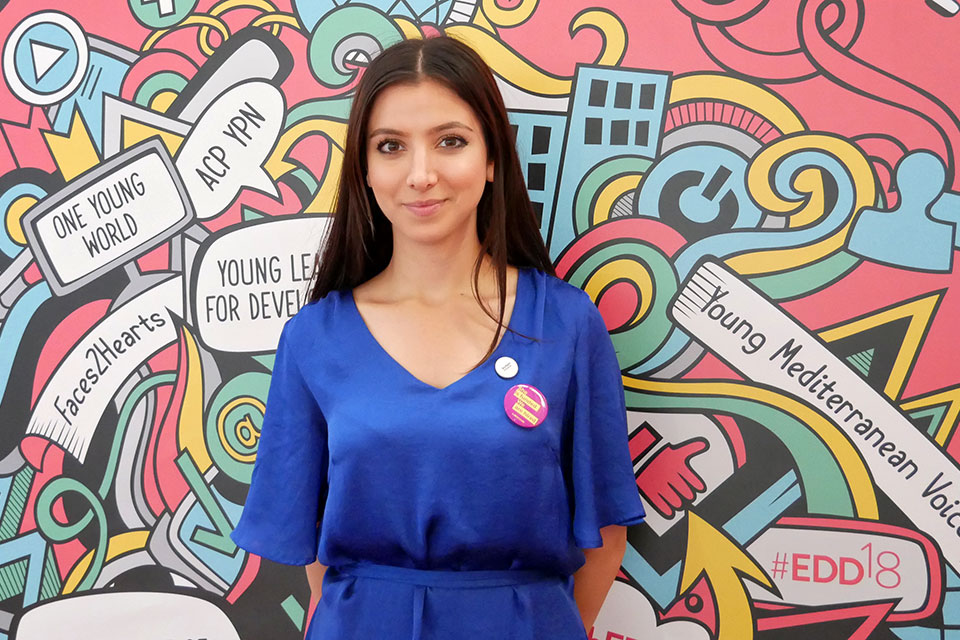 A refugee from Iraqi Kurdistan, Taffan Ako fled to Sweden in 1997 with her family. Today she is the Coordinator of One Young World Ambassadors for Scandinavia and Eastern Europe and founder of EmpowHERment, an organization that assists women and young girls who have been former ISIS sex slaves or victims of human trafficking. Her foundation finances integration projects for children and women in Europe and in Iraqi Kurdistan. Ako was one of the Young Leaders attending the EU Development Days in June 2018 and spoke to UN Women about her experience growing up as a refugee in Sweden and her activism today.

We fled the civil war in Iraqi Kurdistan with my mother and my sister when I was three years old. We came the same way as people do today, hiding in trucks, in small rubber boats, carrying everything we owned.

Eventually, we made it to Sweden. My father followed us into Sweden after a few months, he had been wounded in the war.

I learned Swedish before I learned Kurdish. I grew up with democratic values and knew my rights. But at school, the kids bullied me. They said, you’re a refugee, you’re stateless. They said, I had to say I was from Iraq, not Kurdistan.

I had a lot of identity crisis growing up and that contributed toward my decision to go back to Kurdistan when I was 18 years old. I thought I needed to go back where I belonged, where I would feel accepted.

Having spent my entire childhood in Sweden, I had [a different] vision of humanity, human rights and democracy. But in Kurdistan I couldn’t even go swimming wearing a normal bathing suit; my grandfather would ask me to wear long sleeves. I became curious about why women had a different role in the [Kurd] society. That curiosity was the foundation for my passion for feminism and women’s rights.

When I moved back to Kurdistan, I realized women could only be teachers or housewives; and even if you were a teacher, you couldn’t teach high school students because they were in puberty and that might lead to sexual behaviours. One night, I sat down with my father’s uncle, the oldest man in our family and the most educated. I asked him why women were so oppressed. He said it was because of the culture and people have not been taught to break free from that, because the honour culture is so strong. The men connect everything they have to their women’s honour. A [woman’s] honour reflects on her entire family, and yet, she is not worth anything.

I wrote my first article that night, “Feminism in Kurdistan”, which got published in an online magazine called Kurdistan Tribune. Some local magazines then translated it into Kurdish and publish it. Within 48 hours, I received so much hate from my own community in Kurdistan, from men and from religious groups, that I was scared I didn’t know how to handle the cyber violence. Even my uncles were outraged and said I had dishonoured them.

But then, my father called me and said, “I am so proud of you. I do not want you to stop”.

After a few weeks, I continued writing and started engaging with local organizations. I launched different projects on preventing Female Genital Mutilations in the rural areas in Kurdistan and got a lot of support from the youth community. It was nice to know that even if the older generation or the religious groups would not agree with me, there were others who would. I launched the first youth empowerment association in Kurdistan.

I stayed in Kurdistan for three years, and I developed this work because of the refugee crisis that hit the Middle East before it hit Europe. I believe you have to be in the system in order to change the system.

In 2016 I moved back to Sweden and have been studying there since. If I am allowed to dream really big, I would love to be the Swedish Foreign Affairs Minister one day.”

Related News
07/10/2021
From where I stand: “I want to leave a significant imprint in the society”
12/07/2019
From where I stand: “Equality between men and women…is a moral imperative”
20/09/2017
Humanitarian actors highlight women’s role in recovery and peacebuilding in Iraq
25/07/2016
Football camps in Jordan plant seeds of friendship and cohesion
09/03/2012
Remarks by UN Women Executive Director Michelle Bachelet at Informal Discussion With Girl High School Students, Al-Ghafari High School, Morocco
END_OF_DOCUMENT_TOKEN_TO_BE_REPLACED