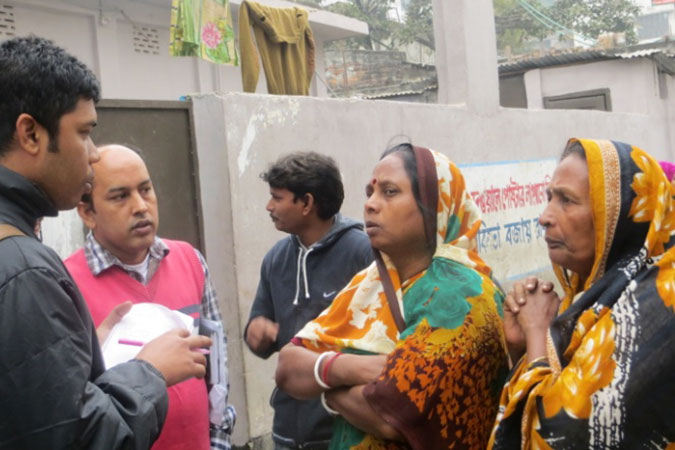 Moni Rani Das speaking to a Journalist about the situation of her colony situated at Ganaktuli, Dhaka. Photo: Nagorik Udyog

Moni Rani Das, born and raised in a “cleaners’ colony”—poor and segregated settlements where street cleaners and domestic workers live—in Dhaka, Bangladesh, never imagined that she would be advocating for her rights and those of nearly 3 million Dalit [1] women of her country. Today, she is the first Dalit person to be part of the National Human Rights Commission of Bangladesh.

“As a Dalit Woman, opportunities always eluded me and I had very low self-confidence,” said Das.

Dalits are at the very bottom of the archaic caste system that lives on in South Asia. The caste system refers to a social stratification, whereby individuals face multiple generations of discrimination and segregation based on their descent. Social mobility is often impossible when children born into a certain caste are systematically denied opportunities, starting from food, education and health to jobs and civic rights.

As a woman, Das faced even more discrimination. Married by the age of 15, she didn’t get a chance to complete her education. However, her strong will and sense of injustice compelled her to join the Bangladesh Dalit and Excluded Rights Movement, and for the past 15 years she has been mobilizing local women to be part of the Dalit movement.

“Seeing the Dalit women’s plight, I felt that it was my duty to fight for their rights. Hopefully this will lead to better conditions for the future generation,” says Moni Das.

Across the South Asia region, there are some 120 million Dalit women, facing a lifetime of discrimination, violence and poverty. A 2016 study, led by Asia Dalit Rights Forum and supported by UN Women, highlights that Dalit women labourers earn far less than the minimum wage; Dalit girls are more likely to drop out of secondary school than girls from upper castes; and less than one per cent of Dalit women own any land or property. They also experience high levels of gender-based violence.

“Crimes against Dalit women manifest in the form of extreme physical and sexual violence. When violence is perpetrated against a Dalit woman, there is an idea [that] she is a Dalit woman, therefore anything that is done to her is okay,” elaborated Zakir Hossain, from the Nagorik Uddyog, a local organization working with Dalit women in Bangladesh.

With the support of UN Women’s Fund for Gender Equality (FGE), the Feminist Dalit Organization (FEDO) based in Nepal, is striving to address the challenges that Dalit women face in South Asia, in partnership with local organizations such as Nagorik Uddyog in Bangladesh, Swadhikar and Asia Dalit Rights Forum in India, and the Human Development Organization (HDO) in Sri Lanka.

Unlike India or Nepal, Bangladesh has no official recognition of caste discrimination, hence there are no targeted national schemes or policies to eliminate the practice. To address this issue, Nagorik Uddyog organized capacity building workshops for Dalit women where 50 activists learned to develop policies and advocate for budgets that could improve their economic and political situation. Moni Das was one of the workshop participants. 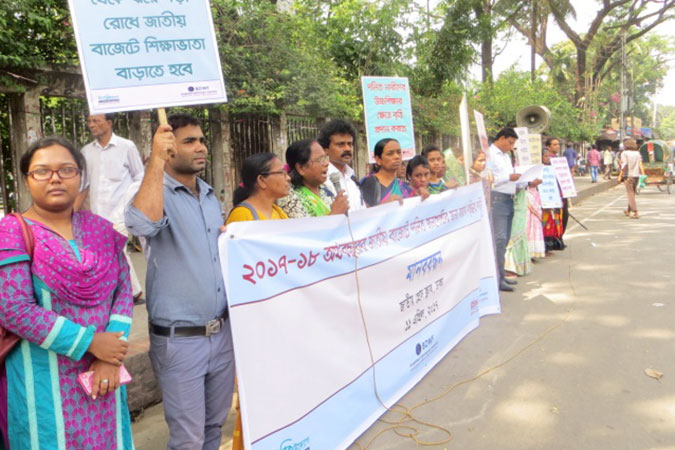 “I have gained knowledge on the aspects of budgets and how this is critical to tackling poverty within the community,” she shared. “I feel empowered to sit at the same table as policy makers and negotiate for rights of Dalit women.”

In addition to empowering Dalit women to analyze public spending, FEDO has also developed research on why Dalit women do not access government schemes and budgets allocated to them, even when they exist. Based on the study, they have shared policy recommendations with members of the government in Bangladesh, India, Nepal and Sri Lanka.

“FEDO’s focus on Dalit women’s economic rights, especially their access to land, is extremely relevant, as not only does it allow them to overcome poverty, increase economic resources and access higher education, but it also constitutes a protective factor against gender-based violence,” explains Caroline Horekens, Fund for Gender Equality Specialist for Asia and the Pacific.

The FEDO programme supported by the Fund for Gender Equality recently concluded in May 2018 and has directly impacted the lives of over 1,900 women across South Asia to date. For Moni Das, this is only the beginning. She is determined to make sure that the millions of Dalit women in Bangladesh are not left behind as the rest of the world strives to achieve sustainable development.

[1] Literally meaning oppressed and broken, Dalit is the lowest caste group in some South Asian countries

Related News
10/06/2016
From child labourer to women’s rights defender
12/07/2018
Take Five: "We are seeking nothing more than our due share of services and opportunities"
18/07/2017
In Benin, small savings and loans groups drive rural women’s empowerment
24/08/2016
Migrant women of Viet Nam claim social protection and rights
21/06/2016
From where I stand: Khateeja Mallah
END_OF_DOCUMENT_TOKEN_TO_BE_REPLACED