Devoted to discovery: seven women scientists who have shaped our world 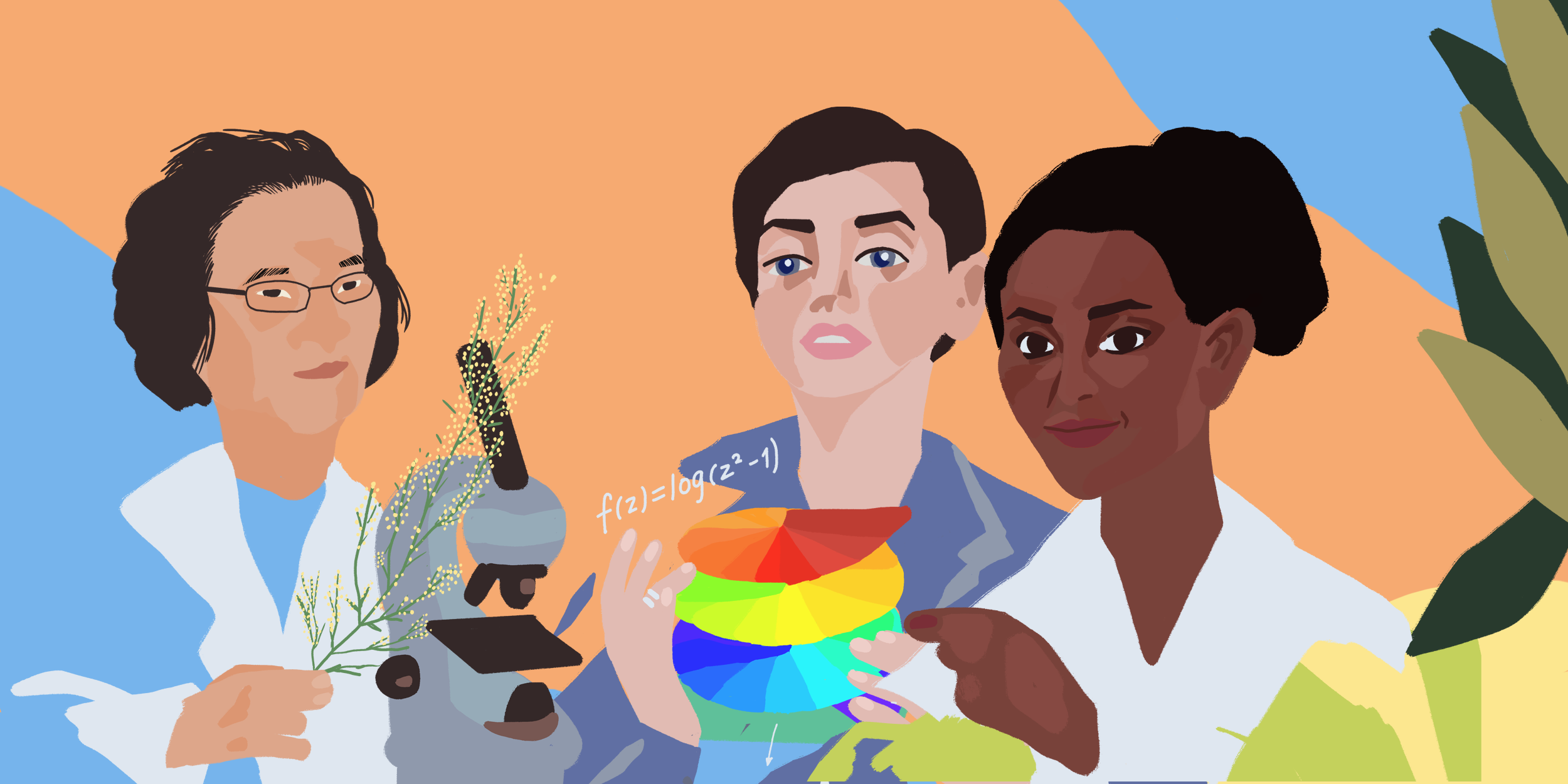 For centuries, women have made significant contributions to the field of science. They’ve discovered life-saving remedies, devised world-altering inventions, and produced far-reaching research, but in many cases their invaluable advances are minimized or neglected.

For too long, the STEM fields have been shaped by gender biases that exclude women and girls, past, present, and future. Unequal access to education, technologies, and leadership positions have steered countless bright female minds away from STEM careers and stalled their progress.

Despite the setbacks,creative and tenacious women and girls are pushing the boundaries of scientific knowledge and seeking solutions to complex global challenges every day. Their work has changed the way we see our world, and their stories deserve to be told, and retold.

The scientific breakthroughs we get reflect those who make them. The gender gap in science, technology and innovation translates to missed talent, untapped discoveries and biased solutions.

On International Day of Women and Girls in STEM, here are just seven women scientists you need to know and celebrate.

Tu Youyou is a pharmaceutical chemist whose visionary research on malaria treatment is rooted in ancient Chinese medicine. Her discovery of artemisinin, a compound that quickly reduces the number of plasmodium parasites in the blood of patients with malaria, has saved millions of lives.

As a pharmacology student, Youyou learned to classify medicinal plants, extract active ingredients, and determine their chemical structures. Early in her career she spent years in the rainforests of South China, studying the devastating consequences of malaria and ancient medical texts about traditional Chinese treatments for the disease.

After years of research, Youyou and her team finally found a reference to sweet wormwood, which had been used in China around 400 AD to treat intermittent fevers, a symptom of malaria. They extracted the active compound artemisinin, tested it, and published their findings. Today the World Health Organization recommends artemisinin combination therapy as the first line of defense against malaria.

‘“Every scientist dreams of doing something that can help the world,” says Youyou.

Youyou’s discovery continues to save lives every day. Click here to learn more about her extraordinary work.

“Ever since I was young, I was interested in asking questions about how the world worked,” says 19 year-old Kiara Nirghin, winner of 2016 Google Science Fair for creating a super absorbent polymer that can retain over 100 times its mass—potentially revolutionizing water conservation and sustaining crops through periods of drought. Best yet: it’s low-cost and biodegradable, made of orange peels and avocado skins.

Nirghin’s interest in water conservation stems from her experience of the 2015 drought in her home country of South Africa. She was struck to see water dams, once full to the brim, run dry, and she felt frustrated by the lack of solutions to the problem. “I always knew that I had to do something to solve the drought because nobody else was doing anything,” she said at the United Nations Observance of International Women’s Day 2019.

Nirghin’s discovery has the potential to reach far beyond her hometown; applied to agricultural fields, her super absorbent polymer could increase food security around the globe.

Nirghin continues her research and studies at the University of Stanford and advocates for young girls to pursue their STEM interests: “Getting girls involved in science should be on everyone’s agenda. I think that every idea fundamentally has the power to change our world."

Lending her voice to UN Women’s I am Generation Equality campaign, Nirghin said: “We can encourage more women and girls to pursue STEM careers by showcasing more positive role models and other women’s success stories. Role models are so important because they are proof to young girls and aspiring scientists that they too can achieve their dreams.” Read her full interview>

Learn more about Nirghin’s discovery and experience as a girl in STEM in an Instagram live interview alongside 2015 Google Science Fair winner Olivia Anne Hallisey.

Katherine Johnson is a mathematician whose calculations have been essential to U.S. space exploration. As a NASA scientist, Johnson calculated trajectories, launch windows, and emergency return paths that flew the first U.S. astronauts into space and Earth’s orbit.

“I found myself very inquisitive. I wanted to know what was going on and why. It was important to me to learn why,” Johnson says of her drive to push the boundaries of possibility.

She was the first African-American woman to attend her graduate school and was one of few African-American women to work on the NASA space program. She faced discrimination because of her race and gender, but she knew she belonged on the team. “They got used to me asking questions and being the only woman there,” she shares.

She encourages those inspired by her pioneering career to pursue their own interests: “Find out what your dream is, and then work at it. Because if you like what you’re doing you will do well.”

Marie Curie was a physicist and chemist whose radioactivity research laid the foundation for modern nuclear science, from X-rays to radiotherapy for treating cancer. She was the first woman to win the Nobel Prize, and the first person to win two Nobel Prizes in different sciences.

Curie attended university in her native Poland and received her Doctorate degree from the University of Paris. She and her husband Pierre discovered two radioactive elements, polonium and radium, she founded a medical research institute in Warsaw, and she invented mobile X-ray units that helped more than one million wounded soldiers in World War I.

Curie was unaware of the risks her research posed. She eventually died of a radiation-related illness, but her discoveries continue to save lives today.

Encouraging us all to pursue our passions with curiosity and courage, Curie said, “Nothing in life is to be feared, it is only to be understood. Now is the time to understand more, so that we may fear less.” Her legacy continues to inspire women and girls in STEM today.

Marcia Barbosa is a Brazilian physicist known for her research on the complex structures of the water molecule. “Water is weird,” says Barbosa, who thinks the anomalies of the molecule could help address freshwater shortage problems.

Barbosa has developed a series of models of water’s properties that may improve our understanding on a wide variety of topics, such as: how earthquakes occur, proteins fold, cleaner energy is generated, and diseases are treated. In 2013, she was awarded the L'Oréal-UNESCO Awards for Women in Science.

In addition to her remarkable research, Barbosa is committed to leveling the playing field for women and girls in STEM. She has organized a number of conferences on women in physics, authored papers on geographic and gender diversity inscience, and taught seminars that examined the lack of women in the field.

Be inspired by Barbosa’s activism and share you support for women and girls’ equal access to education and opportunity by using #WomenInScience.

Segenet Kelemu is a molecular plant pathologist whose cutting-edge research is dedicated to helping the world’s smallholder farmers grow more food and rise out of poverty.

“The drive of my life is to make a difference in people’s lives and to improve agriculture in Africa,” she shares.

Kelemu grew up in a poor farming family in Ethiopia and was the first woman from her region to get a college degree. “In my village, girls were married off at a very young age, but luckily I was too rebellious for anyone to arrange a marriage for me,” she laughs. “I was really determined to go to university.”

Kelemu was awarded a L'Oréal-UNESCO Award for Women in Science in 2014, named one of the 100 most influential African women by Forbes Africa, and elected as a Fellow of The World Academy of Sciences in 2015.

A woman of many firsts and a hero in her field, Kelemu inspires us to work with purpose and dedication for the causes we care about.

As a girl growing up in Tehran, Iran, Maryam Mirzakhani dreamed of becoming a writer. It wasn’t until her high school years that she discovered her talent for mathematics—the subject that captured her creativity and intellect for the rest of her life.

In 1994, Mirzakhani became the first female Iranian student to win the gold medal in the International Mathematical Olympiad, scoring 41 out of 42 points, and in 2015 she returned to win with a perfect score.

She earned her PhD from Harvard University and was a leading scholar on the dynamics and geometry of complex surfaces. In 2014, she became the first female winner of the Fields Medal, the most prestigious award in mathematics.

“The more I spent time on mathematics, the more excited I became,” Mirzakhani said of her research. She recalls loving “the excitement of discovery and enjoyment of understanding something new, the feeling of being on top of a hill, and having a clear view.”

Although Mirzakhani passed away in 2017, her invaluable contributions to the field of mathematics endure, and her trailblazing career has paved the way forward for many women mathematicians to come.

Related News
23/04/2019
From where I stand: “Girls have to contribute towards innovation and technology”
04/10/2016
Take five with Joy Chebet Bii: Why does digital literacy matter for women and girls?
10/02/2016
Women and girls imperative to science and technology agenda
26/03/2015
From complex coding in Kigali to graduation gowns in Pittsburgh
24/02/2015
UN Women Executive Director addresses UNESCO Member States at Mobile Learning Week
END_OF_DOCUMENT_TOKEN_TO_BE_REPLACED