As Latin America enters a critical phase of the COVID-19 emergency, recently surpassing 5 million cases and 200,000 deaths , women domestic workers are raising alarm about the lack of economic relief, healthcare and other social protection, and organizing in solidarity to help other workers. 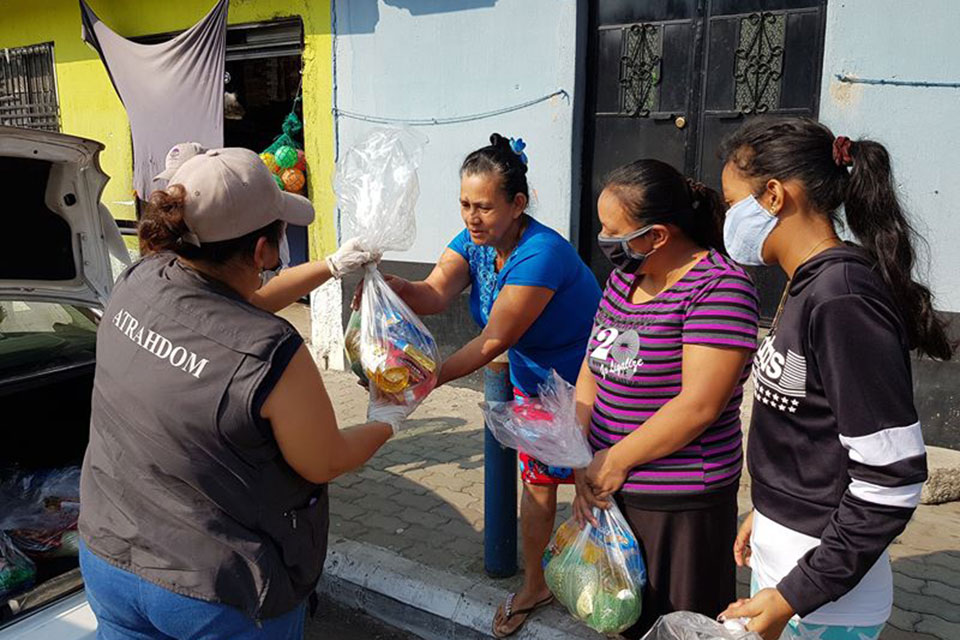 Since the outbreak of COVID-19, the civil society organization ATRAHDOM (Asociación de Trabajadoras del Hogar, a Domicilio y Maquila) has coordinated efforts to bring relief to the women most affected by the pandemic’s social and economic impact. Photo: ATRAHDOM

Since the outbreak of COVID-19, ATRAHDOM has coordinated efforts to bring relief to women domestic workers who are most affected by the pandemic’s social and economic impact, while supporting other, smaller women workers’ groups that have even less access to resources.

“We have taken all the prevention measures, but we have left our comfort zone to find the women who are in need and bring them help,” says Velásquez. With support from UN Women and other partners, ATRAHDOM has delivered food supplies, personal protection equipment, and health and hygiene kits to networks of women domestic workers spread across different parts of the country. “When we arrive with help, women receive us with joy and gratitude. We bring them very simple things, but they are essential things that they have been unable to afford,” she explains.

ATRAHDOM has also coordinated the delivery of cash transfers through online payment services, and purchased special protective equipment, such as face shields, for elderly domestic workers, since they face heightened risk of the disease. As most domestic workers lack health and social protection coverage, the organization is now seeking ways to facilitate their access to treatment and basic health services.

About a third of domestic workers in the country have lost their jobs or resigned due to fears of the contagion, and several more have seen a reduction in their salaries as employers too have lost income because of the pandemic.

Suleima Ojer, one of ATRAHDOM’s volunteers, says that the pandemic has affected the majority of the domestic work sector, and single mothers and elderly women are in dire need of economic relief and access to healthcare. Due to restrictions on public transportation, Ojer had to change from a full-time job in Guatemala City to a part-time job in Parramos, a district in the country’s central region, that pays her less. Despite her personal challenges, she continues volunteering with ATRAHDOM, and helps coordinate the delivery of essential goods to other workers in the area.

“Women have joined forces in solidarity to face the emergency, coordinating efforts to support those who have been most affected and in the time when it makes the most difference,” notes Adriana Quiñones, UN Women Representative in Guatemala

Leading a response in solidarity

In Latin America and the Caribbean, of the 11 to 18 million people who are employed in the domestic work sector, 93 per cent are women. Domestic work also represents up to 14.3 per cent of women’s jobs in the region, but the large majority (77.5 per cent) of them operate in the informal sector, lacking access to social protection and decent employment conditions.

This is where the domestic workers associations and unions play a key role. “Their response has been truly admirable”, observes Adriana Paz, coordinator for Latin America at the International Domestic Workers Federation (IDWF). “They have raised funds, door to door, at the local level and with political authorities. They have organized community kitchens [and] have brought food to their affiliates’ plates.”

On one hand, the COVID-19 emergency has exposed how unprotected the domestic work sector remains, but it has also shown a deep and powerful solidarity among domestic workers. “Domestic workers’ associations and unions are among the few organizations that have brought relief to the poorest neighbourhoods. Even though they have scarce resources, they do their work with compassion and solidarity,” adds Paz.

In Guatemala, Velásquez tells the story of visiting a group of former maquila workers in Chimaltenango, in the country’s central region, who are now producing face masks and other protective equipment. “They donated part of their production so that we could distribute [protective equipment] among other women workers. We distributed some of them among the children and the domestic workers we met in Escuintla, [which is 60 miles away]”. These women may not know each other, but they are their sisters’ keepers, says Velásquez.

In Bolivia, the National Federation of Domestic Workers prioritized covering their affiliates with health insurance. Leyda Alonzo, its executive secretary, says, “no domestic worker has health coverage, a key necessity in any context, but particularly now, during a pandemic. When we get sick or have an accident, we need to pay for our own services and employers usually [avoid] this responsibility.”

As part of its COVID-19 response, the Federation and UN Women  in Bolivia joined efforts to include over 500 domestic workers, aged 18 to 64, in an inclusive insurance scheme developed by the Government of Switzerland and Fundación para el Desarrollo Productivo y Financiero (PROFIN).

What “building back better” means for domestic workers

The effects of the pandemic go well beyond the increased health risks and added economic pressures for women domestic workers. Building back better, to most of them, involves valuing domestic work as an essential activity that sustains the society. “Our work guarantees the wellbeing of families, so we should value this work [by putting in place]legislation and protections, but also by respecting the women who perform this function”, explains Paz, from the International Domestic Workers Federation.

Increasing awareness among workers about their rights, and knowledge about the mechanisms available to seek help is also essential.

Patricia Castillo, a domestic worker from Guatemala’s Pacific Coast, who earns a basic salary without benefits or paid leave, illustrates this point: “Most of us need guidance. When we get an offer, we do everything by verbal agreement, without a contract or anything in writing. In my case, I accepted the conditions because I needed to work.”

UN Women’s Representative, Adriana Quiñones says, “the COVID-19 emergency has had an impact at all levels of society, but domestic workers and their families perform essential work that needs to be valued and remunerated accordingly. Domestic workers have modeled for us what a solidarity response looks like, we must learn from them and support their efforts”.

UN Women, in partnership with the International Labor Organization and the Economic Commission on Latin America and the Caribbean, developed a policy brief on Domestic Workers in Latin America and the Caribbean during the COVID-19 Crisis. The brief offers additional recommendations on the best ways to incorporate domestic workers in COVID-19 response efforts. Read them here: English / Spanish

Related News
10/06/2016
From child labourer to women’s rights defender
29/06/2020
In Guatemala, investing in indigenous women’s economic empowerment is key to building back better after COVID-19
15/10/2018
From where I stand: “Women don’t have to follow orders from men…women have rights too”
31/05/2018
From where I stand: “I can build a solar lamp in twenty minutes”
28/03/2017
In the words of Maximina Salazar: "My friend, you have rights, don’t let others trample on them."
END_OF_DOCUMENT_TOKEN_TO_BE_REPLACED