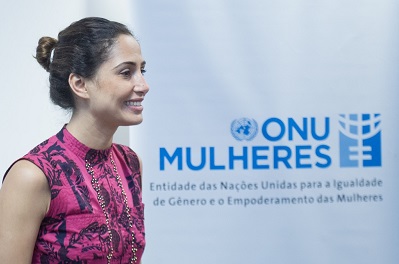 As National Ambassador of UN Women Brazil, Ms. Pitanga will act in defense of women’s human rights through empowerment and gender equality and in the fight against racism, sexism and prejudice. She plans to speak out and use her social media accounts to this end.

“It is with great honour and satisfaction that I am joining the UN Women Brazil team as a National Ambassador. I believe that Brazilian society currently feels the need to speak out on and defend the empowerment of women and the equality of possibilities, upward social mobility, citizenship and rights,” said Ms. Pitanga. “I’m joining UN Women at a time when women are coming together to talk about their role in society and to claim a space in the media through which to express themselves and reflect on their lives. Beyond the terrible statistics of death and cruelty we suffer, women and women’s causes need visibility, access to information and citizenship.”

The actress is Director of the NGO Movimento Humanos Direitos (Humans and Rights Movement), which has focused on slave labour, abuse of children and teenagers and the promotion of the rights of young black people, quilombola people (former slaves), indigenous people and of the environment.

Ms. Pitanga is a long-time supporter of the United Nations. In 2013, she took part in the International Labour Organization’s campaign “Red Card against Child Labour” ahead of the Third Global Conference on Child Labour. In 2012, at the Rio+20 Conference in Brazil, Ms. Pitanga stood alongside Edward Norton, UN Goodwill Ambassador for Biodiversity, as master of ceremonies of the Equator Prize, awarded by the United Nations Development Programme (UNDP) and aimed at indigenous communities involved in environmental preservation. In 2007, she served as a volunteer for the UN campaign promoting the Millennium Development Goals, “Project to bring the Millennium Goals to the community”, headed by UNDP and the United Nations Volunteer Programme.

Some of the social causes Ms. Pitanga has supported include being advisor to the World Wildlife Fund and supporter of the Amnesty International Campaign “Young Black Alive - #ICare”, the Greenpeace campaign against deforestation, and the Movimento Humanos Direitos campaigns against child prostitution and the outsourcing of work, to name just a few.

Statement: The decree barring women in Afghanistan from working in non-governmental organizations is yet another stark violation of women’s rights
In the words of Jaha Dukureh: “As long as I am alive, I will wake up every single day and scream to the world that FGM is wrong and child marriage is not different from rape.”
Driving data-based progress on violence response and prevention in Colombia
Pushing forward: Dismantling anti-LGBTIQ+ discrimination in Argentina
Press release: UN Women launches first-ever National Committee in Spain
END_OF_DOCUMENT_TOKEN_TO_BE_REPLACED