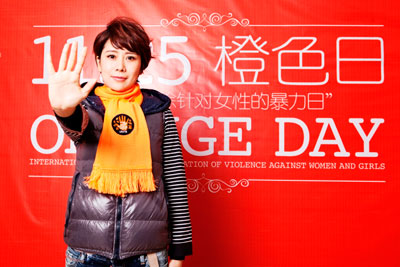 One of China’s most well-known actresses, Hai Qing was appointed National UN Women Ambassador for China on 22 October 2015 at a high-profile event in Hangzhou, China. She will serve to promote gender equality and use her influence to garner public attention on gender issues and ending discrimination and violence against women in society.

Throughout her successful acting career, Ms. Hai has been committed to gender equality and sustainable development. In late 2011, she attended the UN climate conference held in Durban, South Africa, where she spoke on behalf of those most vulnerable to the impacts of climate change, including women. In 2012, she attended the UN Conference on Sustainable Development in Rio de Janeiro, Brazil, and shared her experience visiting rural areas in China. She called for greater attention from governments, the private sector, media and general public to the challenges faced by women in sustainable development. Designated as a UN Women Gender Advocate for China in 2013, Ms. Hai has since been actively involved in several initiatives and events organized by UN Women.

“Firstly, I would like to thank UN Women for appointing me as its National Ambassador and for enabling me to work together with them to fight for the rights and interests of women all over the world,” Hai Qing said during the appointment ceremony. “I believe ‘gender equality’ is not just something that exists virtually in a slogan. It is about making it a reality. And I encourage everyone in the world to work hard towards getting women the same treatment and respect as men, whether in the family or in society.”

One of China’s most famous actresses, Hai Qing graduated from the Beijing School of Film in 2001 and since then, has been best-known for her role in the popular TV series “Beautiful Daughter-in-Law” (2009), which earned her the nickname “China’s Favourite Daughter-in-Law”. Her outstanding performances have been recognized with awards including: “Most Popular Actress” at the 8th Jinying Television Art Festival (2010), “Audience’s Favourite Actress” at the 25th China Television Jinying Award (2010), and “Best Actress” at the 28th China Television Feitian Award (2011). Her roles in “Finding Mr. Right” (2013) and “Even Rag Ladies have Springtime” (2013) have also helped break gender stereotypes. In the first role she played a lesbian; in the second, a divorced housewife who gains economic independence—both of which were roles rarely seen before in film or television in China. Other popular TV shows in which Ms. Hai has appeared include: “Sacrifice” (2010), “Dwelling Narrowness” (2009), “Angel Heart” (2012) and “Double-Sided Adhesive Tape” (2007).

Statement: Protect the rights of all Afghans
UN Women statement on women’s rights in Iran
Speech: Taking stronger action to keep the promises of Generation Equality
UN Women statement on the death of Mahsa Amini
Statement: ‘Meticulously constructed policies of inequality’ – Afghanistan one year on
END_OF_DOCUMENT_TOKEN_TO_BE_REPLACED