On 13 March, 2015 Vanuatu was hit by Category Five Cyclone Pam, the worst disaster in the island nation’s recent history. More than half the population (of more than 265,000) was affected and around 96 per cent of crops were destroyed, leaving many women without food or produce to sell. In the months following the cyclone, a prolonged El Niño-fueled drought prevented replanting, causing months of crop failure, water and food insecurity and the decimation of the livelihoods of market vendors, the majority of whom are women. UN Women has been working with market vendors, market councils, provincial and national governments in Vanuatu, alongside the Australian Government, to help women restore their livelihoods and build resilience to future external shocks like Cyclone Pam. UN Women through its Markets for Change project helped establish vendor associations in Vanuatu and other Pacific islands. Below are portraits and testimonies of the women who are part of the Silae Vanua Market Vendor Association, which is supported by UN Women. 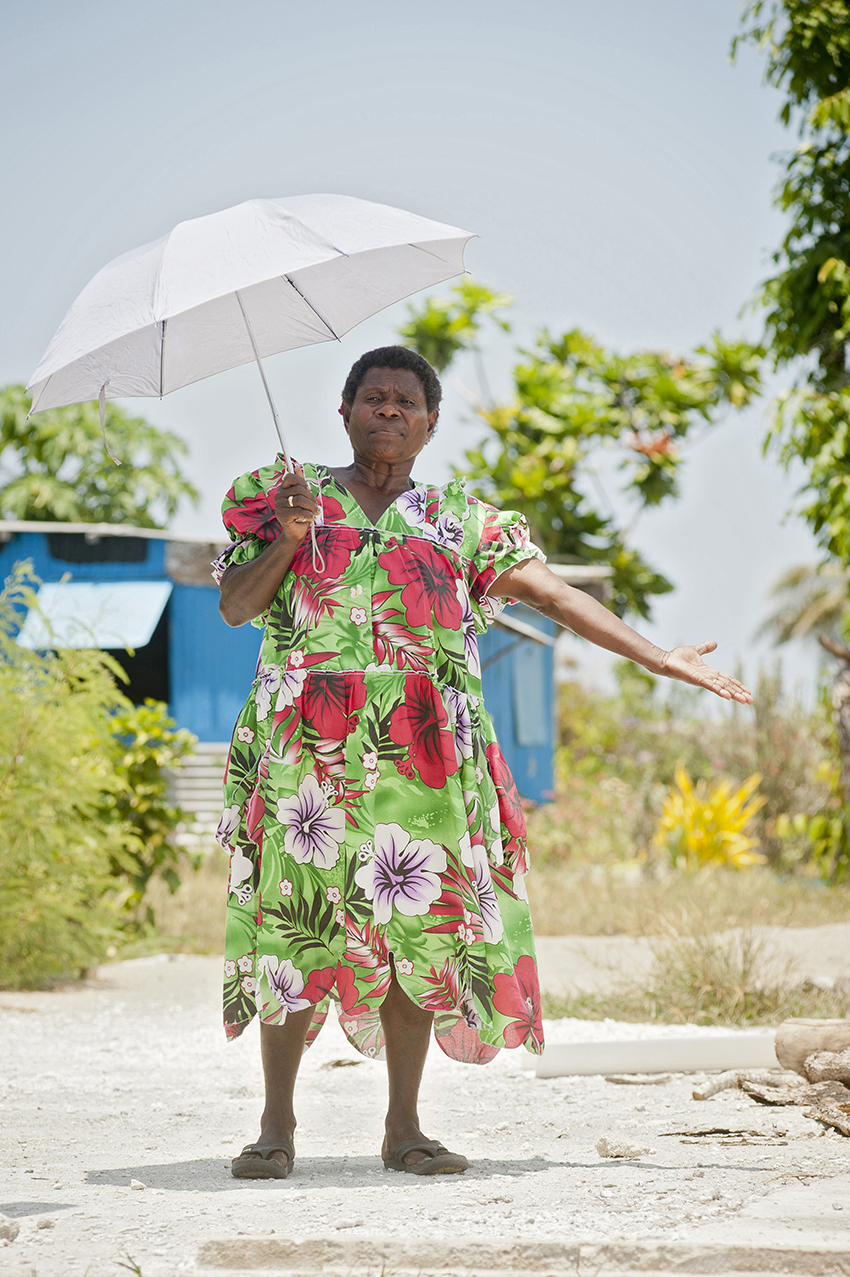 “We made a place for the women’s association to meet and talk but it was destroyed in the Cyclone. Now I have to walk to every house to visit the women.”

Janis Kalo, 58, leads the local women’s association and church groups on Moso — which is known as the ‘dry island’. Cyclone Pam destroyed many houses and village buildings, as well as village crops. Janis and her family have a garden on the mainland, where there are fewer pigs and the sun is not as strong, but the drought means the crops are growing slowly. Instead, she and her family must buy their food from the market. 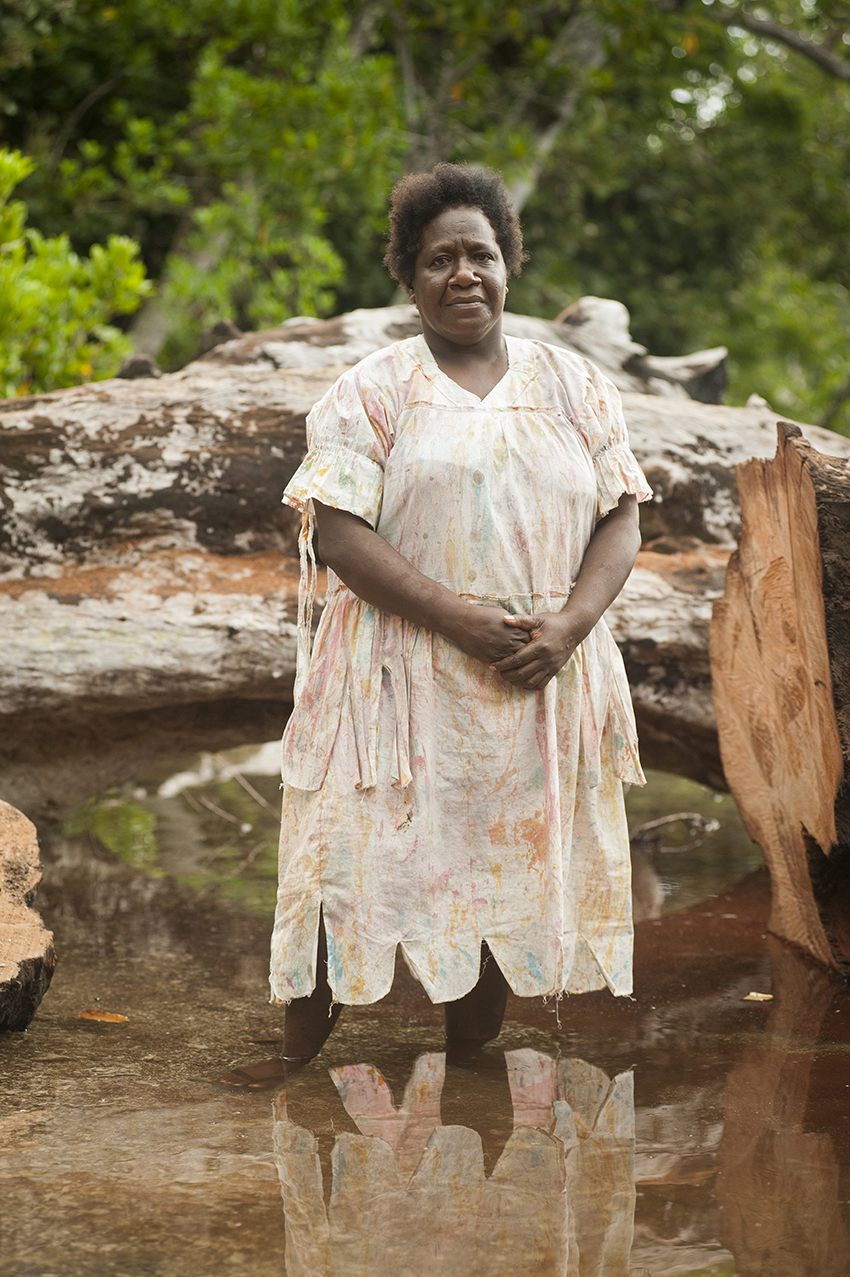 “People are coming from other villages and washing up in the river from where we get our drinking water. We are trying to provide some proof that the water is being ruined. The quality of our water is a big concern.”

Carolyn Baba, 42, stands in front of a fallen tamarind tree that sustained her family income by providing wood for carving after Cyclone Pam devastated her garden in March 2015. The El Niño drought that followed now poses additional problems. New crops are stunted and shriveled and the house water tank, which supports 12 families in Meten Village on Efate Island, is empty. Water must now be collected from a river 20 minutes away. 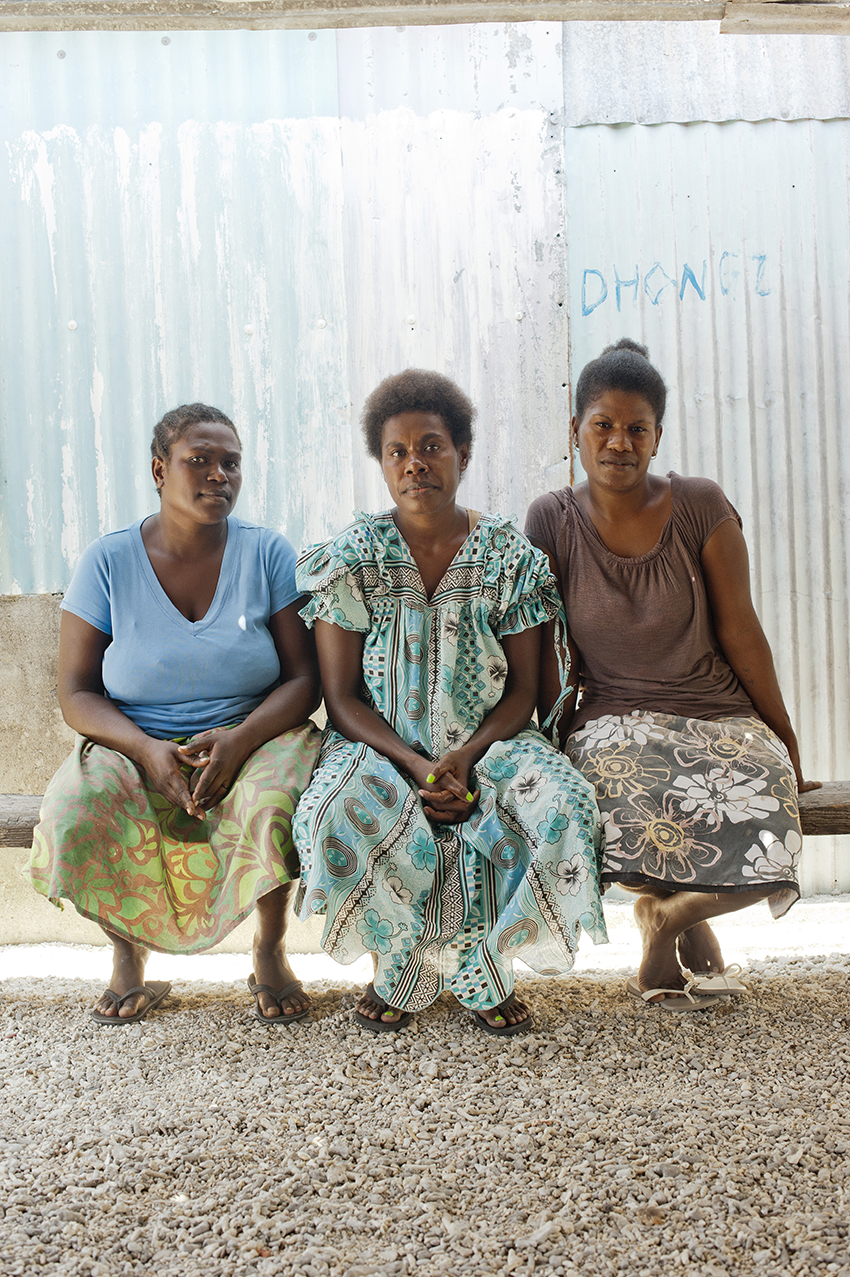 “After Cyclone Pam there was no food. The island food was destroyed. Now we just buy rice. Then we planted manioc, small yam, taro, island cabbage. But it’s not ready because of El Niño. I’m looking forward to the next planting season but I’m worried about the sun.” — Roslyn Moli

Jenny Tom (30), Roslyn Moli (30) and Julia Morris (29) live in Tasariki village on Moso Island. All three are members of Silae Vanua, the first market vendor association to be legally registered in Vanuatu, and in the past they headed to the market by boat and road twice a month, staying in Port Vila for up to five days at a time. Now, however, there is very little fresh produce on the island to eat, let alone sell. A year ago Moso was among the islands devastated by Cyclone Pam and is now suffering from the effects of an El Niño drought. 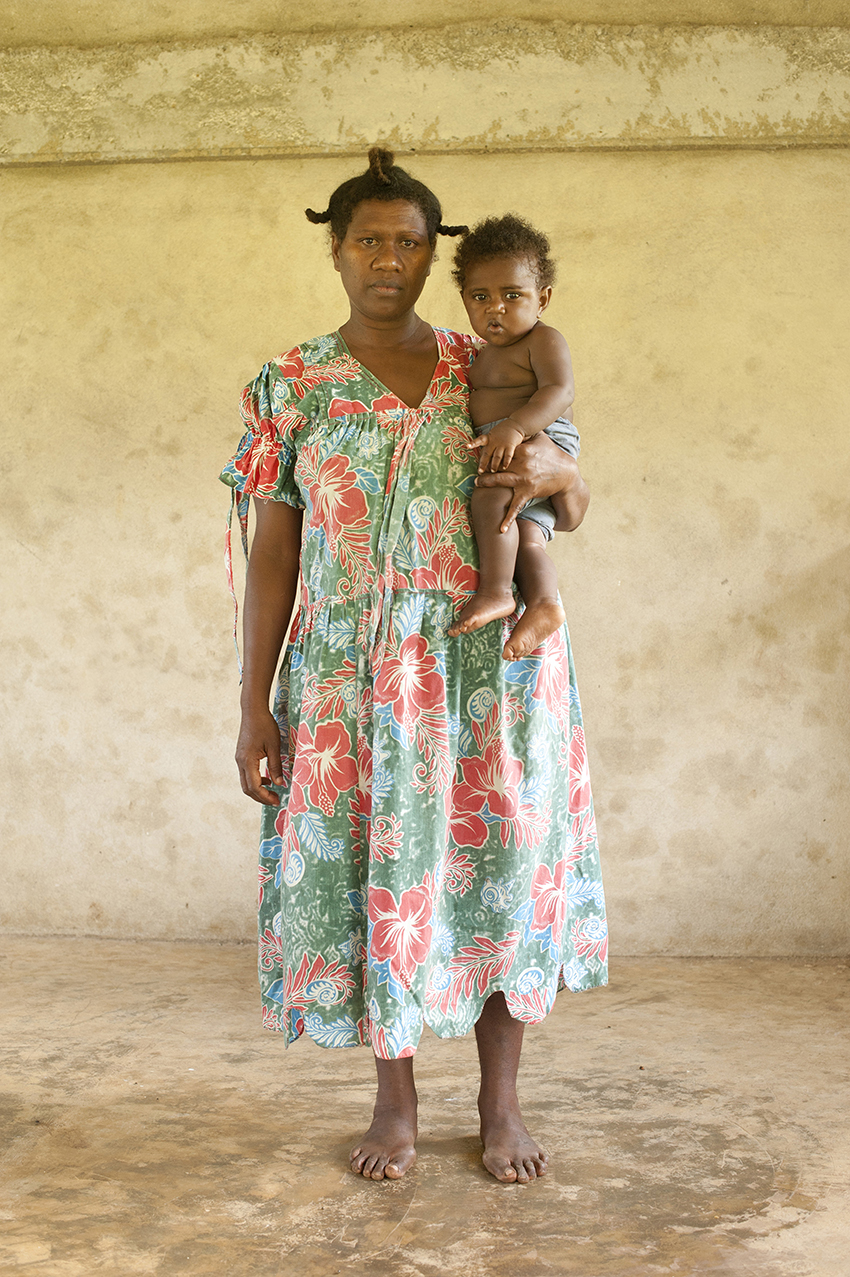 “Breastfeeding is hard when we don’t have much water. I use the salt water and the small amount of freshwater we have for the children.”

A trained nurse-aide, Lody Samson, 39, is a mother of three children under 14, including son Solomon Samson who is 8 months old. The coastal village of Koinga where she lives was hit hard by Cyclone Pam, which spoiled their food crops. Now most of the village’s water tanks are empty. Lody and her husband feed people who come to the church, but the lack of water makes it difficult. 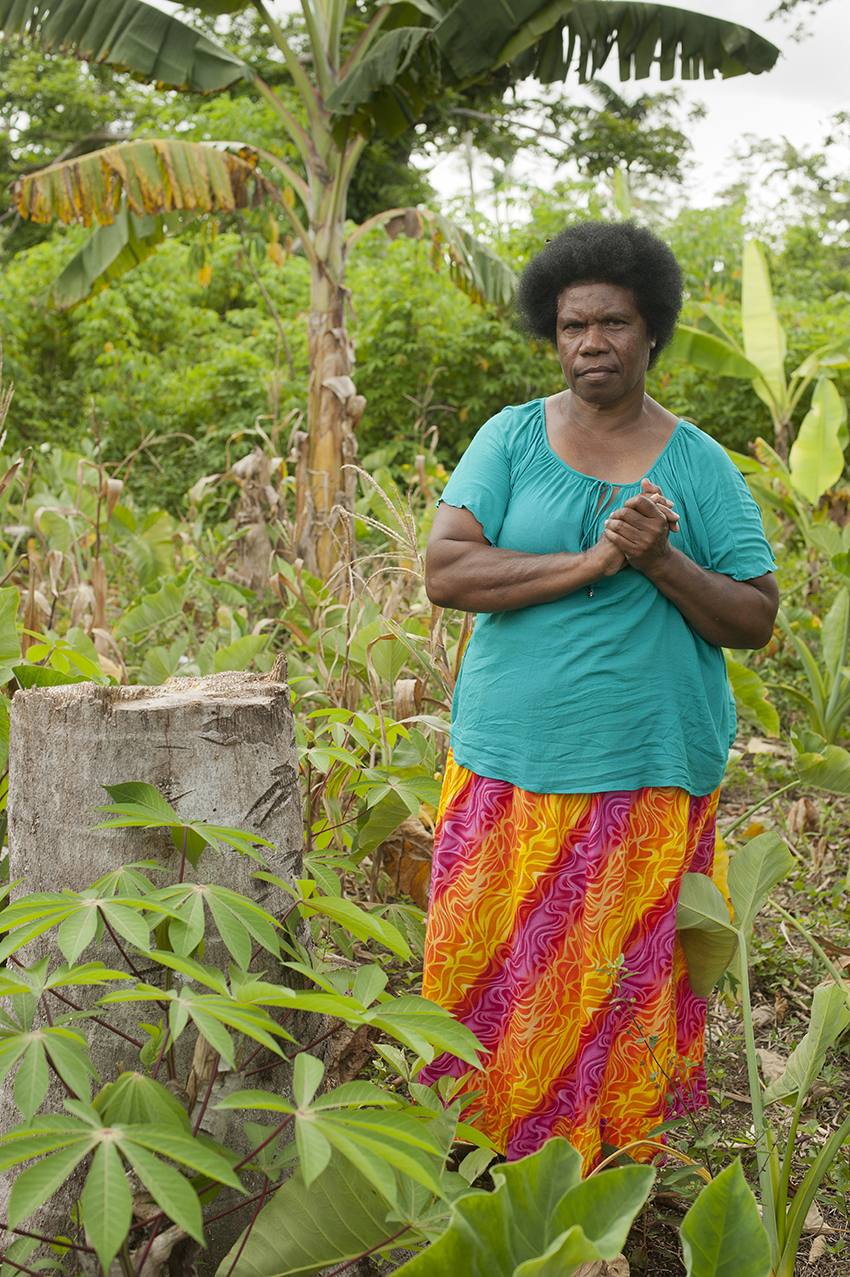 “Sometimes I feel sad and I’m worrying. The mamas need to clean but the stream is dry. The spring runs now but it is small.”

Serah Toara, 58, is an executive member of the Silae Vanua Market Vendor committee and works part time as a pastor, in particular caring for women in community. Before Cyclone Pam, Serah earned money from selling produce she grew in her garden on a plateau in Teouma Dark Bush just outside the capital of Port Vila. Cyclone Pam destroyed the garden and the replanted crops are stunted and dying because of the El Niño drought. While she has access to a spring on her land, other villagers are walking for up to an hour every day to collect water for drinking and washing. 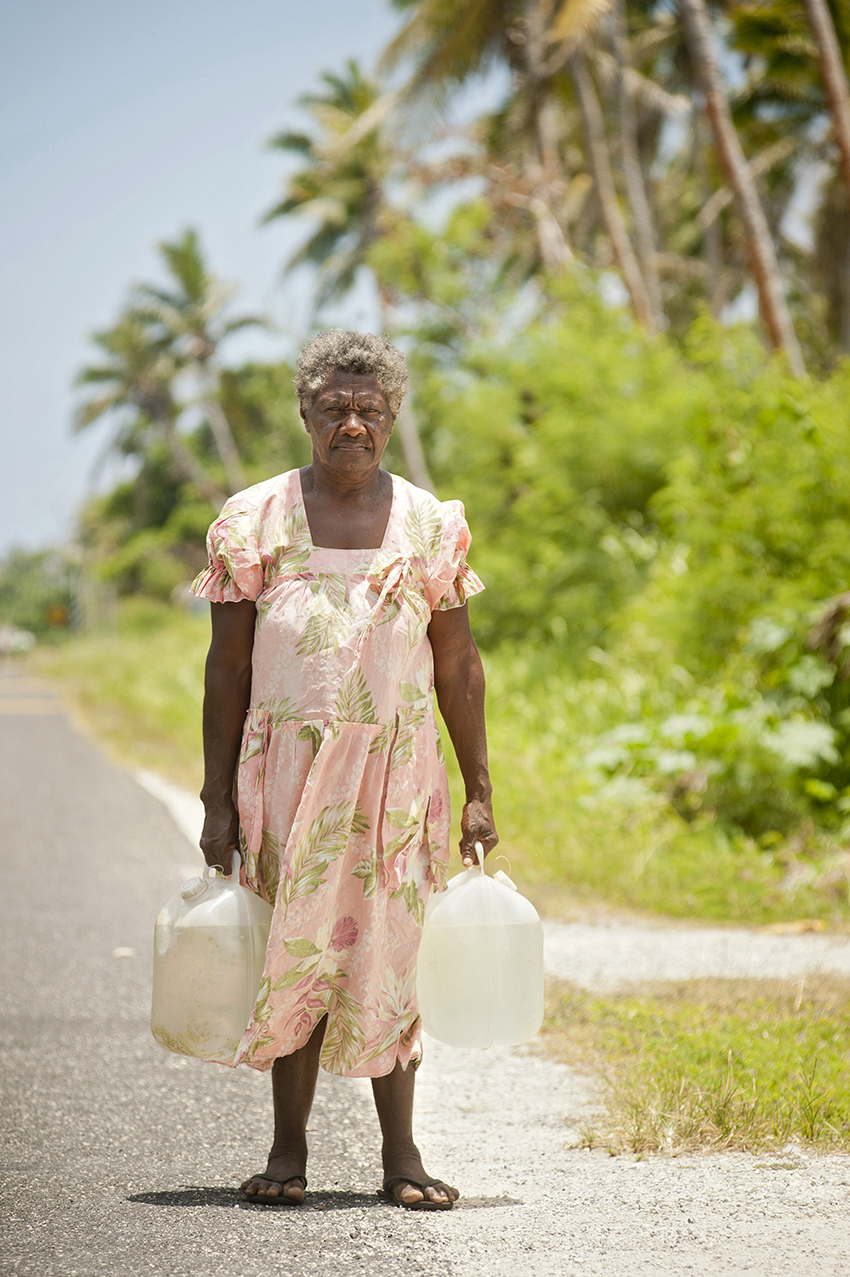 “It is hard work but it is good. You are put here to live in this world to live for a purpose; to look after the community and the village.”

Edna Kalskar is president of the Young Ladies Association, active in her church community and a member of the Silae Vanua Market Vendors Association. A widow, she lives with her son, daughter-in-law and grandchildren. Since Cyclone Pam, several houses in Eton village do not receive piped water from the village tank. Instead, Edna must walk or catch the bus to collect water at a river 2km away. 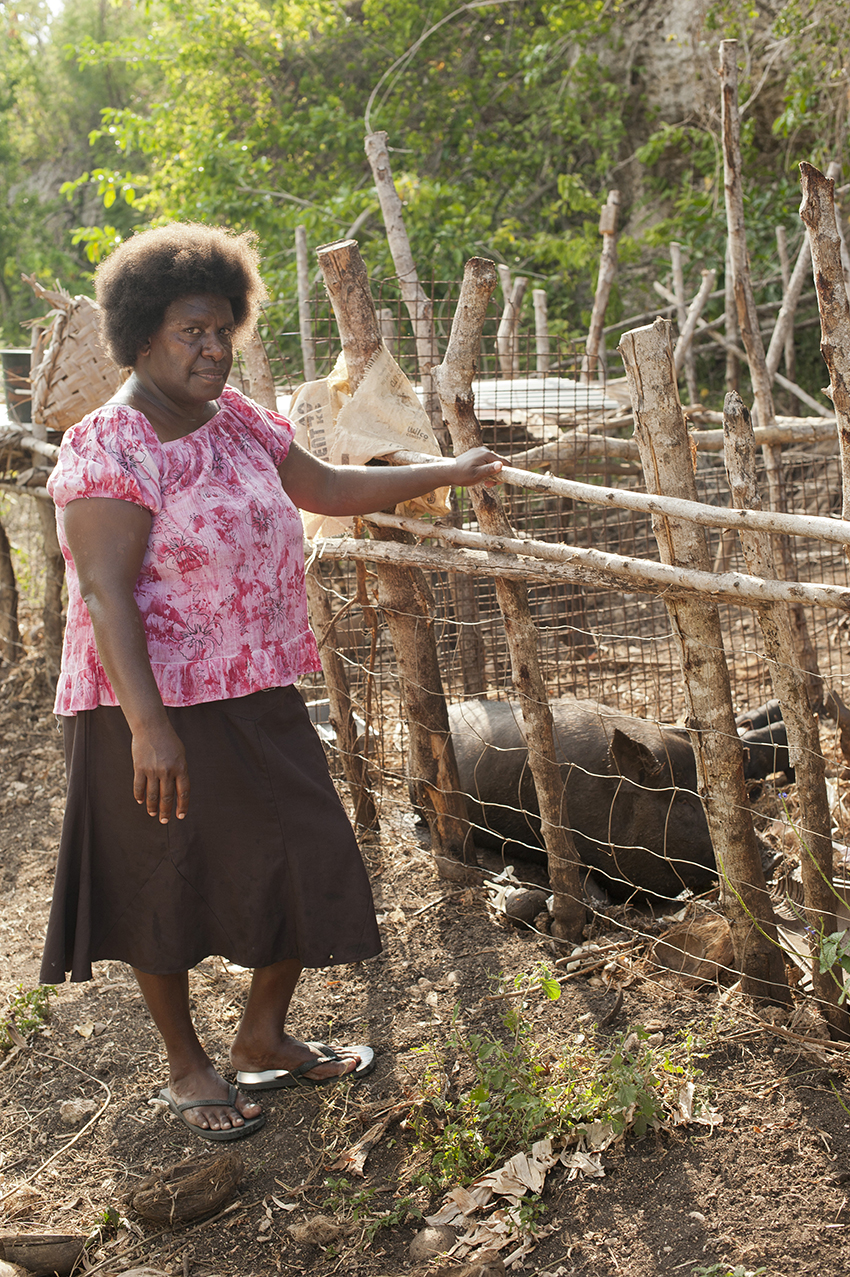 “When we have money we go to the market to buy fruit. We even buy paw paw [a local fruit] and pineapple. The children run around but afterwards I can’t give them water, even though they ask for it.”

Laisavie Daisy Joel, 42, lives with her family of five and owns a pig and a cow. The El Niño drought means that she has to go to Port Vila by bus to get waste bread to feed them, something she can only do when she has the money. She attended an agriculture course ahead of the drought and has put what she learned into practice, but the sun is so hot that the crops are not growing and the water is running out. Photo: UN Women/Murray Lloyd 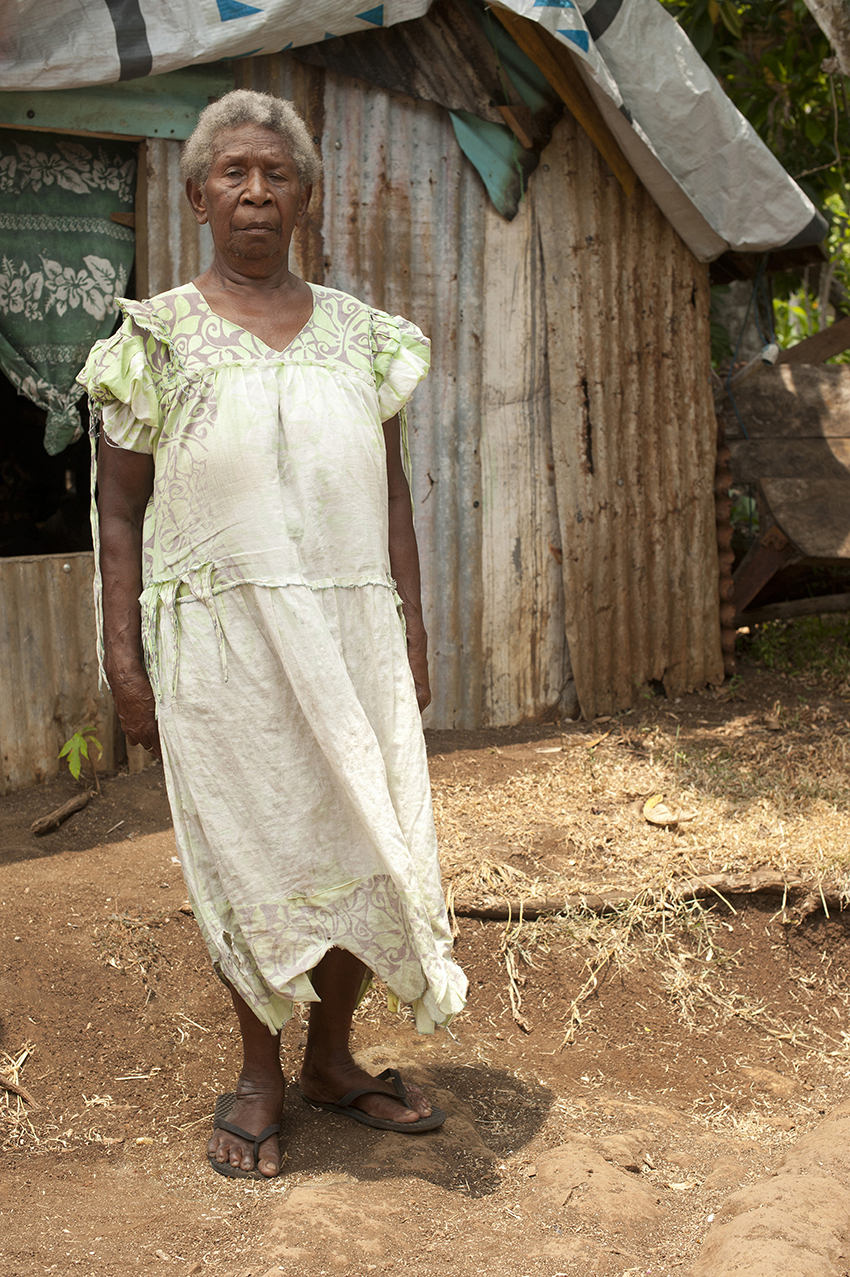 Netty Ismail, 77, lost most of her house in Cyclone Pam. Ten months later she still has a tarpaulin for her roof, has lost her garden to the El Niño drought and relies completely on her late husband’s extended family for support.