Gender equality through the cartoonists’ lens

Humour and satire have great potential to bring visibility to and foster critical thinking on gender equality issues.

Editorial cartoonists around the world are helping to end gender discrimination with spirited and thoughtful depictions of the inequalities and injustices women face. They do this often at the cost of risking their own lives, as they face increasing opposition for the work they create. 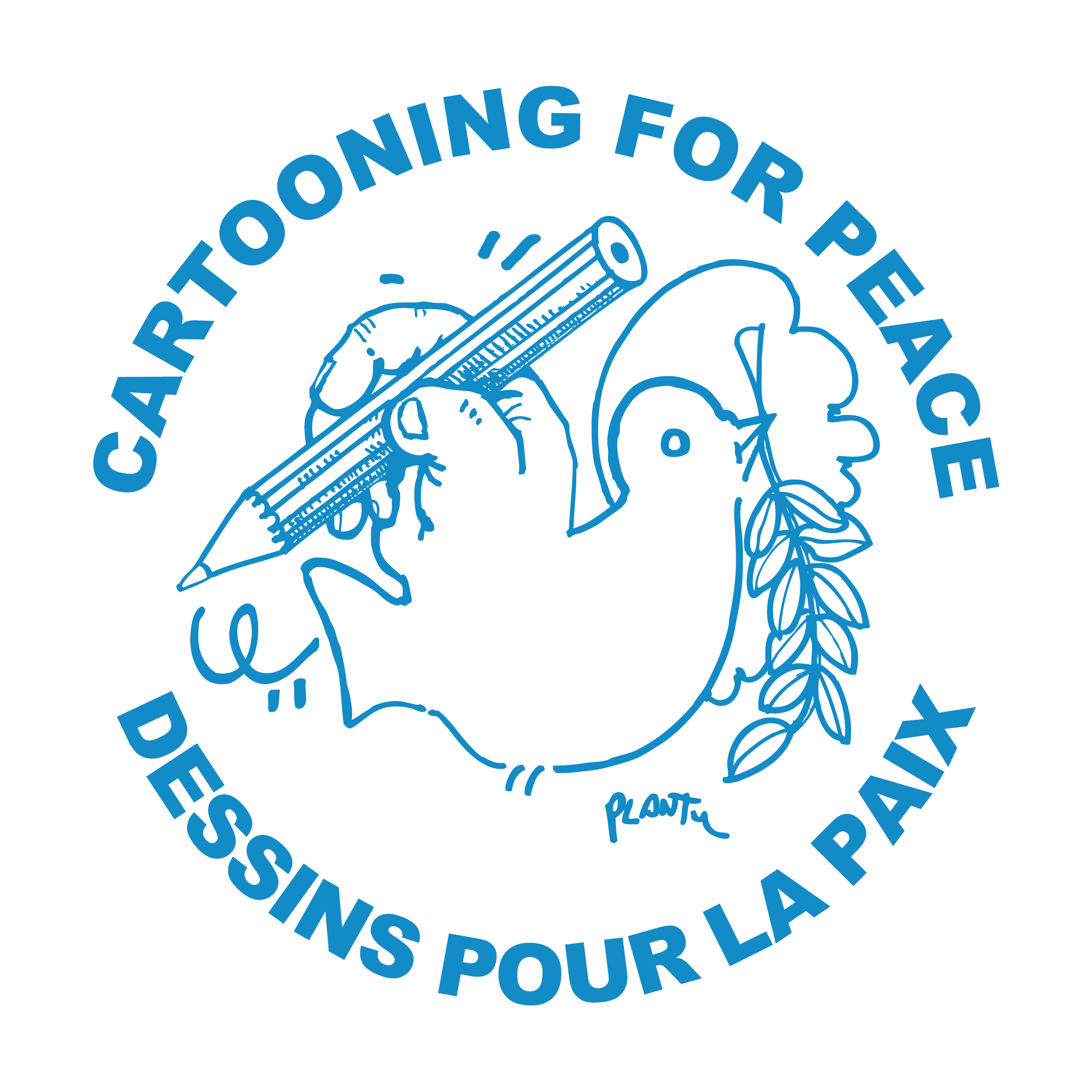 UN Women and Cartooning for Peace, a non-profit international network of 162 editorial cartoonists from 59 different countries, have joined forces in a collaboration for International Women’s Day and the 62nd session of the UN Commission on the Status of Women (CSW62).

Founded by editorial cartoonist Plantu in 2006 and placed under the patronage of former UN Secretary-General and Nobel Peace Prize winner Kofi Annan, the association is committed to the promotion of editorial cartoon as a means of defending human rights, including gender equality, and freedom of speech. This is done through events, publications and exhibitions; the use of cartoons to denounce all forms of intolerance, to raise young and vulnerable people’s awareness about major social issues; and to provide visibility to threatened cartoonists.

Here is a selection of cartoons related to women’s empowerment and gender equality created by members of Cartooning for Peace. They are part of the book “Make place for women!” which spotlights many of the challenges women encounter in their daily lives such as, education, sexuality, work or religion. The book, prefaced by Elisabeth Badinter, elder stateswoman of feminism, is part of the Cartooning for Peace collection launched in 2017 and edited by Gallimard. Royalties of the book are donated to Cartooning for Peace to support threatened cartoonists. 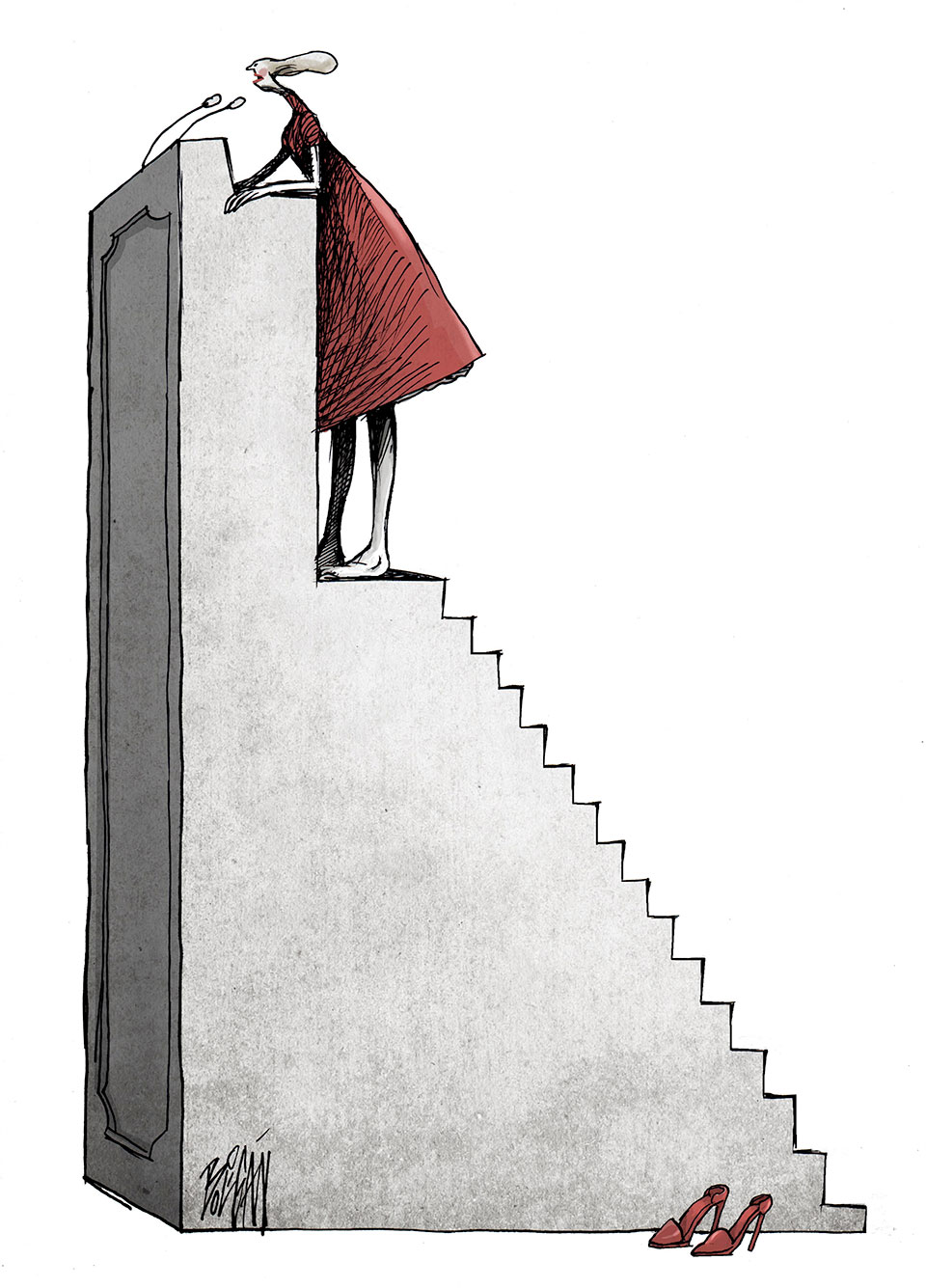 Angel Boligan, from Cuba, currently resides in Mexico. Cityhas worked as editor, illustrator and cartoonist for El Universal and Conozca mas. He currently works as an editorial cartoonist for the humour magazine El Chamuco. He has received more than 120 awards and recognition at international cartoon contests. 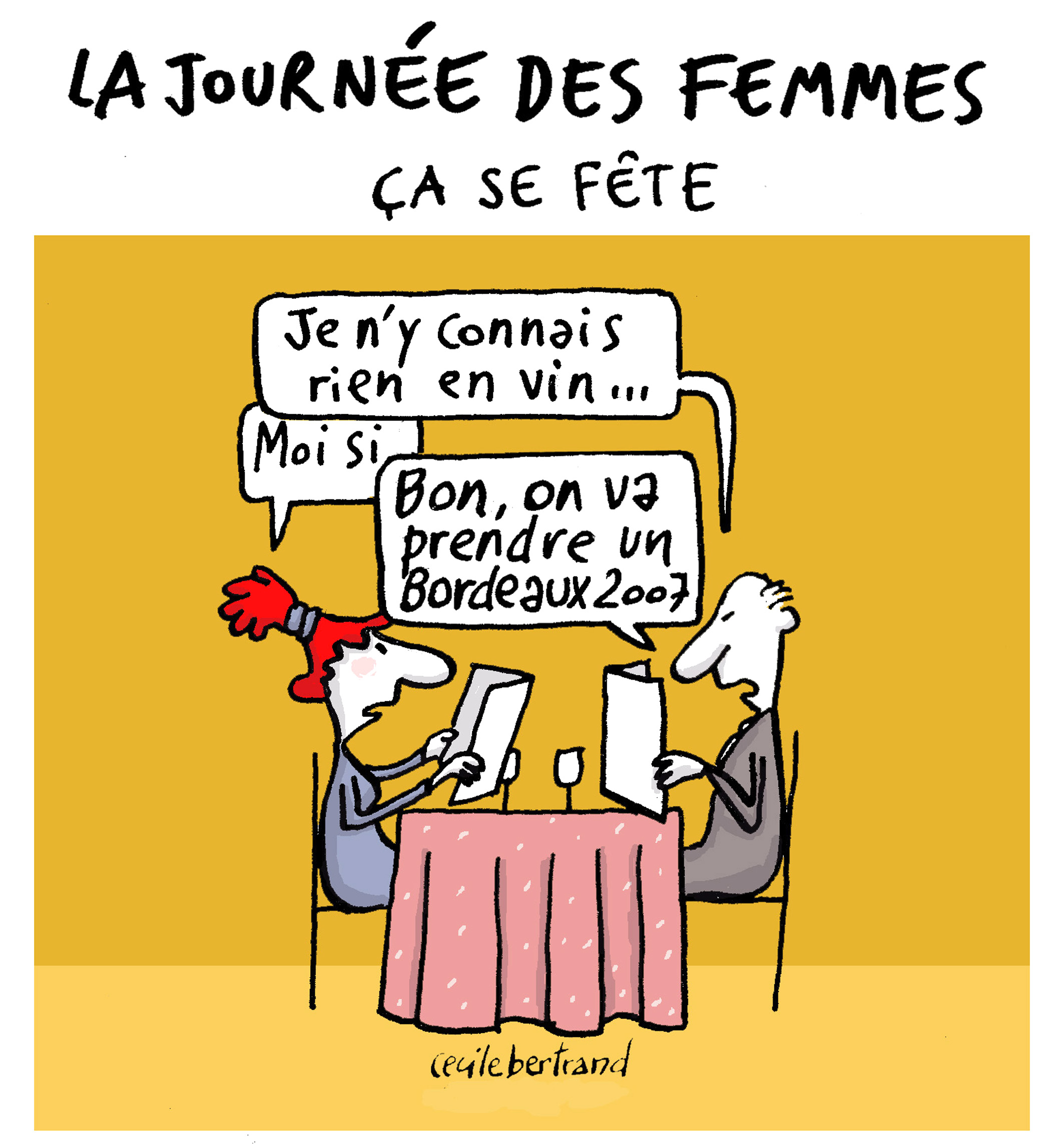 Let’s celebrate Women’s day
I don’t know anything about wine
I do
Well, let’s take the Bordeaux 2007

Cecile Bertrand, from Belgium, is the editorial designer at La Libre Belgique since 2005, having worked in the past for miscellaneous newspapers and magazines, such as Le Vif/L’Express. In 1999, she received the second Prize of the Press Cartoon Belgium, and the Grand Prix in 2007 and in 2011 for a cartoon published in La Libre Belgique. 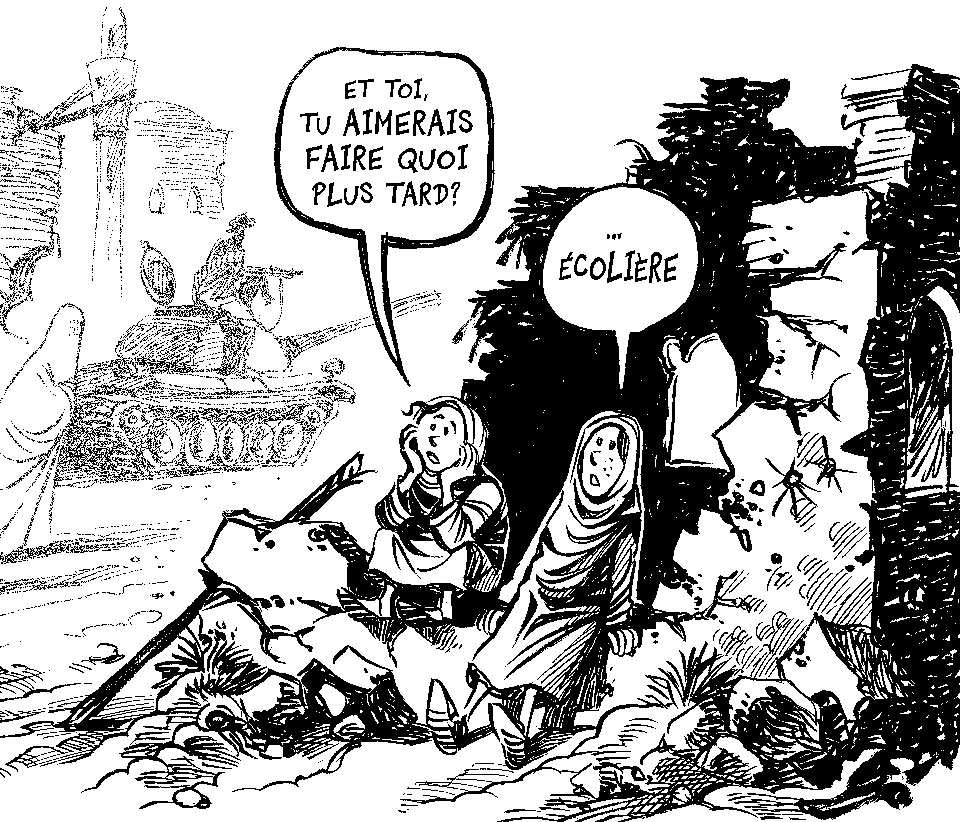 And you, what would you like to be when you are older?
A (school) student

Patrick Chappatte, born in Pakistan, now based in Geneva, is an editorial cartoonist for The International New York Times, as well as for Swiss newspapers Le Temps and NZZ am Sonntag. In 2011 and 2015, Chappatte received the Overseas Press Club of America’s Thomas Nast Award for best cartoons on international affairs. He is also co-founder and vice president of Swiss foundation Cartooning for Peace. 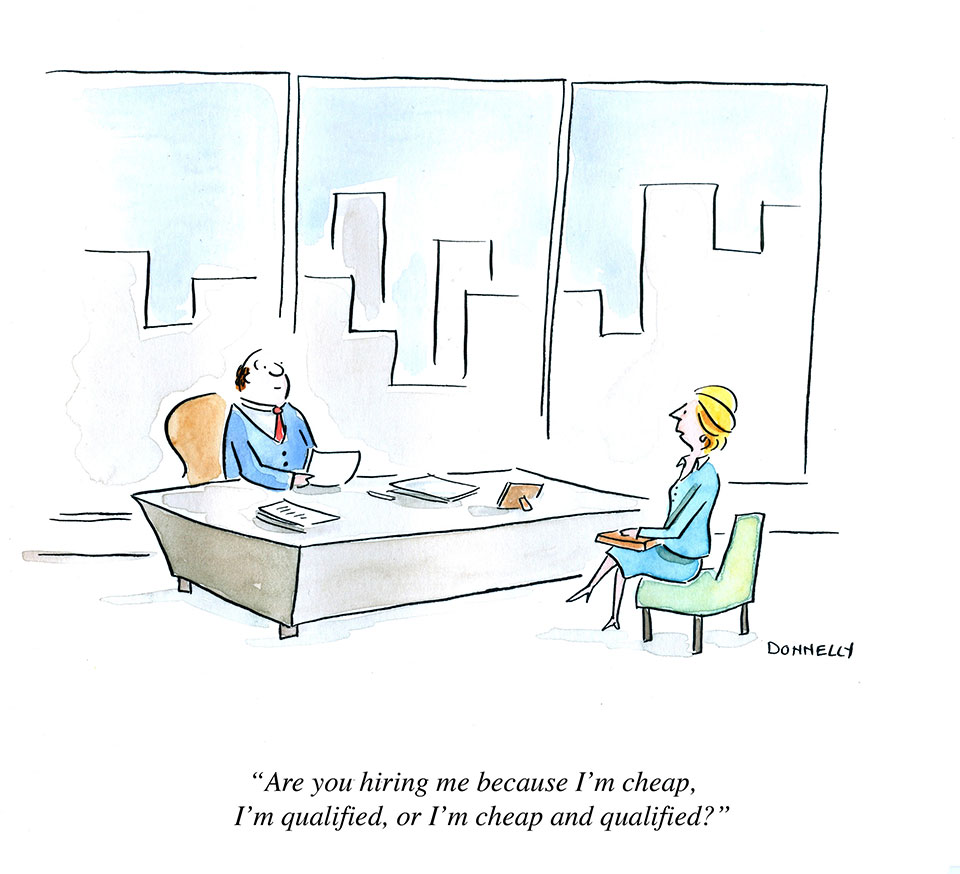 Liza Donnelly, from the United States, is a cartoonist and writer with The New Yorker Magazine, and resident cartoonist at CBS News. Her work also appears in several other outlets, from the New York Times to Politico and Glamour. Donnelly is a Cultural Envoy for the US State Department, traveling around the world speaking about freedom of speech, cartoons and women’s rights. She is a recipient of the Woman of Distinction Prize from the American Association of University Women. 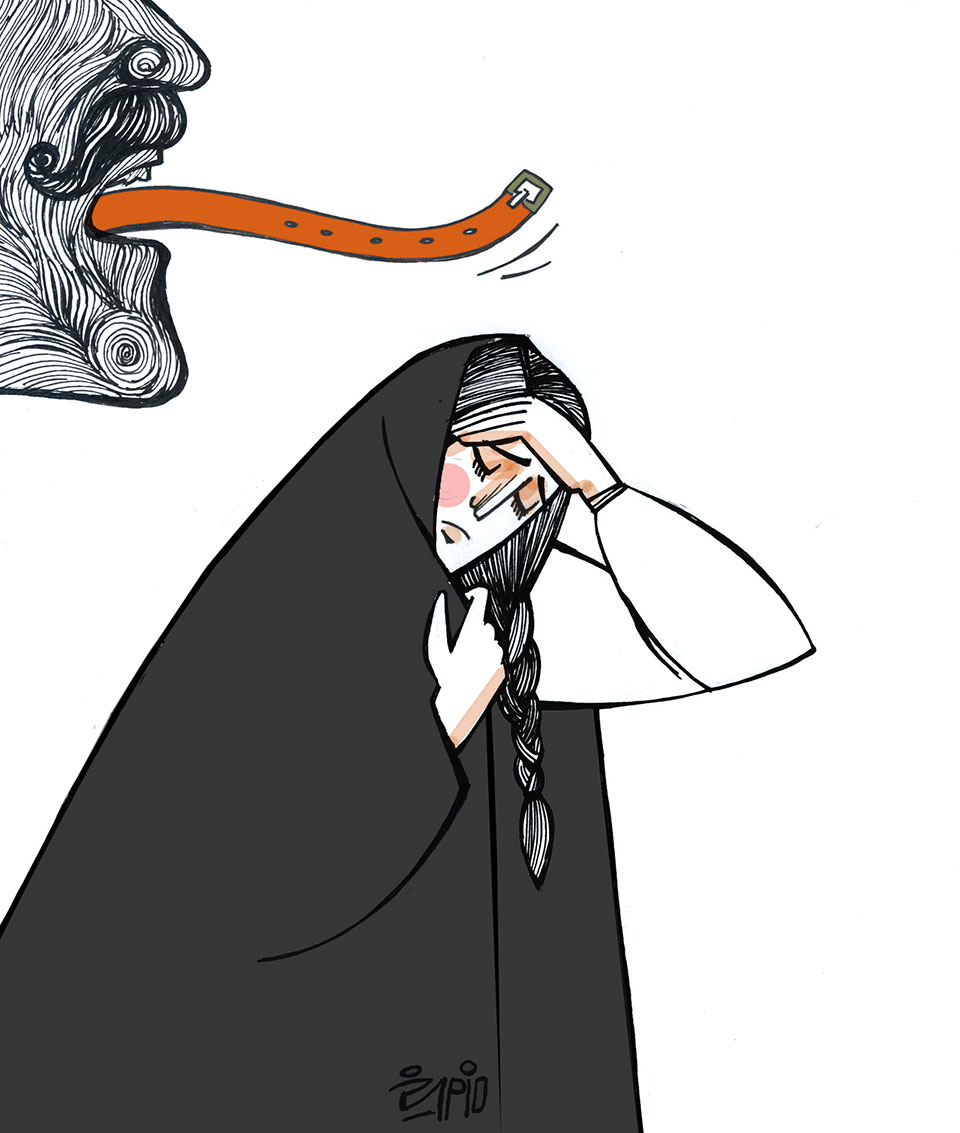 Firoozeh Mozaffari, from Iran, works with several newspapers such as Shargh, Etemad, Farhikhtegan and a news website Khabaronline. She has received several awards for her cartoons during festivals in Iran and has been awarded the first International Prize of Cartooning for Peace by Kofi Annan in 2012. 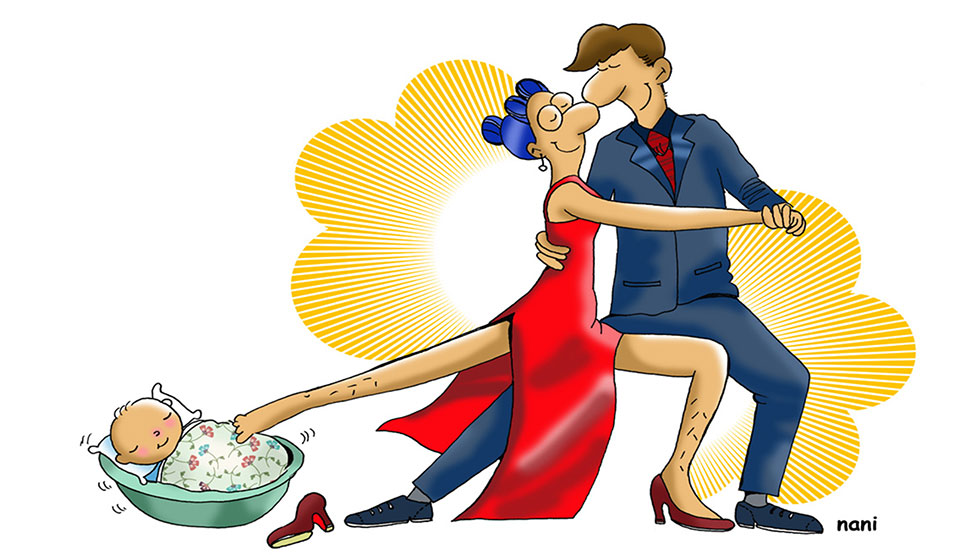 Adriana Mosquera Soto (Nani), half Colombian and Spanish, has worked with a lot of newspapers from the Hispanic world, such as El Tiempo, El Espectador, La Razón and El País. She is a contributor to the fight against gender inequality, and has worked to make women cartoonists visible in the world. She has partnered with the UN through her comic character Magola in Colombia, which has been used as a symbol for gender equality campaigns and text books. 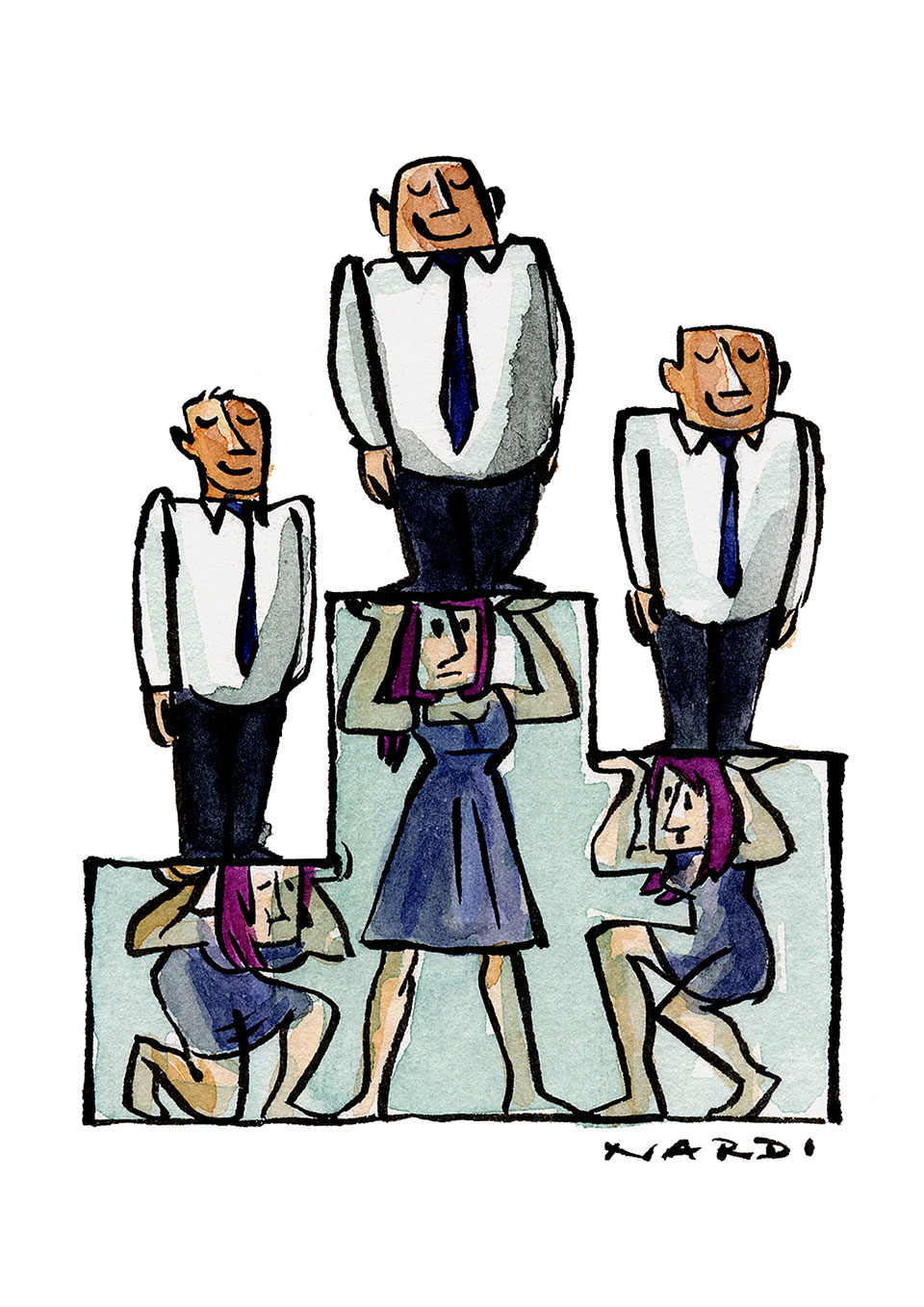 Marilena Nardi from Italy, has collaborated with many Italian newspapers such as Corriere della Sera, Diario, Barricate! or L’Antitempo. She is now drawing for Il Fatto Quotidiano, for the quarterly magazine Espoir and for online newspapers such as Aspirina. She has received more than 50 awards in her career. 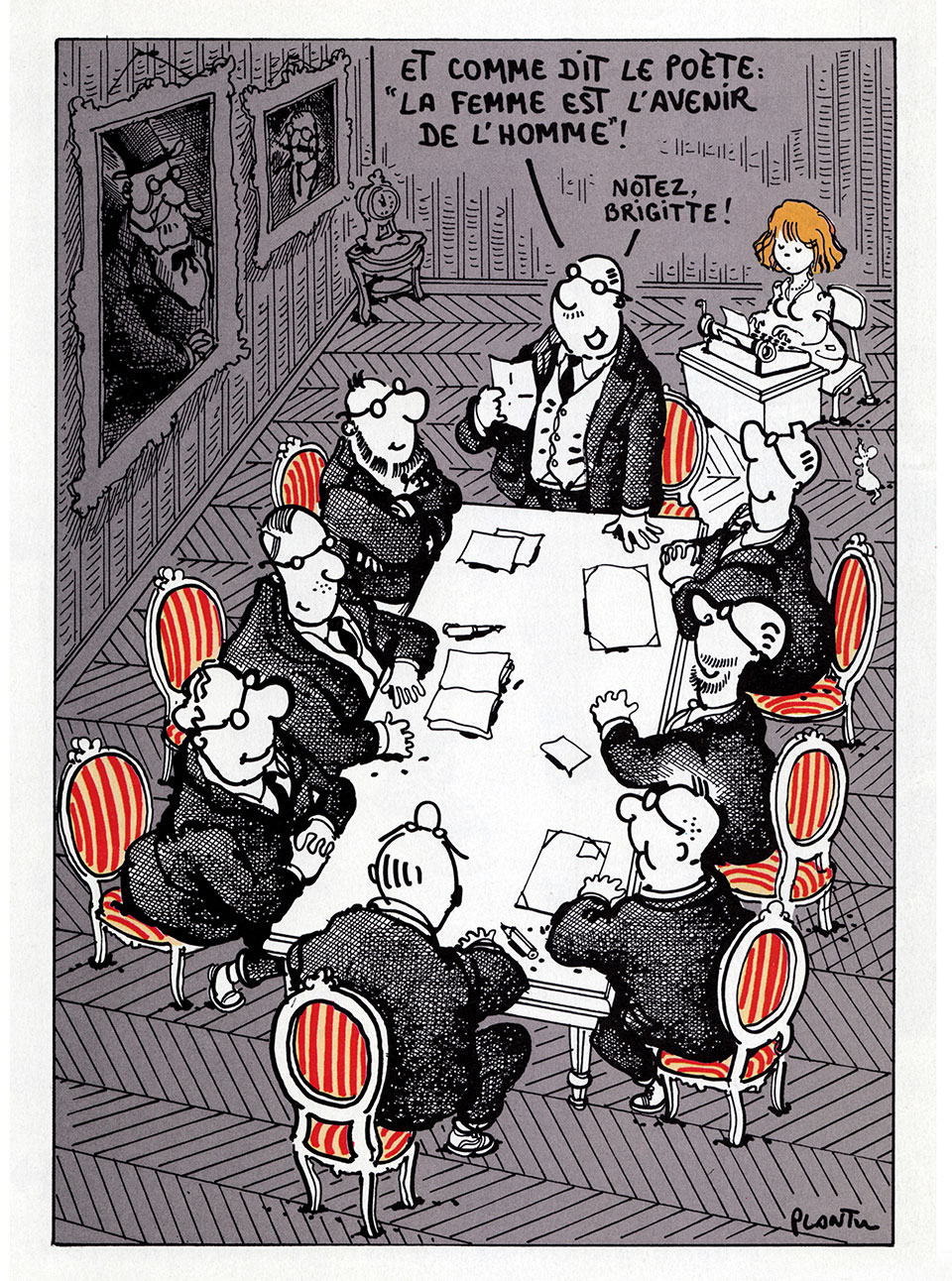 And, as the poet said: “Women are the future of manhood”.
Write that down, Brigitte.

French editorial cartoonist Plantu, published his first cartoon on Vietnam War in the newspaper Le Monde in October 1972. His drawings were regularly published in the headlines since 1985. He has also worked for the magazine Phosphore and the magazine L’Express. In 2006, Plantu and former Secretary General of the United Nations, Kofi Annan (Nobel Peace Prize winner in 2001) organized a symposium in New York, in which Cartooning for Peace was formed. 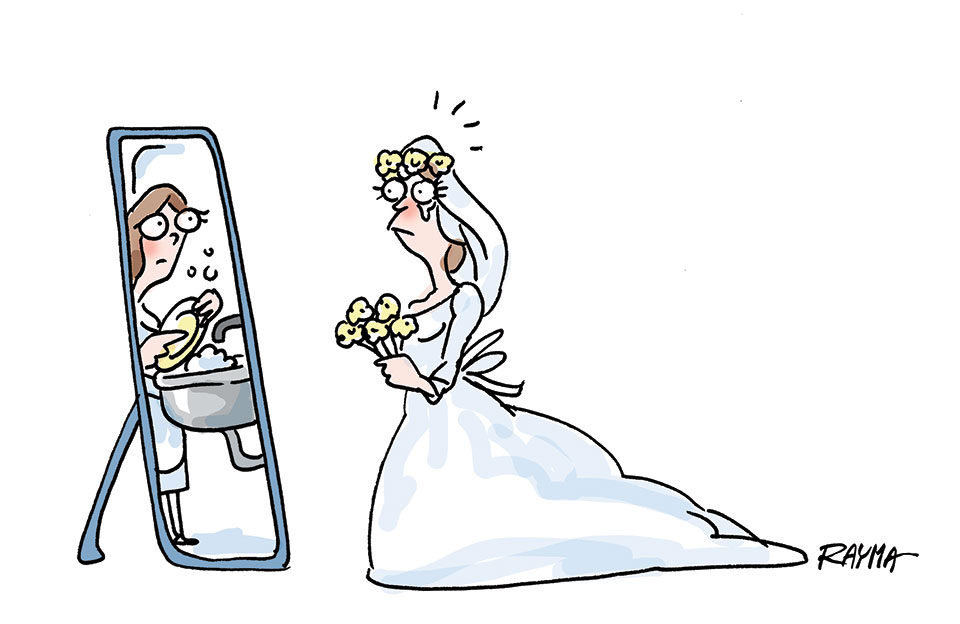 Rayma Suprani from Venezuela, has worked for various newspapers based in Caracas such as El Diaro Economia Hoy, the Diario de Caracas, and El Universal, where she was chief cartoonist for 19 years. Rayma has been threatened many times for her cartoons, and has become an advocate for the defence of human rights, having held an exhibition solely dedicated to the portrayal of women. 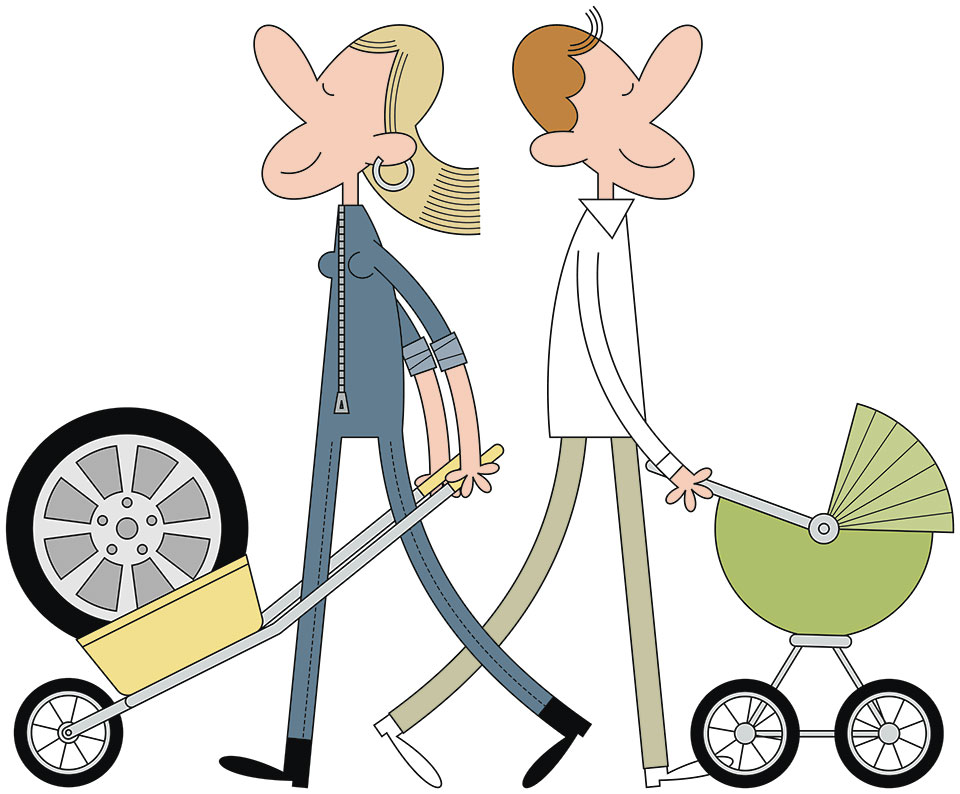 Cristina Sampaio from Portugal, has worked since 1986 as an illustrator and cartoonist for several magazines and newspapers in Portugal and abroad, namely Expresso, Kleine Zeitung, Courrier International, Boston Globe, Wall Street Journal and The New York Times. She has also worked in animation, multimedia and set design and published several children’s books. 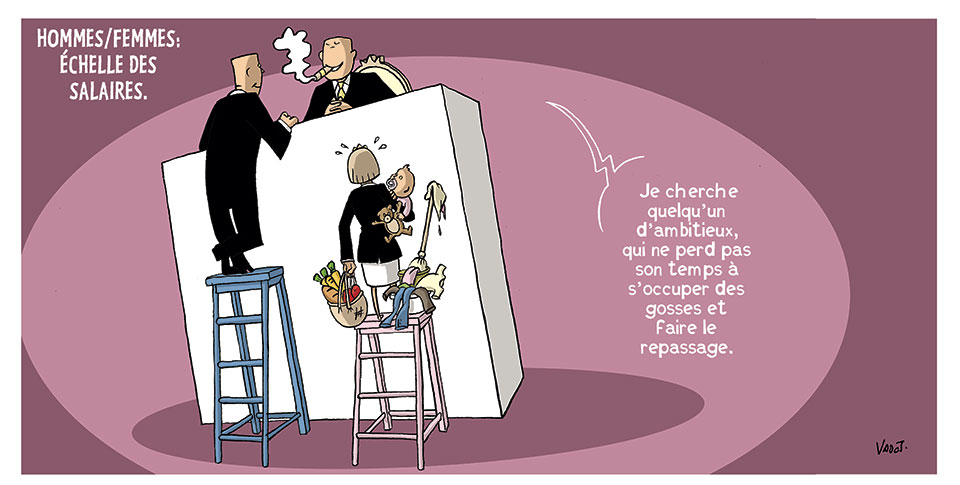 MEN/WOMEN: WAGE SCALE
I am looking for an ambitious person, who does not waste time taking care of the kids and ironing.

Nicolas Vadot, of French, British and Australian nationality, works for the weekly Newsmagazine Le Vif/L’express and Finance daily L’Echo. He also produces comic books and he has been a radio chronicler on RTBF since September 2011. 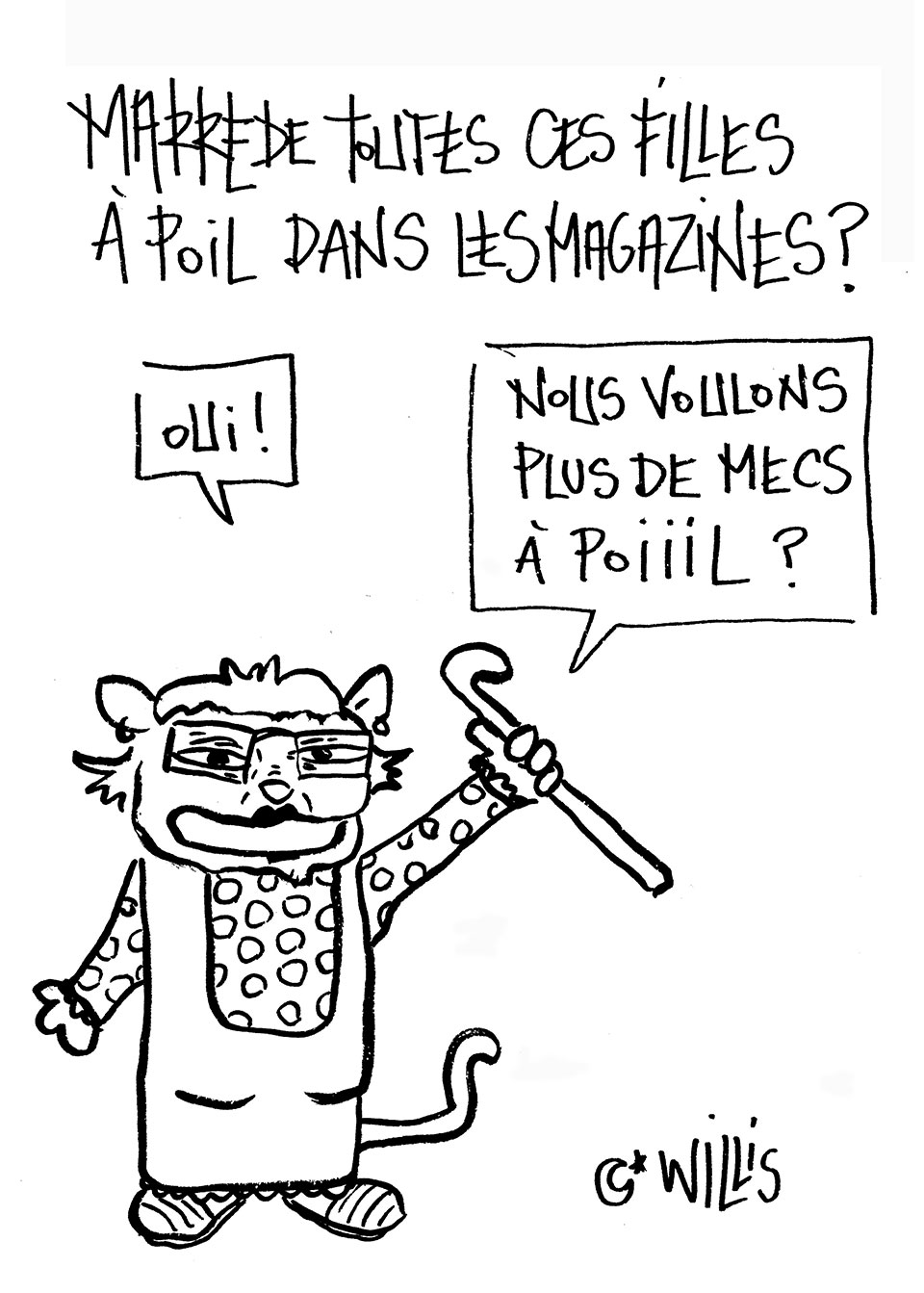 Are you fed up of seeing all those naked women in magazines?
Yes!
We want more naked guyyys!

Nadia Khiari (Willis from Tunis), from Tunisia, is an art teacher, a painter, a cartoonist and has authored several collections of chronicles about the Arab Springs. Her cartoons are also published in Siné Mensuel, Courrier International, Zelium. Khiari created the cartoon Willis the cat to express her feelings about the Arab Springs on Facebook and turned into a phenomenon.