From the internet to the bicycle, here are just a handful of innovations we take for granted today that have shaped the lives of women and girls worldwide. 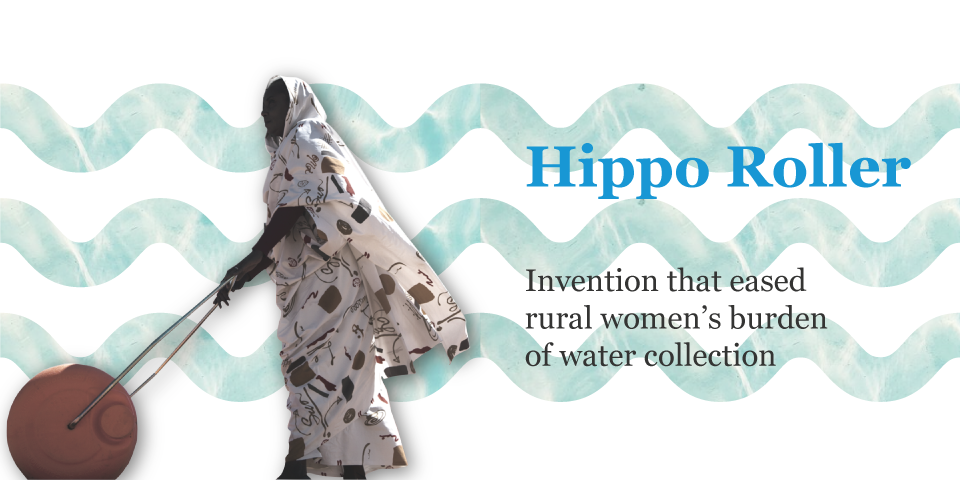 Access to clean water is a human necessity. You need it to drink, clean, cook, bathe and more. Yet, today 2.1 billion people — around 30 per cent of the world’s population — lack access to safe, readily available water at home. Unfortunately, for the millions of women and girls at the heart of the water crisis, especially in rural areas, the burden of fetching water falls disproportionately on them. This means an increased risk of violence in often treacherously long journeys to fetch water, and time taken away from other activities, such as income-generating work and school or even leisure and play — all of which prevents women and girls from living a full life. In an attempt to ease the strain and time involved to get water in tough rural conditions, two South Africans in the early 1990s invented the Aqua Roller, now commonly known as the Hippo Roller. A portable barrel-shaped drum container that rolls on the ground, the Hippo Roller can carry up to five times more water than a single bucket. To date, the invention has changed the lives of half a million people across more than 20 countries. While not a permanent solution to the water crisis, it along with other innovative solutions, such as the personal water filter LifeStraw, are noteworthy endeavors improving the lives of women and girls in rural communities. 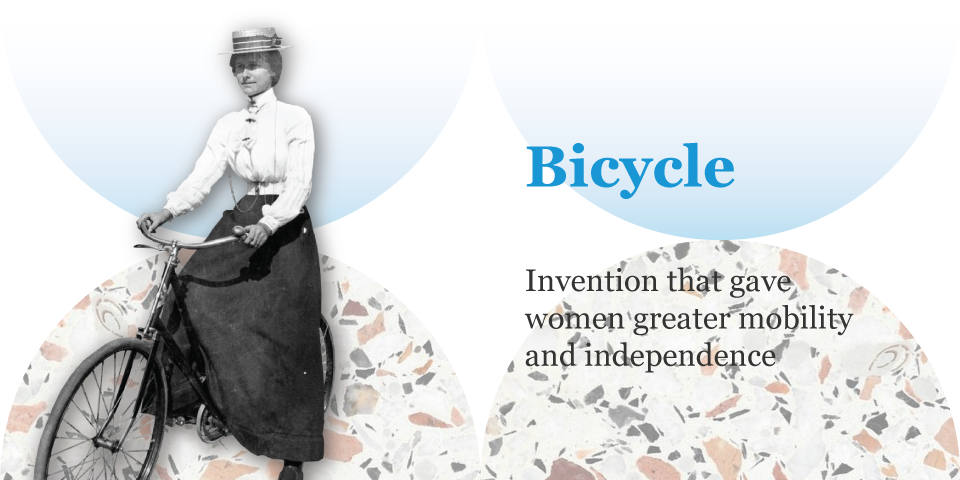 A symbol of “free, untrammeled womanhood” as American women’s rights activist Susan B. Anthony so eloquently put it, the bicycle gave women newfound freedom of movement, challenged stereotypes around women’s physical strength and transformed dress codes. Coinciding with the first wave of feminism, the invention of the modern bicycle, as we know it today, by an English engineer in the 1880s came about as an alternative to the now impractical penny-farthing that consisted of a large front wheel and a much smaller rear wheel. While not necessarily invented for women in mind, the bicycle ironically gave women independence: In some regions of the world at the time, this meant women could move around freely without having to rely on chaperones, carriages or horseback. Of course, it did not come without backlash: Women were warned riding bicycles was “immoral” and doctors even went so far as to say that it could lead to a terrifying medical condition called bicycle face — a special risk to women’s appearance and complexion. As wild myths circulated and the bicycle took off in popularity, women did not back down. Victorian women and reformists alike called for more rational clothing and baggier undergarments to ride bikes. And others, such as Annie Londonderry, a Latvian immigrant to the United States, challenged prevailing perceptions of femininity by becoming the first woman to ride around the world in a bicycle from 1894 to 1895. More than a century later, the race for equality still continues. 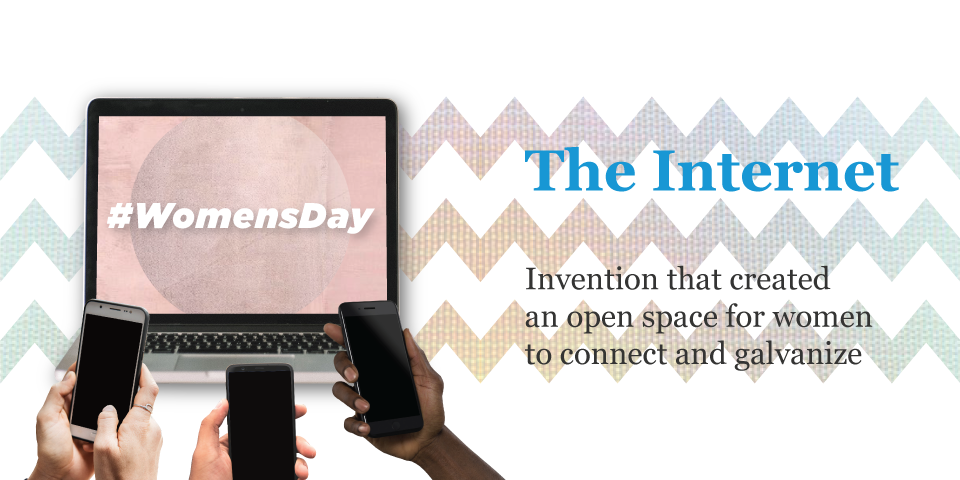 Similar to the advent of the printer, radio, television and phone, the internet has revolutionized how women and girls live their lives. Whether through websites, social media, instant messaging or email, it has opened up avenues for online activism, community-building, career opportunities and learning, increased awareness and engagement around women’s rights issues, and enabled women to set up businesses, political campaigns and more. From #MeToo to #NiUnaMenos to #TimesUp, social media movements in particular have exposed gender inequalities and violence against women unlike ever before and put pressure on public and private officials to enact change. Like any technology, the internet has its dark side: Offline inequalities, including misogyny, stalking, hate, harassment and trafficking, have permeated online. Misinformation on women’s rights threatens to roll back rights. And, for 49 per cent of the world’s population without access to the internet, the digital gap leaves the poorest and most vulnerable in the dark and without the adequate skills and education needed to survive in today’s rapidly evolving tech-enabled economy. Addressing this divide will be critical in the years to come. 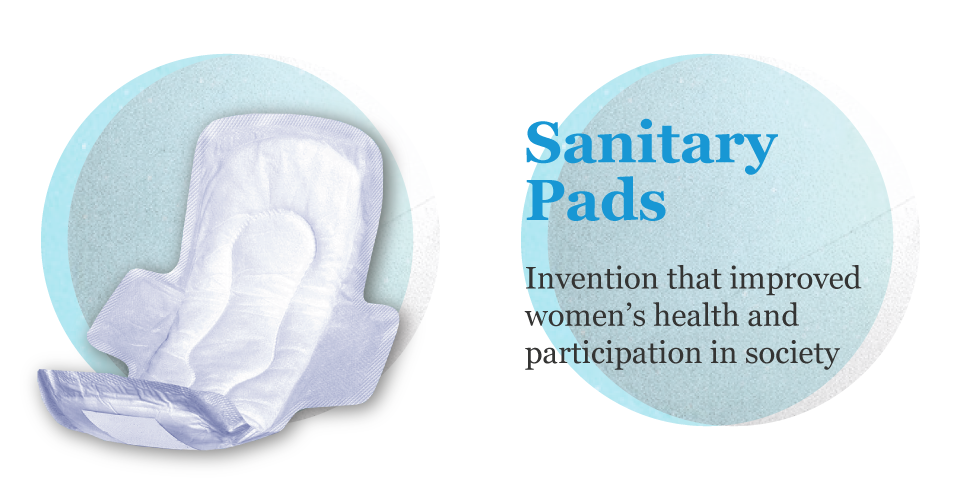 What if you had to use wool, moss, animal skin, old rags, newspapers or a sanitary belt for your periods? If it seems outlandish, it is — along with the more outlandish myths that women on their periods should be in solitary confinement, are dirty, can make food rot or even get eaten by sharks while swimming. Yet, it was only more than a century ago that nurses in France created the first disposable sanitary pads, incidentally to control excessive bleeding among male soldiers. By the end of the 19th Century, the first commercially available disposable pads came out, but took several decades before they evolved to become somewhat more practical for women to use and acquire (if you could afford it). The breakthrough invention improved women and girls’ hygiene and health, school attendance, livelihoods and economic opportunities. Yet, today, in spite of some efforts, sanitary pads still remain out of reach for millions of women and girls living in poverty and are taxed in several countries around the globe, including as a “luxury” item. Access aside, periods still remain a taboo topic. Stigma and discrimination surrounding menstruation prevents women and girls in some countries from entering physical spaces, such as their home, school, work or place of worship. If only there was an invention that could wipe out discrimination against women… 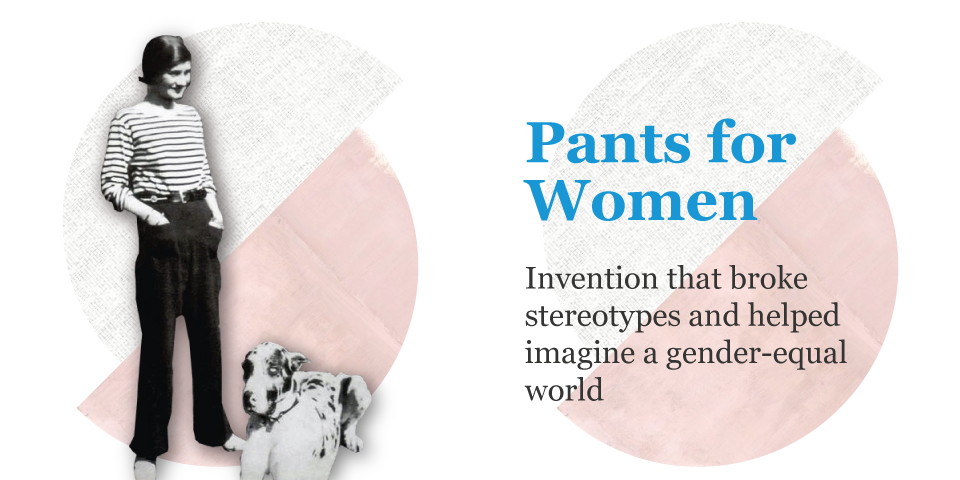 From pink hats to pantsuits, women’s clothes have the power to challenge stereotypes, transform notions of gender identity and symbolize resistance and power. And, well, sometimes it just boils down to practicality. Try riding a bike in a 15-pound Victorian dress. Pants would make sense, right? Well, not so much for sticklers reinforcing what a women’s place should be. In fact, the evolution of pants is a fascinating look into how fashion, feminism and sexism are inextricably linked. Take, for example, the iconic French war heroine Joan of Arc who famously cross-dressed in men’s armour, tunics and hoses. When burned at the stake as a heretic by the English in 1431, what was one of the most damaging charges against her? Wearing men’s clothes. Fast forward centuries later, women faced backlash for wearing baggy pants in the 19th Century and arrest for wearing such garments into the turn of the 20th Century. Like much of history, reality dictates fashion and fashion pushes boundaries: World War I and II, for instance, drove women to wear pants as they took on traditionally male jobs. As the world of work changed for millions of women, pioneers such as French designer Coco Chanel rocked the fashion world by laying the foundations for the pantsuit, a two-piece garment that post-war women entering the workforce adopted and today is a power symbol. And, for the millions of women in poverty working the fields or factories today, wearing looser, more traditionally male clothes is not so much a fashion statement but a necessity to be mobile, earn a living and put food on the table.