Women’s full and equal participation in all facets of society is a fundamental human right. Yet, around the world, from politics to entertainment to the workplace, women and girls are largely underrepresented.

The visualizations below take a closer look at this gender-imbalanced picture over time, revealing just how slow progress is. Rooted in patriarchal norms and traditions, the consequences are far-reaching with detrimental, negative consequences on the personal, economic and future well-being of women and girls, their families and the community at large.

Building a sustainable future for all, means leaving no one behind. Women and girls are critical to finding solutions to the biggest challenges we face today and must be heard, valued and celebrated throughout society to reflect their perspectives and choices for their future and that of the advancement of humanity.

How many more generations are needed for women and girls to realize their rights? Join Generation Equality to demand equal rights and opportunities or all. Share this piece today using #GenerationEquality, #IWD2020 and #CSW64.

Women’s political representation globally has doubled in the last 25 years. But, this only amounts to around 1 in 4 parliamentary seats held by women today.

In June 2019, the Fortune 500 hit a milestone with the most women CEOs on record. While every gain is a win, the sum as a whole is a bleak picture: Out of the 500 chief executives leading the highest-grossing firms, just under 7 per cent are women.

When looking at the workforce as a whole, the gender gap in labour force participation among prime working age adults (25 to 54) has stagnated over the past 20 years. Improved education among women has done little to shift deeply entrenched occupational segregation in developed and developing countries. Women continue to carry out a disproportionate share of unpaid care and domestic work. In developing countries, that includes arduous tasks such as water collection, for which women and girls are responsible in 80 per cent of households that do not have access to water on the premises.

Bestowed annually to recognize intellectual achievement and academic, cultural and scientific advances, the Nobel Prize has been awarded to more than 900 individuals in the course of its history from 1901 to 2019. Only 53 of the winners have been women, 19 in the categories of physics, chemistry, and physiology or medicine. Marie Curie became the first female laureate in 1903, when she and her husband won a joint Prize for physics. Eight years later she was solely awarded the Chemistry Prize, making her the only woman in history to win the Nobel Prize twice. Although women have been behind a number of scientific discoveries throughout history, just 30 per cent of researchers worldwide and 35 per cent of all students enrolled in STEM-related fields of study are women.

Source: The Nobel Foundation (Data as of 2019); Progress on the Sustainable Development Goals: The gender snapshot 2019, UN Women

When it comes to equality of men and women in news media, progress has virtually ground to a halt. According to the largest study on the portrayal, participation and representation of women in the news media spanning 20 years and 114 countries, only 24 per cent of the persons heard, read about or seen in newspaper, television and radio news are women. A glass ceiling also exists for women news reporters in newspaper bylines and newscast reports, with 37 per cent of stories reported by women as of 2015, showing no change over the course of a decade. Despite the democratizing promise of digital media, women’s poor representation in traditional news media is also reflected in digital news, with women making up only 26 per cent of the people in Internet news stories and media news tweets. Only 4 per cent of traditional news and digital news stories clearly challenge gender stereotypes. Among other factors, stereotypes and the significant underrepresentation of women in the media play a significant role in shaping harmful attitudes of disrespect and violence towards women.

Like other forms of media, film and television have a powerful influence in shaping cultural perceptions and attitudes towards gender and are key to shifting the narrative for the gender equality agenda. Yet, an analysis of popular films across 11 countries found, for example, that 31 per cent of all speaking characters were women and that only 23 per cent featured a female protagonist—a number that closely mirrored the percentage of women filmmakers (21 per cent).

The gross underrepresentation of women in the film industry is also glaringly evident in critically acclaimed film awards: In the 92-year history of the Oscars, only five women have ever been nominated for the Best Director Award category; and one woman—Kathryn Bigelow—has ever won. And, Jane Campion remains the only woman director to have won the Cannes Film Festival’s top, most prestigious prize, the Palme d’Or, in its 72-year history. The only other women to have received the prize—but jointly—were actresses Adèle Exarchopoulos and Léa Seydoux with the movie's male director Abdellatif Kechiche. If a picture is worth a thousand words, the message is worth a million: If we are to shift stereotypical notions of gender and reflect women’s realities, we need more women in film, on-screen and off-screen.

Source: The Official Academy Awards® Database (Data as of 2020); A Brief History of the Palme d’Or, Cannes Film Festival (Data as of 2019)

Sports has the power to inspire change and break gender stereotypes—and women have been doing just that decade after decade, showing that they are just as capable, resilient and strong as men physically, but also strategically, as leaders and game changers (Generation Equality pro tip: Watch Billie Jean King’s history-altering tennis match Battle of the Sexes).

Today, women are far more visible in sports than ever before: The Tokyo 2020 Olympics is projected to have close to equal representation of women and men competing for the first time in its history. For comparison, only 22 women (2.2 per cent) out of a total of 997 athletes competed in the modern Olympics for the first time in 1900. Women and men will compete in almost all sports categories with an exception: Rhythmic gymnastics and artistic swimming are women’s-only events and Greco-Roman wrestling is a men's-only event—although women can compete in freestyle wrestling.

Despite progress, women still continue to be excluded in certain sports in parts of the world and are paid far less than men in wages and prize money globally. UN Women is working to level the playing field for women and girls, including through partnerships with the International Olympic Committee, and UN Women Goodwill Ambassador and all-time top scorer of the FIFA Women’s World Cup Marta Vieira da Silva. 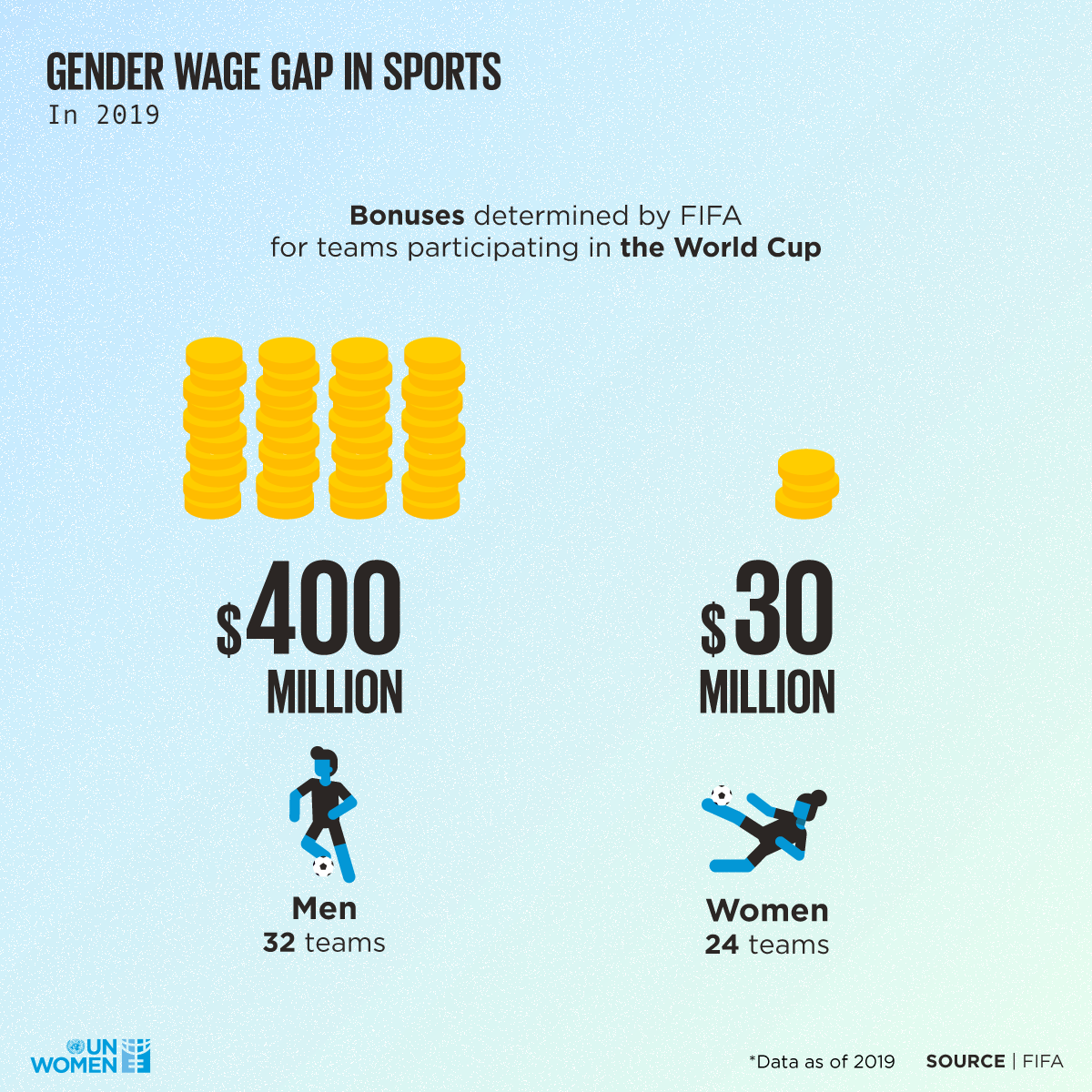 Despite women being prescribed stereotypical roles in the kitchen at home, the upper echelons of the restaurant industry have remained relatively closed to female chefs. As detailed in the documentary A Fine Line, women must often overcome active discrimination and navigate a culture that both glorifies masculinity and tacitly condones harassment. Paired with long, unpredictable and inflexible working hours, unfriendly family and childcare policies and lower salaries, women face enormous challenges when entering the restaurant business. The numbers match the story: Today, just under 4 per cent of chefs with three Michelin stars (the highest rating you can get) from the prominent restaurant guide are women.