(New York, 22 September) The first-ever global study on female characters in popular films, launched today, reveals deep-seated discrimination and pervasive stereotyping of women and girls by the international film industry. The study was commissioned by the Geena Davis Institute on Gender in Media, with support from UN Women and The Rockefeller Foundation and conducted by Stacy L. Smith (PhD) and her research team at the Annenberg School for Communication and Journalism at the University of Southern California.

While women represent half of the world’s population, less than one third of all speaking characters in film are female. Less than a quarter of the fictional on-screen workforce is comprised of women (22.5 per cent). When they are employed, females are largely absent from powerful positions. Women represent less than 15 per cent of business executives, political figures, or science, technology, engineering, and/or math (STEM) employees.

“The fact is – women are seriously under-represented across nearly all sectors of society around the globe, not just on-screen, but for the most part we’re simply not aware of the extent. And media images exert a powerful influence in creating and perpetuating our unconscious biases,” said Geena Davis, Founder & Chair of the Geena Davis Institute on Gender in Media.

“However, media images can also have a very positive impact on our perceptions. In the time it takes to make a movie, we can change what the future looks like. There are woefully few women CEOs in the world, but there can be lots of them in films. How do we encourage a lot more girls to pursue science, technology and engineering careers? By casting droves of women in STEM, politics, law and other professions today in movies,” she added.

Stereotyping also stifles women in prestigious professional posts. Male characters outnumber female characters as attorneys and judges (13 to 1), professors (16 to 1), and doctors (5 to 1). In contrast, the ratios tipped in the favour of females when it came to hypersexualization. Girls and women were over twice as likely as boys and men to be shown in sexualized attire, with some nudity, or thin.

“Females bring more to society than just their appearance,” said Stacy L. Smith, the principal investigator. “These results illuminate that globally, we have more than a film problem when it comes to valuing girls and women. We have a human problem.”

While the report shows how discriminatory attitudes that affect women and girls are reflected in film worldwide, it also points to some significant differences among countries. The frontrunners (UK, Brazil, South Korea) feature female characters in 38 – 35.9 per cent of all speaking roles on-screen. UK-US collaborations and Indian films are at the bottom of the pack, clocking in at 23.6 per cent and 24.9 per cent female respectively. Half of South Korean films featured a female lead or co-lead, as did 40 per cent of the films analysed from China, Japan and Australia. 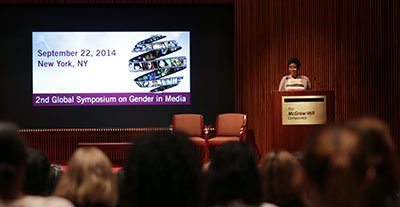 UN Women Executive Director Phumzile Mlambo-Ngcuka introduces the findings of a ground-breaking study on gender stereotypes in global films by the Geena Davis Institute at an event to present its findings on 22 September, 2014. Photo: UN Women/Ryan Brown

“Twenty years ago, 189 Governments adopted the Beijing Platform for Action, the international roadmap for gender equality, which called on media to avoid stereotypical and degrading depictions of women. Two decades on, this study is a wake-up call that shows that the global film industry still has a long way to go,” said UN Women Executive Director Phumzile Mlambo-Ngcuka.

“With their powerful influence on shaping the perceptions of large audiences, the media are key players for the gender equality agenda. With influence comes responsibility. The industry cannot afford to wait another 20 years to make the right decisions,” she added.

Across the films assessed, women comprised nearly one-in-four film-makers behind the camera (directors, writers, producers). Yet when films featured a woman director or writer, the number of female characters on-screen increased significantly. One obvious remedy to gender disparity on-screen is to hire more female film-makers. Another approach is calling on film executives to have a heightened sensitivity to gender imbalance and stereotyping on-screen.

“The evidence is even clearer now that what we see on-screen reflects the off-screen realities of women’s lives all too well,” said Sundaa Bridgett-Jones, Associate Director at The Rockefeller Foundation. “As we look to the future, The Rockefeller Foundation is committed to expanding opportunities for more broadly shared prosperity. For this to happen, we need to move beyond tired stereotypes that constrain women and men from realizing their full human potential.”

Key findings of the study include:

The full report is available at http://seejane.org/wp-content/uploads/full-study-gender-disparity-in-family-films-v2.pdf 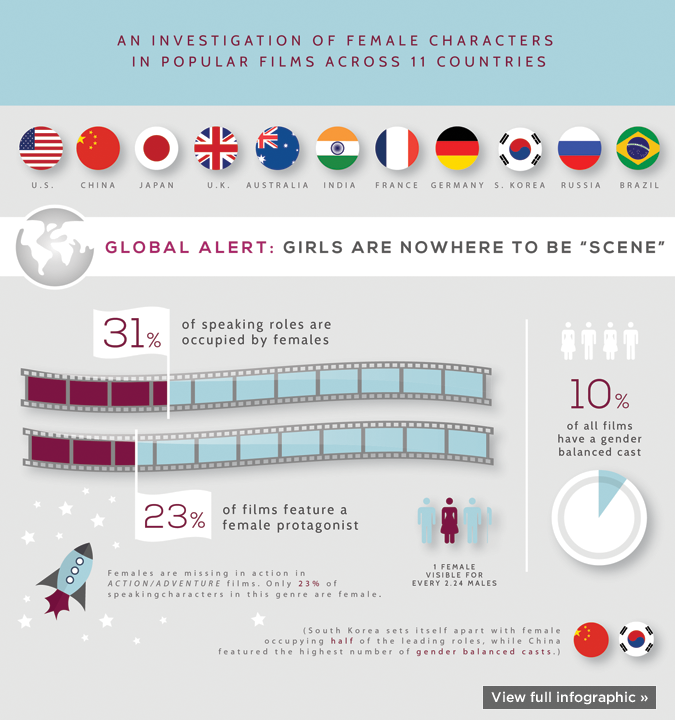 About UN Women:
UN Women is the UN organization dedicated to gender equality and the empowerment of women. A global champion for women and girls, UN Women was established to accelerate progress on meeting their needs worldwide. For more information, visit: www.unwomen.org .

About the USC Annenberg School for Communications and Journalism:

The Media, Diversity & Social Change (MDSC) Initiative is a leading think tank dedicated to addressing issues of inequality in entertainment. MDSC is part of the USC Annenberg School for Communication and Journalism. USC Annenberg is a national leader in education and scholarship in the fields of communication, journalism, public diplomacy and public relations. The school and MDSC emphasize leadership, innovation, service and entrepreneurship and draw upon the resources of a networked university located in the media capital of the world. For more information, visit: http://annenberg.usc.edu/MDSCI ; Annenberg.usc.edu and via various social media platforms.

Check out our Storify with social media coverage of the event: