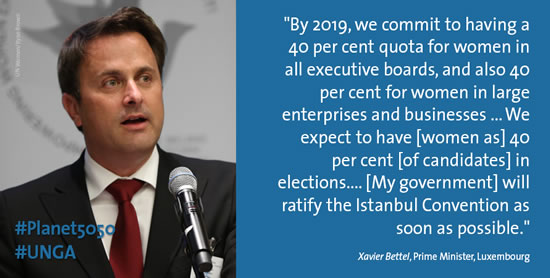 To eliminate inequalities in decision-making, especially in the political and economic spheres, Luxembourg expects to implement a very robust policy to achieve, by 2019, a minimum quota of 40 per cent of women on all executive boards in public establishments, and among stakeholders and shareholders of large enterprises and private businesses. Further, 40 per cent of candidates on party lists for elections will be women.

Luxembourg intends to make family and professional life more compatible, including by involving men, and will ratify the Council of Europe [Istanbul] Convention on preventing and combating violence against women and domestic violence as soon as possible.

Women and girls must have access to the same educational opportunities as men, especially in sciences and math, so awareness-raising campaigns will work to deconstruct stereotypes in the educational sphere.

Luxembourg commits to ending all forms of discrimination at the national and international level, and will sustain contributions to gender equality at the United Nations and UN Women.

Speaking at the Global Leaders' Meeting on 27 September 2015, Prime Minister Xavier Bettel said: “It is time for action. We will continue to make our contribution to the consolidation of equality between women and men.” [ Speech ]

Update, 24/02/2017: The Government of Luxembourg has taken several steps towards enhancing gender equality and women’s political and economic participation. For example, the proportion of women in boards has increased to 25 per cent in 2016. A new law adopted on 15 December 2016 ensures that political parties meet a minimum 40-per-cent quota for women in their lists for national elections and a 50-per-cent quota for European elections. An awareness campaign called votezegalite.lu aims at increasing the proportion of women in town councils.

Luxembourg has also introduced the principle of equal pay in the Labour Code. The Law of 3 November 2016 related to parental leave ensures that women and men have the same professional opportunities.

Work has also progressed towards the ratification of the Istanbul Convention, through the creation of an inter-Ministerial task force and sub-task force analysing the relevant parts of the Convention and the actions that need to be taken to fulfil its commitments.

Luxembourg’s voluntary contribution to UN Women has increased by 18 per cent over 2016. [ Full update (in French) ]

Update, 15/09/2016: The Government of Luxembourg has taken several steps towards enhancing gender equality, women’s political and economic participation. The Ministry of Economy has put in place a monitoring system that has shown an increase in the amount of women in boards from 22 per cent to 25 per cent between April 2015 and July 2016.

A draft bill was presented in October last year so as to ensure that political parties meet a minimum 40 per cent quota for women in their lists for national and European elections, or else their financial support from the State would be subject to a decrease.

Luxembourg has also presented a new draft bill concerning parental leave to ensure that women and men have the same professional opportunities. Also, a memory game about career opportunities has been distributed at schools as part of their effort to sensitize young people about gender equality, together with a book on the same topic addressed to children, their parents and teachers.

Work has also progressed towards the ratification of the Istanbul Convention, through the creation of an inter-Ministerial task force that is analysing the relevant parts of the Convention and the actions that need to be taken in order in order to fulfill its commitments. [ Full update (in French) ]