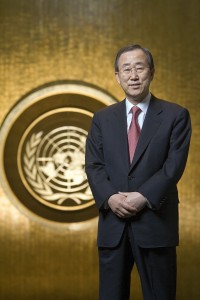 I welcome today's vote by the 64th General Assembly to merge the four gender entities of the United Nations into UN Women — the United Nations Entity for Gender Equality and the Empowerment of Women. I am grateful to Member States for having taken this major step forward for the world's women and girls. I thank Ambassador Tiina Intelmann of Estonia and Ambassador Ghazi Jomaa of Tunisia for their determination and skill in guiding the negotiations to this positive outcome.

Today's action does more than consolidate United Nations offices, it consolidates United Nations strengths. UN Women will significantly boost UN efforts to promote gender equality, expand opportunity, and tackle discrimination around the globe. It is also an important step in our wider effort to strengthen UN system-wide coherence to meet the challenges of the 21st century.

UN Women is a recognition of a simple truth: Equality for women and girls is not only a basic human right, it is a social and economic imperative. Where women are educated and empowered, economies are more productive and strong. Where women are fully represented, societies are more peaceful and stable.

That is why I have made gender equality and the empowerment of women one of my top priorities — from working to end the scourge of violence against women, to appointing more women to senior positions, to efforts to reduce maternal mortality rates.

Our challenge now is to make UN Women fully operational. I will continue my outreach with Member States and civil society in seeking a dynamic Under-Secretary-General to lead UN Women. I commend the leadership and staff of DAW, INSTRAW, OSAGI and UNIFEM for their commitment to the cause of gender equality; I will count on their support as we enter a new era in the UN's work for women.

Once again, I salute the General Assembly for its action. Women of the world look to the United Nations for leadership — and Member States have delivered.

Related News
23/06/2022
Op-ed: End the disconnect
23/06/2022
UN Women and UNDP report: Five lessons from COVID-19 for centering gender in crisis
17/06/2022
From where I stand: “I see positive change through the power of women’s organizations and adolescent peer groups in our community.”
08/06/2022
A comprehensive approach to ending violence against women in rural spaces in India
29/12/2021
Persisting in the pandemic: Youth activism during COVID-19
END_OF_DOCUMENT_TOKEN_TO_BE_REPLACED