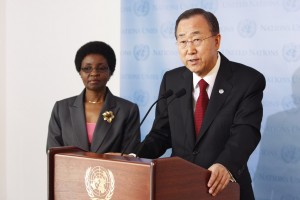 The new body — which will receive a large boost in funding and become operational in January — merges four UN agencies and offices: the UN Development Fund for Women (UNIFEM), the Division for the Advancement of Women (DAW), the Office of the Special Adviser on Gender Issues (OSAGI), and the UN International Research and Training Institute for the Advancement of Women (UN-INSTRAW).

“UN Women will promote the interests of women and girls across the globe, Mr. Ban told reporters in announcing the appointment. “Ms. Bachelet brings to this critical position a history of dynamic global leadership, highly honed political skills and uncommon ability to create consensus and focus among UN agencies and many partners in both the public and private sector.

“I'm confident that under her strong leadership we can improve the lives of millions of women and girls throughout the world.

Ms. Bachelet, Chile's first female president who prioritized women's issues throughout her tenure and since leaving office has been working with UNIFEM to advocate for the needs of Haitian women following January's devastating earthquake, was chosen over two other candidates.

The new entity is set to have an annual budget of at least $500 million, double the current combined resources of the four agencies it comprises.

“As you know the creation of UN Women is the culmination of almost four years' effort and today's announcement has been made possible thanks to the hard work of the Member States and the many partners who share our commitment to this agenda, and this has been a top and very personal priority of mine, Mr. Ban said.

He stressed that at next week's UN Summit on the Millennium Development Goals (MDGs) women and children will be “at the very core of our final push to realize the ambitious targets for slashing extreme poverty and hunger, maternal and infant mortality, rampant diseases, and lack of access to education and health services, all by the deadline of 2015.

“We have a little more than three and a half months, Mr. Ban said. “I will discuss this Sunday, when I appoint her formally, how we can make the process very speedy, so that we can appoint and recruit staff and we have to have our agendas. Basically we have all these structures in place. Now it is a matter of how we can speedily implement these structures and policy and visions.

“I ask all the Member States and civil community leaders, and governments, and business communities, to render their full support and cooperation.

Today's announcement follows a unanimous General Assembly vote on 2 July to create a dynamic new entity merging the four offices focusing on gender equality. One of its main goals will be to support the Commission on the Status of Women (CSW) and other inter-governmental bodies in devising policies.

It will also aim to help Member States implement standards, provide technical and financial support to countries which request it, and forge partnerships with civil society. Within the UN, it will hold the world body accountable for its own commitments on gender equality.