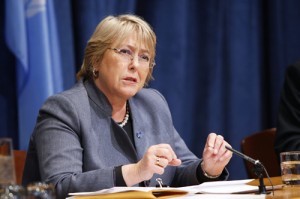 The new United Nations [entity] promoting women's rights and their full participation in global affairs will reinforce its presence in individual countries, as opposed to relying on regional representation, to more clearly understand the specific problems, its chief said today.

“Probably one of the more important issues is that we intend to strengthen at the country level the national capacity on working with women and that will distinguish the field work. We will continue to get closer to women every day, their reality and to better understand their needs, their concerns, UN Women Executive Director Michelle Bachelet told a news briefing in New York.

“We will be bold and ambitious but also practical in building an organization that can make a lasting difference to women's lives, she said, stressing the enormous capacity that women have as a key for development.

The new [organization] is set to receive a large boost in funding, eventually reaching $500 million a year and will be the largest entity ever devoted to eliminating gender discrimination.

Ms. Bachelet, a former president of Chile, laid out the complexities of the problems confronting UN Women. While 96 percent of the gap between women and men in the field of health and 93 per cent of the gap in education have been closed, 41 percent of the disparity in economic participation and 82 percent of that in political empowerment remain to be narrowed.

And she cited five core principles: enhancing implementation of international accords by national partners; backing intergovernmental processes to strengthen the global framework on gender equality; advocating gender equality and women's empowerment; promoting coherence within the UN on the issue; and acting as a global broker of knowledge and experience.

UN Women Head Michelle Bachelet briefs the press on the upcoming work of the organization, 25 January 2011.