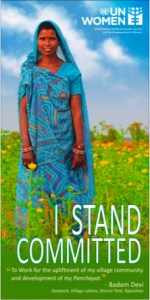 A first time village head, Badam Devi has made many positive changes in her community. (Photo: UN Women/Ashutosh Negi)

As she treads along the recently constructed road that connects the Panchayat office to her kuchcha village house in a harijan'basti (marginalized community), her gait is evident of her newfound confidence. Meet Badam Devi, a first time Sarpanch (village head) from Lahora in the Tonk district of Rajasthan, India.

“The villagers faced a lot of inconvenience while walking on the broken road, Badam says. “Vehicles got stuck on the road many times. Once a van carrying books for children was crossing the road and the books fell onto the dirty road and got spoiled.

“The incident touched my heart and the very day I decided to get the road repaired, she says. After facing hurdles in getting the funds approved for the road, she made a personal investment of Rs. 3000 rupees and got the road constructed in a year.

As an illiterate, shy homemaker and agriculture labourer, Badam hardly dreamt that one day she could work beyond the fields. In a short span of one year as a Sarpanch, she has learnt to identify and address issues of public importance and to get work done that falls within the realm of her Panchayat office.

It took time but she has learnt the procedural intricacies of government schemes on health, and education during trainings organized by UN Women and The Hunger Project. These trainings are part of a UN Women Programme, funded by the Norwegian Government, to develop capacity of women leaders participating in local village bodies and link women's everyday concerns to decisions made in village meetings.

Even though she never went to school, she understands the value of education for boys and girls. “If I were educated enough, I would have accomplished a lot", she explains.

She regularly monitors the schools in her village to ensure proper education and provision of mid-day meal to the children. To do this, Badam Devi earned the support of not only her ward members but also the staff at the public health facilities (Anganwadi centres).

Badam got elected as Sarpanch and won by a majority of 850 votes against her two opponent candidates belonging to the “upper caste.

“I will work for all the poor until I hold this position, she says proudly as she stands amidst the mustard fields in her village.