Addressing Violence against Women and Girls in Europe 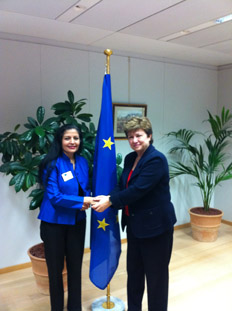 Allow me to thank the European Parliament for organizing this important seminar. It is a privilege to address this distinguished audience and participate in this public seminar on ending violence against women. I would like to particularly thank Mr. Gustafsson, the new chair of the FEMM Committee, for inviting UN Women and look forward to a continued strong collaboration.

Ending violence against women is at the heart of UN Women's mandate to empower women and advance gender equality, and free them from fear, abuse and exploitation. Each year, November 25 commemorations offer us the opportunity to both celebrate achievements, and honour the millions of women and girls around the world who are survivors of gender-based violence.

Today, the international community is witness to considerable progress in addressing violence against women and girls. From a UN global perspective, we are at a historic moment in time, when the issue has made its way from being relegated and downplayed as a `women's' issue; to being recognized as a priority public policy concern at high policy-making levels.

There has been accelerated progress in the adoption of national policies and laws in recent years; as in multiple international and regional inter-governmental agreements calling for strengthened action. These include the great strides made in the European Union, including of the European Parliament—achievements that I know many of you here have been architects of, like the report voted earlier this year of the former committee chair Ms. Eva-Britt Svensson on “Priorities and outline of a new EU policy framework to fight violence against women. We should also note the landmark adoption this year of the Council of Europe Convention on Preventing and Combating Violence against Women and Domestic Violence, to which some EU Member States are already signatories.

Despite much progress, we face many challenges. There's a serious accountability gap between policy promises and realities on the ground in too many countries of the world. Most laws and policies are adopted without budgets attached. Most women and girls who experience abuse never speak of the crimes perpetrated against them, nor seek help. They suffer in silence and shame, while perpetrators go free. Impunity is still the norm, rather than the exception: UN Women's Progress Report released earlier this year on access to justice reports that, in a cross-section of European countries, only an average of 14% of rape cases end in convictions of perpetrators.

The stark reality is that most women and girls in the world subjected to violence have nowhere to turn—especially so if they are poor, belong to especially excluded and vulnerable groups, are immigrants, or live in rural areas. UN Women is therefore appealing to all countries to make universal access to services a reality: wherever she may live in the world, every woman and girl suffering from violence and abuse should have access to at least a minimum set of services. Several of these represent women's emergency and practical needs in situations of violence- services for their and their children's immediate safety and safe housing, access to legal aid and justice, quality mental health support, post-rape care. Free, universal access to such fundamental services should be a bottom line measure of any country's fulfillment of women's human rights.

Ladies and gentlemen, violence against women and girls remains a global pandemic. Based on UN Women's analysis of national prevalence surveys around the world, some 10 to 70 % of all women have been subjected to sexual and/or physical violence in their lifetime. Most often, the perpetrators are their husbands and partners, or other men they know in their lives. Based on prevalence surveys from 20 countries in Europe, between 8 and 35 percent of women have experienced physical violence, and between 3 and 11 percent have been targeted for sexual violence in their lifetimes. Violence against women has devastating costs and consequences, not only to the lives affected, but to societies and economies as a whole. Violence against women harms women's health; restricts their freedoms, full agency and participation; erodes female productivity and human capital; and thereby undermines prospects for poverty reduction and development, peace and security, human rights and dignity. Indeed, violence against women translates into billions of dollars to public budgets every year - such as in health, police and legal services, and losses to employers.

We should remind ourselves that these costs and consequences to women's lives and rights, to children and families, communities and nations, are avoidable. Violence against women is learned behavior, deeply rooted in gender discrimination. It can therefore be unlearned, with multiple benefits to societies at large.

This brings me to the objective of this seminar, which is to “explore the state of play. Allow me to conclude by sharing some strategic directions and emerging areas which we consider critical at UN Women in order to intensify progress in addressing violence against women.

We need stepped up investments in prevention and comprehensive approaches concerning addressing violence against women, also here in Europe: prevention is the only way to stop the violence from occurring in the first place. Prevention starts early, in how we raise boys and girls to instill values of equality and non-violence, through educational systems, the mass media, and youth-centred programmes that engage parents, mentors and teachers. Working with men of all walks of life and with young people as champions for change, are two especially strategic groups.

To this end, UN Women partners with the international network—Men Engage Alliance— and with pro-equality men's groups at regional and national levels. We just participated in their launch of a new global fatherhood campaign, MenCare, which is part of this global movement to mobilize men on a more massive scale against gender discrimination and violence, and nurture new generations founded in improved gender solidarity and harmony.

We also support and partner with youth groups and youth-serving organizations on innovative efforts, such as with the World Association of Girl Guides and Girl Scouts -represented here in this panel by Ms. Cooper, the Regional Director for Europe. We firmly believe that young people around the world are an untapped and huge demographic for social change on ending violence against women. UNRIC, in coordination with UN Women, has organized a successful advertisement competition on the theme “No to Violence Against Women that included a Youth Prize. Strengthening youth leadership and activism is actually the lead theme of the UN commemorations taking place today in New York in the framework of the Secretary-General's UNiTE Campaign.

There are multiple other opportunities and emerging areas that hold potential for impact. This includes engagement with the private sector on corporate social responsibility, leveraging their resources, assets and reach—as employers, multinationals, mass media advertisers —always with the required degree of attention to ethical and human rights standards.

Yet in the end, alongside efforts directly addressing violence against women, the most effective means of accelerating progress is ensuring simultaneous, mutually reinforcing investments in gender equality more broadly — especially in strategic areas that are most closely associated with violence against women. These include getting girls through secondary school; guaranteeing women's reproductive rights; and empowering women economically and politically. All these aspects of women's lives are closely inter-related, and can serve as ‘protective' factors from violence. Alternatively, a woman who is economically dependent, with little control over childbearing decisions, tends to be at higher risk of abuse with all the affliction accompanying it.

In short, these critical investments in women's empowerment and gender equality— education, reproductive health, economic empowerment— are not only strategies to lift the unnecessary burden of gender-based violence by helping to prevent it; but in turn, offer high payoffs and multiple benefits to economies, national development and all members of society.

On behalf of UN Women, thank you for your attention and this opportunity.