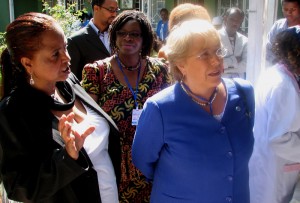 Through the tall gate, unremarkable from the street, is a place of refuge. Flowers spill along the paths that link a series of modest one-story buildings. The air is full of the sounds of laughter, music and dance, as today is a celebration of women's survival and strength.

Women and children cluster in front of the buildings. They have gathered to greet UN Women Executive Director Michelle Bachelet, who has come to see one of the few facilities in Addis Ababa, Ethiopia, that offers poor women shelter from gender-based violence. Many arrive at the Association for Women's Sanctuary and Development (AWSAD) shattered by abuse. They leave restored in body and spirit, having gained skills and the confidence to start new lives.

Ms. Bachelet listens closely as some tell their stories: “The police found me unconscious, with my lower teeth gone and my jaw broken by my husband, says one, bumps and scars still evident on her lower face. “They sent me to a private hospital, but I had no money, so they referred me here where they took care of my medical treatment. Now I am in good health and have learned the skills to work as a hairdresser. I'm so grateful and happy for the opportunity I got to lead a new, independent life.

Her husband is serving a seven-year prison sentence, after the shelter helped her pursue legal action. She worries about what will happen once he is released. Does it help to have the self-defense training that the shelter also offers residents? “Yes, yes, yes! she exclaims.

Another woman steps forward, elegantly dressed in a long purple wrap. “This compound is small, but it does a marvelous job of addressing a lot of problems, she declares. “We don't go without solutions.

She was bedridden when she arrived, devastated by the abuse of her husband and stricken by the news that she was HIV positive.

“Tears came when I found out, she says softly. “But I left a happy woman, with a child who is healthy. She stayed at the shelter for a year, before leaving to set up a small shop selling baby clothes. Today she returns to the shelter because she misses the people there.

“This is your big family, says Ms. Bachelet as they share a warm embrace.

AWSAD is a tribute to what a handful of women activists can do with some seed funding and a lot of commitment. Maria Munir Yusuf, the director of the centre and a former high court judge, leads Ms. Bachelet on a tour. They stop in the medical clinic, visit immaculate dormitories, admire handicrafts made by women learning sewing and embroidery and taste food freshly made by shelter residents. 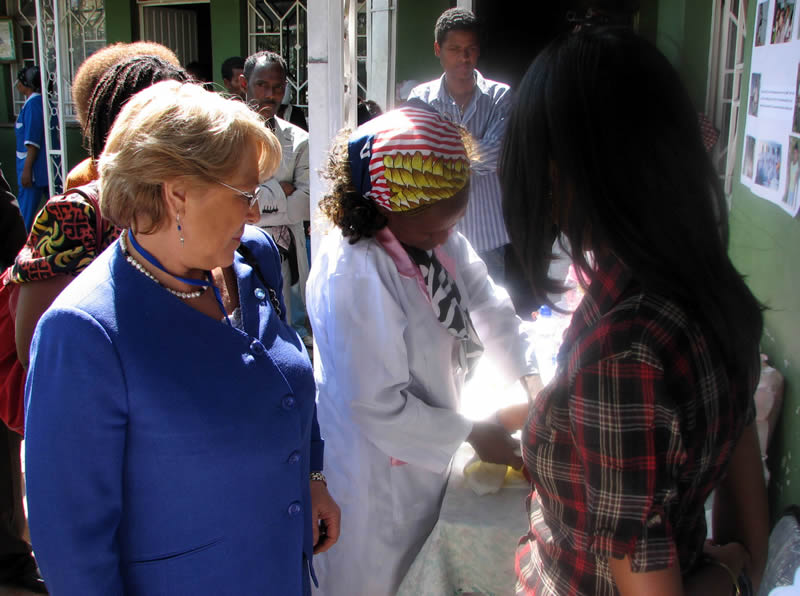 Yusuf points out that the idea for the shelter came from the realization that women survivors of violence had few support services — especially those who were poor. Like many countries, Ethiopia has legislation to stop violence against women, but limited systems to back implementation.

Even judges still tell women that instead of coming to court, they should turn to family or community elders for advice, many of whom simply pressure women to return to their abusers. According to national surveys, up to 60 percent of Ethiopian women experience domestic violence at some point in their lives.

“A lot of women come here with nothing. They can't even tell their story. We give them clothes, food, shelter, medical care, legal counsel, new skills — everything they need to change their lives, Yusuf says.

The shelter has room for 50, but the number of women and children in residence is often double that. Yusuf laughs. “We are women. We manage. And we never give up.

“This shows how much can be done, Ms. Bachelet says, sharing the story of how similar gaps in services were recognized during her presidency in Chile. With strong government support, 70 shelters were set up as a result.

She emphasizes the importance of women's economic autonomy to escape violence. “If you are poor and have no options, the abuse can continue for years. If you can acquire skills, and learn this is not the way it has to be, then you have many more choices.

AWSAD will open a second shelter in early February with UN Women's support. For now, after listening to the women's testimonies, Bachelet, Yusuf and dozens of shelter residents join in a dance in the courtyard under the warm winter sun. They celebrate progress — for individuals and the institutions that open doors to better lives.

Related News
09/01/2013
Remarks of Michelle Bachelet during her visit with internally displaced women at the Women’s House in Mali
01/06/2020
From where I stand: “Due to COVID-19 people were not going to the police”
28/11/2016
Survivors of violence find hope in shelters in Ethiopia
06/12/2013
A place to heal for domestic violence survivors
06/02/2013
UN Women Executive Director calls for bold action to end violence against women and girls during AU Summit
END_OF_DOCUMENT_TOKEN_TO_BE_REPLACED