Open Days on Women and Peace and Security 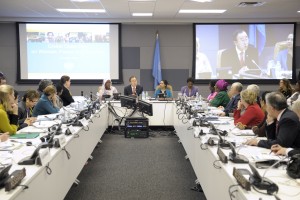 UN Women, in partnership with the UN Department of Political Affairs (DPA), the UN Department of Peacekeeping Operations (DPKO) and the United Nations Development Programme (UNDP), is commencing a number of “Open Days on women and peace and security worldwide from June through September 2011.

The Open Days provide a platform for local women leaders to speak directly with senior UN leaders at the country level to share their experiences, concerns and priorities as a contribution to national and regional efforts to resolve conflicts and build security. The outcomes of these events are expected to inform and influence policies and programmes related to the implementation of UN Security Council resolution 1325 (2000) as well as highlight challenges faced by women and their contributions to conflict resolution and peacebuilding.

The Open Days follow a tradition set in 2010 in the lead-up to the commemoration of the 10th Anniversary of UN Security Council Resolution 1325 (2000) on women and peace and security, during which a total of 29 Open Days enabled more than 1,500 local women leaders worldwide to voice their opinions on the topic with the aim to accelerate the resolution's implementation.

Reports on the 2011 Open Days will be made available on www.unwomen.org in the course of the year.