The 21st Century Will Be the Century of Girls and Women 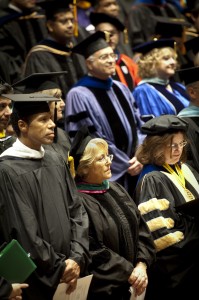 “The 21st Century will be the century of girls and women, declared UN Women Executive Director Michelle Bachelet at the 39th Annual Commencement 2011 of LaGuardia Community College. During the ceremony on 23 September 2011 at the Lincoln Center, New York, Ms. Bachelet was awarded with the Presidential Medal, the highest award granted by LaGuardia Community College to help spread education as its cause. In her keynote address to the graduating class — of which 62 percent were women — Ms. Bachelet stressed the key role education plays in building responsible societies. She also called on men and boys in the room to take part in the “social, economic and political revolution for gender equality and women's empowerment.

It is so wonderful to be here with all of you, the graduating class of 2011, and your families and friends for the 39th commencement of LaGuardia Community College.

I would like to thank President Dr. Gail Mellow for extending an invitation to me to deliver this keynote address. And I would like to congratulate all of you as graduates for this wonderful achievement that we are gathered here today to celebrate.

I'm very happy to be here with all of you in this beautiful and world-famous Lincoln Center. This week I've spent a lot of time running from meeting to meeting during this busy time at the United Nations, with Presidents, Prime Ministers and Delegates representing 193 nations.

I can see, looking at all of you, that LaGuardia Community College is a lot like the United Nations. Your student body represents the diversity of our world, with students coming from more than 160 countries.

I too have experienced much diversity in my life, living in Chile and the United States, and living in exile in Australia and Germany and these experiences have shaped who I am.

Another important element of my identity is my belief in public schools.

When I was younger, I went to public school in my native country of Chile and also here in the United States. And I am so pleased that LaGuardia and the Universidad Central have partnered to create the Community College de Santiago, which welcomed its first group of students last year.

I am the daughter of a father in the military, and I spent many of my childhood years traveling around my native country, moving from one military base to another, and attending various public schools.

When I was in junior high, my family moved to the United States, where I attended public school for nearly two years in Maryland, and learned to speak English. Then I returned back to Chile and graduated from a public high school, finishing near the top of my class.

I went on to study medicine in college.

My friends, I have built my career and my life on the education that I received in public schools.

And you know what?

I have been a doctor.

I have served as Minister of Health.

I have served as Minister of Defense.

And I was the first woman President of Chile.

And last year, I was appointed by the United Nations Secretary-General to be the first Executive Director of UN Women, a new UN agency that was created, by public demand, to advance women's empowerment and equality.

From exile to the reconstruction of my country, I have seen the world go through many twists and transformations.

And we are now on the eve of a new one. I believe that we are all part of a major transformation that is taking place.

The 21st century will be the century of girls and women. And I am not just saying this to you as the head of UN Women. Secretary of State Clinton echoed this belief in a very important speech she gave in San Francisco less than a week ago.

It is true that today girls in many countries girls are not given the opportunity to attend school.

It is true that today less than one in five legislators are women.

It is true that today only 20 of 193 nations are headed by a woman President or Prime Minister.

And it is true that everyday, 1000 women die from complications of pregnancy and childbirth for lack of medical care.

Yet, the tide is turning. So maybe there's only 20 women Heads of State now but that's a lot more than just a few years ago. Just two days ago, I witnessed Dilma Rousseff, the President of Brazil, opening the United Nations General Assembly. She was the first woman to do so since the creation of the organization in 1945. This was a moment that I will never forget.

And, all over the world, there is increasing understanding of the need to unleash the untapped potential of girls and women. We now have evidence to show that when women participate in parliament, and government, the benefits extend far beyond the individual to families, communities and nations. And studies show that companies with women on their boards earn more and didn't suffer as much from the economic crisis as companies without women on their boards.

So everyone is learning that empowering girls and women is not just the right thing to do, it is the smart thing to do. To all the women graduating today, I say seize this opportunity and go do things that your mothers and grandmothers could only dream of.

Now, let me turn to the other half of this room. I realize you might have felt a little left out when I said that the 21st century was going to be the age of women and girls. This is however a social, economic and political revolution that cannot happen without men and boys. For gender equality and women's empowerment are only part of a larger journey for social justice and democracy. A journey for which your generation is better equipped than any generation before. 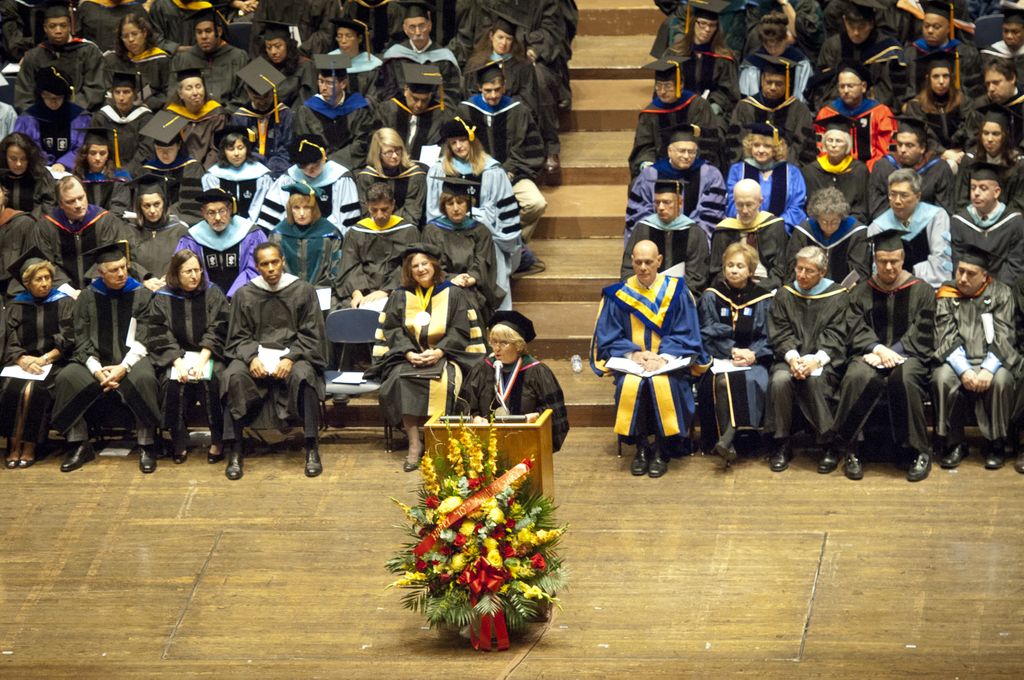 Recently we saw women AND men, young AND old, in the Middle East and North Africa, on the streets of Cairo, Tunis and Sana'a, demanding change and democracy by and for the people. They wrote blogs, sent text messages, snapped mobile photos and tweeted for justice and democracy.

Your generation IS the wired generation, the first to grow up with the whole world available at the touch of your fingertips and with your eyes on the screen.

Through your use of technology, you change the way we live and work and change the world we live in.

Your parents may be just like me with my children, and sometimes worry that you're too distracted and unresponsive, especially when we ask you to do something that you don't want to do.

But seriously, because you are the wired generation, you have learned skills and have at your disposal unprecedented tools, which allow you to learn new things every day, respond to things that are going on, connect with people around the world, and make great things happen—even change the course of history. In or out of college, these are learning tools that will accompany you forever.

Education opens many doors; it brings light where there is darkness. It helps us to better understand the human condition and human diversity and gives us an appreciation and respect of other cultures and civilizations.

At its best, education helps us to become informed and responsible global citizens. Education at LaGuardia gives you a unique perspective and experience—grounded in the reality of your everyday lives and struggles. What you've learned in community college about real life cannot be matched in the Ivy League.

Over the years, thousands of individuals have passed through the doors of LaGuardia, who have gone on to make valuable contributions to their fields and to society.

You might have heard of some of them. Rudy Washington served as Deputy Mayor to former New York City Mayor Rudolph Giuliani. Agata Oleksika, known in the art world as Olek, will show her art next year in the Smithsonian Institute. Nellie Borrero led Global Inclusion and Diversity in the global management firm, Accenture.

There are also all the others whose name you might never have heard but whose hard work and generosity have touched the lives of others. They are the everyday heroes, who cook a meal for a neighbor who is sick, who help their children with their homework, who assist their parents and grandparents, and in doing so, give back to their community and country.

During my professional life, I have devoted myself to public service. Public service can happen anywhere from your kitchen, to the community garden, to the local school, and why not to the seats of government, whether in Washington, or Santiago.

As the leader of Chile, and now as the leader of UN Women, I continue to uphold the values I learned in public school. And I will keep on championing equal rights and opportunities based on the universal principle that all human beings are born free and equal.

In my travels around the world, I have found that people share many of the same dreams. We want peace and justice. We want education for ourselves and our children. We want to live healthy and productive lives, and enjoy choices and opportunities.

These dreams represent shared aspirations that unite us in our common humanity.

If you are practical, and clear and honest in your intentions, you will accomplish so many great things. Believe me, I know from my own personal experiences.

So as you go forth in life, always remember where you came from, be a global citizen and do good for yourself and also for humanity.

I wish you all the best!

Related News
12/03/2014
Remarks by Executive Director at the a side event on Engaging Men and Boys to achieve the Millennium Development Goals for Women and Girls
07/03/2014
UN commemoration of International Women’s Day 2014: Speech by UN Women Executive Director Phumzile Mlambo-Ngcuka
08/10/2013
Innovating for Girls’ Education: Empowering for Equality — Phumzile Mlambo-Ngcuka
25/05/2012
Remarks by Michelle Bachelet at the first anniversary of UNESCO’s Global Partnership for Girls’ and Women’s Education
22/05/2012
Press Statement by UN Women Executive Director at the OECD Ministerial Council
END_OF_DOCUMENT_TOKEN_TO_BE_REPLACED