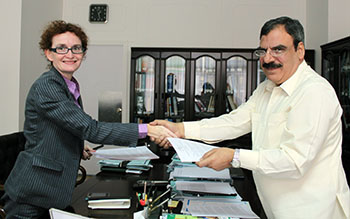 Women all over the world are often marginalized and unaware of their right to have a passport, driver's license and the crucial right to vote. These rights empower women, and give them a voice in society. Often they are uninformed of the processes, for example how to and register to vote and their political voice remains unheard. In Pakistan now, this is changing.

The database registers citizens and maintains the citizens database, and issues Computerized National Identity Cards. The Cards are a crucial piece of identification, necessary for passports, driving licenses, formal employment, for opening bank accounts, accessing social services and last but not least eligibility for inclusion in the voter's list.

According to a recent announcement from the National Database and Registration Authority over 86 per cent of the female population has been registered as compared to less than 50 per cent four years ago. As of August 2012, approximately 92 million Computerized National Identity Cards were issued of which 40 million were issued to women and 52 million to men.

Pakistan has emerged as one of the few countries in the world where 96 percent of the adult population has been registered through secure biometric technology. The national database is working on a war footing to ensure that the maximum number of citizens, particularly women, is registered in the shortest possible time in order to facilitate inclusion into the voter's list for the upcoming elections in 2013, and to facilitate access to education, health, decent employment, as well as social services.

Outreach efforts include extending its Data Acquisition Units to include mobile units to increase accessibility especially in remote areas. To encourage the registration of women, the Registration Authority Centers throughout the country are reserved only for women on Fridays, and 11 women-only NADRA centers with female-only staff have been set up.

With a goal of 100 per cent registration, the national database has expanded its infrastructure by 83 per cent, by adding more static offices, Mobile Registration Vans and Semi Mobile Registration Units. It is also reaching out to NGOs to increase public awareness and help facilitate women in obtaining their Cards.

The MoU, which has a five-year duration, is aimed at enhancing the partnership between the ministry and UN Women for human rights interventions in the country, through support for reporting on international conventions and instruments such as the Convention on the Elimination of all forms of Discrimination against Women, International Covenant on Civil and Political Rights, Convention Against Torture, and Universal Periodic Review.

The memorandum is also meant to support the strengthening of human rights institutions at the federal and provincial levels; and add technical support for issues related to legislation, policies and plans related to women's human rights.

Related News
14/11/2017
Standing up for survivors in the Shari’a court every day: Ayah al-Wakil is determined to leave no woman behind
05/11/2013
In rural Egypt, ID card programme makes inroads
11/02/2013
Q&A with H.E Khawar Mumtaz, Chairperson of the National Commission on the Status of Women, Pakistan
12/03/2012
Remarks by Michelle Bachelet at the National Conference: “Morocco on the Path towards Equality”
20/09/2022
Speech: Women leaders – decisive, effective and inclusive
END_OF_DOCUMENT_TOKEN_TO_BE_REPLACED