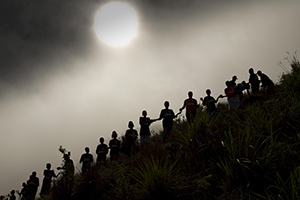 Workers pass rocks hand-to-hand as part of a planting and wall-building programme to save arable land and avoid flooding in lower areas in Haiti. UN Photo/Logan

Women and girls are often at the forefront of disasters, and amongst the most affected as they ensure the safety of family members before their own. Post-disaster, they are also the ones who often take on the responsibility and create the foundation of rebuilding their families and communities. As mothers, community leaders, teachers, activists, law makers, social workers and role models, women are invaluable in disaster risk reduction and climate change adaptation processes if sustainable community resilience and disaster reduction are to be achieved.

The experience, knowledge and expertise of women and girls are critical to climate change adaptation and disaster risk reduction strategies and processes. Studies show household adaptation measures are more likely to take root if women are included in processes from the beginning to end and it is essential that women and girls are actively involved in policy, planning and implementation processes for disaster reduction.

As the world observes International Day for Disaster Reduction (13 October, observed 12 October), Executive Director Michelle Bachelet calls for the invisible to be made visible by using the contribution of women and girls to improve preparations and responses to disasters. Their knowledge is vital to every strategy for disaster management and in building resilience in every community.

Recognise the strength of women and girls in reducing disaster risks!
A new publication by the UN System in Viet Nam and Oxfam, with contributions from UN Women and other UN agencies aims to recognize women and girls as dynamic actors in disaster risk reduction and climate change adaptation.

Rural Women in Viet Nam Train for a Rainy Day
The Women's Union building in Viet Nam's Binh Dinh Province is afloat with music, as traditional songs about the province, the seasons, fishing and farming drift through its rooms. Yet those singing know that the life they celebrate is under threat. Each has gathered here to discuss plans and actions for tackling natural disasters. Read more »

Leadership in Communities: Thai Women Preparing for Natural Disasters
For Chaluay Kawaonag, and her community in the province of Pathum Thani in Thailand, the flood waters that inundated their homes in October were not unexpected. But no one anticipated the extent of damage that the floods would cause. Read more »

40 million women registered with Computerized National Identity Cards in Pakistan
When a disaster strikes and women are not registered, they become faceless victims struggling to seek state assistance. But if they have an Identity Card they are in the Government system and therefore entitled to assistance, benefits and resources, and so are their children. Read more »