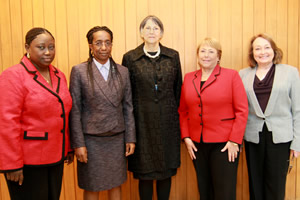 UN Women Executive Director Michelle Bachelet held a joint press conference on the work of the Special Court for Sierra Leone, especially on behalf of women, following the Court's briefing to the Security Council on 9 October 2012. The Special Court is the first in history whose principals - the president, registrar, prosecutor, and defender - are all women. Pictured from left: Claire Carlton-Hanciles, Chief Defender of the Court; Court Registrar Binta Mansaray; Prosecutor Brenda Hollis; Ms. Bachelet; and Justice Shireen Avis Fisher, President of the Court. (Photo credit: UN Women)

We are here today to mark an unprecedented moment. For the first time in history, all four Principals of an international court, the Special Court for Sierra Leone, are women — the President of the Court, the Chief Prosecutor, Chief Defender and the Registrar.

UN Women has consistently called for an increase in the number of women in all aspects of post-conflict recovery and peacebuilding, including in institutions of justice. We have concurrently called for enhanced access to justice for women for conflict-related gender-based crimes.

The Special Court for Sierra Leone has achieved both of these goals. In this respect it has, as an institution, contributed greatly to the implementation of UN Security Council Resolution 1325 on women, peace and security.

Through its charges and judgments to date, the Court has laid the foundation in international criminal law for the recognition of forced marriage, sexual violence as terrorism, sexual slavery and the recruitment and use of child soldiers.

Women are not just subjects of international justice but are critical actors in developing and leading international law. Under the leadership of the now Registrar, for example, the Court developed a model of gender-sensitive outreach, ensuring that women in particular, who are often information poor — could see justice being done for the crimes they endured.

While the Court is exemplary in contributing to the evolution of gender justice, these efforts require ongoing support. The Court currently faces a critical funding situation, and yet has much work that remains to be completed. Its ongoing mandate includes the finalization of cases, support and protection for witnesses, and the completion of handover. We also cannot let the opportunity pass us by without doing our utmost to document and learn from the remarkable advances made by the Special Court on prosecutions for gender based crimes.

It has been a privilege for UN Women to support the Principals of the Special Court to come and brief the UN Security Council today. In Sierra Leone, UN Women has also supported women's access to justice through other mechanisms, including the Truth and Reconciliation Commission, and ongoing support to the country's reparations programme through a grant by the UN Trust Fund to End Violence against Women.