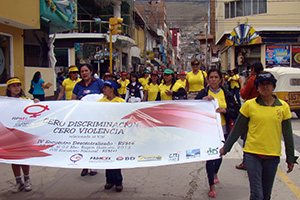 “I believe that, generally speaking, we tend to associate violence with manifestations of physical and sexual violence, and that we as women tend to overlook many additional forms of violence. In my own case, the fact that my husband's [HIV-positive] diagnosis was deliberately concealed from me constituted an act of violence, affirms Guiselly Flores, director of the Peruvian Network of Women Living with HIV (RPM+).

As a consequence of this concealment, today Guiselly is living with HIV and, worse yet, she suffered the death of one of her sons, who contracted HIV when Guiselly was unaware that she was carrying the virus.

Guiselly's story is far from unique, but has striking parallels with the life stories of many other women who are HIV-positive today in Peru - and now number between 14,000 and 25,000. Since first contracting the virus, over the course of the last 15 years Guiselly has demonstrated an unflinching commitment towards the fight for ensuring the rights of women living with HIV.

“We are concerned that every woman living with HIV in Peru is provided with access to comprehensive and high-quality health services, that these women are respected and provided with the full gamut of their rights, and supported also in their efforts to organize and to continue to make demands at the local, provincial and regional levels, so that their lives may be of vital concern to the decision-makers, states the director of RPM+.

Over the course of this year, Guiselly has been part of a project for which UN Women has been providing support, along with RPM+ and the NGO Promsex. The project aims to contribute to the reduction of violence and vulnerability of HIV-positive women living in Peru, strengthening organizations for HIV-positive women, and promoting full-fledged engagement by State agencies.

Among other achievements, the project has ensured that women themselves are in a position to identify and recognize the elements of gender-based violence in their lives, strengthening their claims for their rights and promoting participatory engagement. 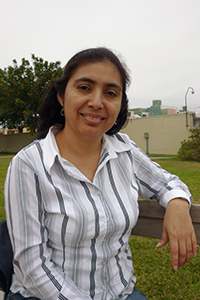 Guiselly Flores, director of the Peruvian Network of Women Living with HIV, lost a son and became HIV positive because she was never duly informed of her husband's HIV diagnosis. Photo credit: UN Women/Olatz Dominguez

Guiselly's life story is no exception. She chalks up her own personal experience to a “lack of recognition of the human rights of the other. Furthermore, she believes that her sexual and reproductive rights were violated when vital information was withheld, preventing her from protecting herself from her husband's HIV infection.

To make matters worse, Guiselly feels that the right to life of her baby was violated “because if I had been informed of the diagnosis in time, I would have stopped breastfeeding, and would have undertaken the necessary medical treatment.

Guiselly believes there is “a control of women's bodies with harmful consequences, such as HIV. She talks about how sexual coercion, which many women living today with HIV have experienced, is still not perceived by society to be violent per se. “It is still seen as natural, normal, even culturally acceptable that a man obliges a woman to have sex with him even when she does not want to, and even when it comes to reproductive rights, women continue to be controlled by men.

The due recognition of a vicious circle of violence has been another result of the project. Guiselly speaks of situations of violence that are experienced within couples in which one member of the couple is HIV-positive and the other member is not infected and the emotional blackmail which so often ensues as a result.

The women living with HIV in the Network are unremitting in their endeavour to make their demands visible, while denouncing the continuing violation of their rights. It is hardly surprising that these women are also known as the Peruvian Network of Positive Women.

“We should not wait for such horrible things as HIV to happen to us before we react, opines Guiselly. We are far too strong to just stand by and wait for things to happen to us, and we can show our strength to the world.

Related News
18/11/2022
Pushing forward: Dismantling anti-LGBTIQ+ discrimination in Argentina
13/07/2021
Press release: UN Women presents ‘A Force for Change’, an art exhibition and auction featuring work by 26 Black women artists, benefitting Black women
23/05/2019
From where I stand: “We are the solution in Brazil, not the problem”
17/02/2017
In the words of Luiza Karimova: “We were sex slaves”
04/03/2016
UN Women strongly condemns the murder of human rights defender and Honduran indigenous leader Berta Cáceres
END_OF_DOCUMENT_TOKEN_TO_BE_REPLACED