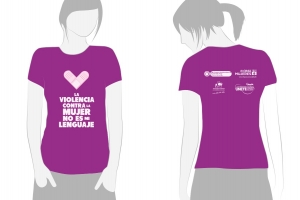 The winner of the UN's T-shirt design competition was created by 20-year-old Diego Quintero.

With a heart made of band-aids, the design of the T-shirt is simple yet powerful, as is the caption beneath it: “Violence against women is not in my vocabulary.

“From the outset, the message that we were keen to convey was to say to people, both women and men, that violence against women is not to be tolerated, not even in the words that we use in our daily vocabularies, and that we should all join forces to fight against this social problem, as soon as it rears its head, explains Diego Quintero, a 20 year-old Colombian graphic designer whose design for a T-shirt was selected in a competition jointly organized by UN Women and a number of other UN agencies in Colombia.

The contest was held in the context of the United Nations Secretary-General's campaign “UNiTE to End Violence against Women, which the Colombian government formally endorsed on 7 September. During the ceremony held to celebrate the endorsement, young men between the ages of 18 and 25 were invited to propose designs for a T-shirt that would contribute to the debate about gender-based violence. Targeting young men in particular is part of UN Women's mission to involve more and more men and boys in processes and initiatives with a view to achieving the full guarantee of women's rights.

Nineteen designs for T-shirts were received from various parts of Colombia and 15 of these were duly selected for voting on the website of the United Nations Information Centre in Colombia, a process that took place between 12-22 October, and in which more than 5,000 people participated.

The winning T-shirt will be worn in all cities throughout Colombia on 25 November, when local and regional leaders and women's organizations will take to the streets in a purple bike lane to say with one voice: “No more violence against women.

After the voting process, a jury composed of representatives of the Inter-agency Gender Working Group of the United Nations System in Colombia, the Presidential Office for Gender Equality, the Mayor of Bogotá, the Alumni Association of the University of the Andes, and a well-known advertising agent specializing in gender issues, chose the winning T-shirt from a short-list of the five that had received the most votes.

For Raquel Amaya Sofía, the advertising agent on the panel of judges, “Creativity, visual aesthetics, inclusiveness, consistency and coherence in the message, and a slogan that was proactive regarding the right of women to lead lives free of violence, were the criteria that were taken into account in choosing the winning T-shirt.

As with the winning T-shirt, the other four shortlisted designs invoked traditional concepts for rejecting all manifestations of violence against women. One T-shirt proposed replacing physical abuse with expressions of affection; another appealed to the concept of joining forces in order to eliminate gender violence; and another used motifs expressing emotional, symbolic and sentimental aspects of the problem of gender-based violence against women.

For the team that organized the competition, although several of the T-shirt designs either repeated or reinforced gender stereotypes, primacy was given to the fact that the design competition created an opportunity for young men to embark on the process of engagement, both in personal and societal terms, in reducing the prevalence of violence against women, reinforcing the message that it cannot be tolerated.

Related News
26/07/2016
Joint Statement by Phumzile Mlambo-Ngcuka and Zainab Hawa Bangura on the historic commitment by the Government of Colombia and FARC-EP at the Havana Peace Talks Table
07/05/2015
UN Women Executive Director to visit Colombia
21/05/2013
Art and commitment mix in vibrant hues to end violence against women
15/11/2021
From where I stand: “Our territories are our futures.”
12/11/2021
“There’s a long way to go”: Three women share their stories of overcoming political violence in Colombia
END_OF_DOCUMENT_TOKEN_TO_BE_REPLACED