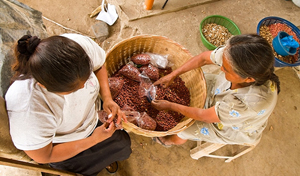 REDCAMIF and UN Women are working with urban and rural women entrepreneurs across Central America and the Caribbean to promote their economic empowerment. Photo: UN Women/Claudio Vasquez Bianchi

“I work with the people who go to the Central American trade fairs and I am so proud that our pieces of pottery are bought in other countries, says Francis Gutiérrez Cano, a Nicaraguan woman originally from San Juan de Oriente.

Francis is a potter. When she was very young, she began working in her father's workshop. That's where she learned all she knows about handicrafts. Now she is one of the beneficiaries of a partnership being carried out by UN Women and the Central American and Caribbean Microfinance Network (REDCAMIF).

Bit by bit, I became more independent. I started working with a loan from the microfinance agency Promujer (“Pro woman). I used it to buy my first machine and began producing my own pieces of pottery. I ended up paying off one loan and requesting another. Each loan was invested in the business. That way, I began to create an artisan's workshop. It took six years for my dream of having my own business become a reality.

Other women have similar stories to tell. Maria de los Ángeles Guevara, affectionately known as Doña Angelita, is a woman of 53 originally from the village of El Transito in the district of San Miguel, El Salvador. Doña Angelita learned the art of making bread in the year 2000. “A cousin taught me, she says. “Then I got credit and used it to buy my first oven and a bag of flour. That was how my family and I formally opened our bakery, it's called the ‘Manna Bakery'.

Before working with the microfinance company ASEI, Doña Angelita had only one oven which she used for making French bread. Now, thanks to her access to credit, she has been able to buy two more ovens. These days, she gets through 60 bags of flour a week.

Francis and Doña Angelita are both examples of what REDCAMIF is doing in the region. The seven national networks that make up REDCAMIF are: REDIMIF (Guatemala), ASOMI (El Salvador), REDMICROH (Honduras), ASOMIF (Nicaragua), REDCOM (Costa Rica), Redpamif (Panama) and REDOMIF (Dominican Republic). Through the 123 affiliated microfinance institutions, REDCAMIF supports over one million micro- and small businesses in the region with the provision of credit and skills training services. Women are in charge of 634,000 of those businesses.

“At the beginning only one of my children helped me; now the whole family works in the business, says Doña Angelita. “In total, we are eight workers, five of whom are vendors who distribute the bread.

“I'm achieving all the goals I have set for myself with the financial support of the network of micro finance, concludes Francis.

There are many such success stories of women entrepreneurs, a testimony to the important role credit plays in the economic growth and development of thousands of micro- and small businesses. 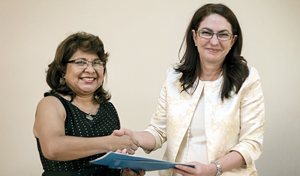 The President of RECAMIF, Jacoba Rodriguez Chirú, and the Regional Director of UN Women for Latin America and the Caribbean, Moni Pizani, signed a cooperation agreement on 23 November this year. Photo courtesy of Cronos Films.

The UN Women Regional Office for Latin America is working with REDCAMIF in order to foster microfinance services in the region, and to increase economic opportunities for women. The two organizations cemented their partnership recently by signing an agreement on 23 November this year.

The partnership between REDCAMIF and UN Women will support initiatives that encourage the economic empowerment of women in the Central American region. Efforts will focus on sectors where rural women in particular have fewer opportunities, such as commerce, tourism and agro-industry.

This will be achieved through access to credit, and training on production and business. For the latter, they will create a training package with short courses about how to create and manage a business. Finally, participants will exchange inspiring stories and successful practices through a mentoring system among new and more experienced entrepreneurs.