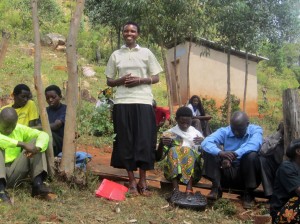 At a co-op meeting women explain how their lives have improved after becoming members. They can pay for their children's educations and medical insurances, and fear less of falling ill. (Photo Credit: UN Women/Ana Lukatela)

“I never thought I would be able to pay the school fees for all five of my children and our family's health insurance costs as well! exclaimed Euphrasia Musabyemariya.

She was one of the many participants at a recent meeting of the agricultural cooperative Ibyiza Birimbere (which means Moving Towards a Better Future in the Kinyarwanda language) located in the southeast corner of Rwanda in the Kirehe District, two and a half hours drive from Kigali. In 2010 the co-op leadership completed a training co-hosted by UN Women and the district authorities on gender equality and agricultural services, which enabled them to think about the needs of women and men farmers and on expanding their membership, with a focus on women members. The chairman of the co-op Evariste Tugirinshuti steered the organization towards becoming a platform to not only increase productivity but also equality between men and women.

The co-op encouraged the male members to bring their wives and other women farmers from their rural community into the fold. And the change has started yielding results.

“Before, my husband would leave for the co-op meetings in the morning and would never tell me anything that was going on and I never saw the money from the sale of the crops, says Euphrasia, one of the members who joined in 2010.

Previously while Euphrasia farmed her piece of land for subsistence, producing small amounts of maize and vegetables, her husband farmed his own plot with maize. Since joining the co-op, they decided to consolidate efforts and focus only on the production of maize. Their yield increased from under one tonne of maize to over 3 tonnes, per harvest. With a joint bank account and training on budgeting skills, Euphrasia today has equal access to the money that they make, and an equal say in household decisions and expenditures.

For Dancilla Mukamana, who joined at the insistence of other women farmers, a loan from the cooperative resulted in increased productivity on her farm. Today, she has managed to make home improvements such as a metal door and roof, and become a decision-maker in her household.

There have been other benefits from the training. Previously, part of the fertilizers provided by the co-op through government vouchers, often ended up sold by the men farmers across the border in Tanzania instead of being used on the crops. The cooperative instituted a policy that couples had to co-sign the fertilizer vouchers, which immediately brought the illegal sales to an end. The cooperative also began to strictly enforce the policy of only offering loans to farmers when co-signed by couples, in order to increase accountability. Just after a year, the cooperative's loan recovery rates had increased: statistics showing that women members were returning the loans at dramatically higher rates than the men. With increased productivity, dynamics in the community are also changing. While previously men and women sat separately in the cooperative meetings, barely ever speaking to each other, today they sit together, exchanging views and ideas on the cooperative's future.

UN Women works with 15 cooperatives in the Kirehe District of Rwanda to increase women farmers' access to agricultural services. Through the trainings, leaders across the cooperatives were encouraged to increase women's representation in their decision making structures and to prioritize opportunities to the most vulnerable women members.

A testimony to its success is the sentiment expressed by many of the women members, about the life they can now provide for their children and the future. “The most important thing now is that I no longer fear getting sick and not be able to farm or care for my children: I know I can afford health insurance and can go to the health centre.