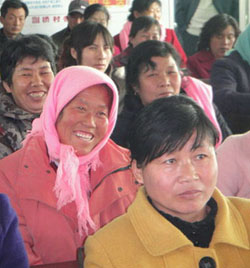 The university professors arrived to a packed conference room - yet those waiting expectantly were not their usual students. Instead, 62 out of the 70 trainees were female farmers from a small village in China's Ningxia Hui Autonomous Region, ready to be trained in cutting-edge water-saving irrigation technology.

Kuaiqiao Village is located in Qingtongxia, one of the oldest irrigated districts in Ningxia. The area has a typical continental climate, and its irrigation depends on the Qingtongxia Reservoir, which gets its water supply from the Yellow River. Due to climate change, the water flow of the Yellow River has become uneven, which results either in floods or droughts. If the region faces water scarcity during irrigation seasons, the productivity of the crops is directly impacted.

At the same time, many men in the district have left their villages to seek job opportunities in big cities, leaving behind their wives, children and elderly relatives. In addition to their traditional responsibilities women have therefore had to take on farming, and the climate-change related problems that now come with it. Yet because of deeply entrenched gender perceptions, they are typically excluded from decision-making on these issues, and many others.

In response to this problem, UN Women designed a project to enhance the role of these women in water management, keeping in mind that women are an important driving force in mitigating and adapting to climate change. The project is funded by AusAID and is aimed at empowering rural women and men in Qingtongxia by equipping them with advanced irrigation technology from Australia, and bringing in local experts, such as the professors from the China Agricultural University and China Irrigation and Drainage Development Centre.

As a result of the programme, which started in April 2011, 161 female farmers have been trained to use, manage and maintain the irrigation infrastructure, and to ensure the sustainable and effective use of irrigation water in their area. To further enhance villagers' understanding of gender equality, and the importance of women's participation, a local farmers' cultural troupe staged drama performances on the issue, while brochures with cartoons were distributed with stories centred on women's role in water management.

Meanwhile, advocacy workshops with provincial and local officials have trained and encouraged them to incorporate a gender perspective in their decision-making processes.
The results show: In a survey carried out in October, many women expressed readiness to make their voices better heard in village affairs.

Related News
11/03/2022
From where I stand: “Put indigenous women and our communities at the centre of climate action”
28/02/2022
Weather forecasts shift climate change impact for women farmers in Malawi
07/05/2021
How women in Ecuador are restoring a fragile ecosystem in the face of climate crisis
20/04/2021
From where I stand: “A better understanding of climate change has transformed the way we work”
15/04/2020
Roses in the battlefield: rural women farmers join the fight against COVID-19 in China
END_OF_DOCUMENT_TOKEN_TO_BE_REPLACED