UN Women Goodwill Ambassador Nicole Kidman has received the Humanitarian Award of the Kuwait-America Foundation for her work on behalf of women around the world, along with a donation of $250,000. The funds will benefit a UN Women initiative in one of Jordan's poorest rural areas to enhance women's economic empowerment. 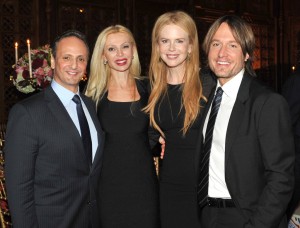 UN Women Goodwill Ambassador Nicole Kidman with husband Keith Urban, Sheikh Salem Al-Sabah, Ambassador of Kuwait to the US and Sheikha Rima Al-Sabah at the Annual Gala of the Kuwait-America Foundation on 11 March 2012. (Vicky Pombo Photography)

“I gratefully accept this award on behalf of a rather large group of people: the women of the world. As the Goodwill Ambassador of UN Women, I have seen that there is no limit to what women can achieve when given the opportunity, said Nicole Kidman at the Foundation's benefit gala dinner in Washington.

She continued: This is why UN Women puts strong emphasis on women's economic security and political participation. Women need to be able to take the decisions that shape their lives and their societies. Economic autonomy means greater independence in all aspects of life: it helps women to feed their families and send their children to school so that they can get a proper education for a better future. Having an income can also provide a way out of a violent home. Working with UN Women, I have learned about the horrific scope of violence against women around the world and seen its devastating impact.

The Kuwait-America Foundation's contribution will support UN Women's work in the Al-Mafraq governorate in Jordan to help women set up their own small businesses, including by being able to tap into a revolving fund, and to acquire new skills that will position them better to find jobs.

Despite major improvements in women's access to education, social status and citizenship, women's economic participation remains low in Jordan and has been trailing behind most countries at the same socio-economic level.

Statistics from 2009 indicate that merely 14.9 per cent of the Jordanian female populations over 15 years are economically active compared to 64.8 per cent of males.

About 20 per cent of Jordanians live in rural areas where poverty is more prevalent than in urban areas. Some of the most vulnerable groups of women, excluded from economic participation, are those living in the areas classified as “poverty pockets by the Government.

One of the poorest governorates in Jordan is Al-Mafraq, with a total population of 281,000 and a poverty rate of 31,9 per cent .

“I know that these women will make a difference not only for themselves, but for their families and societies, said UN Women Goodwill Ambassador Nicole Kidman acknowledging the financial support. Thank you for making this possible.