A parade inaugurated by Princess Sumaya bint El Hassan of Jordan celebrated women's participation in the Information Communication Technology (ICT) sector earlier this month. On 7 May at the Hashemite University, Fifth National Technology Parade welcomed hundreds of visitors, as more than 200 students from Jordanian universities showcased their work. Many came from a programme supported by UN Women, to bring more female students into ICT fields.

“I am glad to say that this event today marks an increasing awareness of the importance of gender equality in education, said the Princess, in her opening speech at the parade. “We must remind ourselves constantly that the benefits of equality are obvious for national development and for natural justice.

As a partnership between UN Women, Cisco Systems, Cisco Foundation and the Government of Jordan, “Achieving E-quality in the ICT Sector addresses issues of the digital gender divide. By working to enhance Jordanian women's skills, knowledge and access to information, it encourages them to strive for higher positions in the sector.

The programme has incorporated an IT certification programme into curricula at different levels. It has seen over 4,000 female and male students enroll, and 2,165 graduate since 2002. Graduates obtain the globally-recognized Cisco Certified Network Associate (CCNA) certification, and are then linked to the job market through a placement programme in Jordan's public and private sectors. Advocacy activities have aimed to make workplace environments more women-friendly and accommodating for both genders. 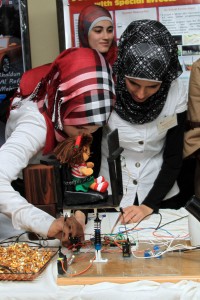 There are no laws or policies that create equal opportunities in the field or explicitly address equitable pay scales. Working conditions often do not fit the traditional expectations or customary lifestyles of women in the country, while women tend to lack the mentors and social support to make the transition into the workforce. Most ICT companies express a reluctance to hire women, compared to men.

At the parade, university students showcased their grasp of modern technologies with projects spanning renewable energy and water to robotics. Promisingly, more than 50 per cent of the financial prizes, two sponsored by UN Women, were awarded to projects by female students.

Meanwhile, other efforts to increase women in the ICT industries include a new partnership between UN Women, the Ministry of Communication and Information Technology, and the Ministry of Labour, which aims to increase the employment rate of female graduates by cost-sharing the wages of women hired under the Graduates Internship Programme. The programme will work towards a 50 per cent proportion of female enrollment rate, with a target of 100 women joining the force in 2012.

Related News
19/06/2020
Connected by their phones, women peacebuilders lead COVID-19 prevention efforts across Libya
31/03/2020
I am Generation Equality: Ibtsam Sayeed Ahmed, champion for women, education and disability rights
07/02/2020
Devoted to discovery: seven women scientists who have shaped our world
23/04/2019
From where I stand: “Girls have to contribute towards innovation and technology”
18/09/2018
Press release: UN Women and WFP harness innovation for women’s economic empowerment in crisis situations
END_OF_DOCUMENT_TOKEN_TO_BE_REPLACED